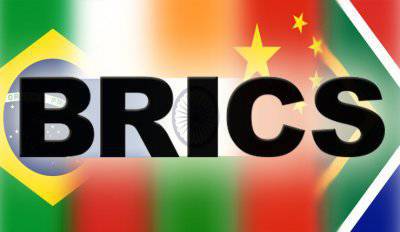 At the recently held G20 summit, the BRICS countries agreed on joint financial support. The five participants approved the creation of a development bank with an authorized capital of 50 billion dollars. In addition, there is a pool of foreign reserves in the amount of 100 billion dollars. The purpose of the bank is to take preventive measures against overseas partners intending to curtail the quantitative easing program (QE). Western investors have been withdrawing funds from developing countries for half a year, which affects the rates of national currencies. Some economists and analysts believe the decision of the BRICS dwarf, in terms of its scale within the framework of the modern global economy, does not promise anything serious. As for Mr. O'Neill, who once invented the acronym "BRIC", he is generally ready to leave a single letter from his "brainchild". Which one? Read the article.


Patrick Bond ("Daily Maverick") asked the question: can the BRICS countries in any way contribute to the restoration of the collapsing global financial architecture? How much does the BRICS development bank, which was announced at the G20 summit, differ from its Western counterparts? Will this infant be able to challenge the Bretton Woods institutions in the chaotic financial world in the coming years?

Indeed, for nearly seven decades, the expert notes, the World Bank and the International Monetary Fund have been operating, created to restore Western banking systems after the Great Depression and World War II. Surely the BRICS countries set out to replace Washington and its neoliberal ideology?

The author considers this to be nothing more than rhetoric.

50 billions of BRICS share capital will not be able to argue with the World Bank’s treasury. Yes, and 100 billions of dollars in the currency pool will be quickly exhausted - in the event of a serious financial crisis. True, these amounts may be increased in the coming years. And yet, they are microscopic in the face of the needs of emerging markets. Since the middle of the 1990, many countries have needed multibillion-dollar recharge.

But the blame for the announcement of policy changes from the US Federal Reserve. It is expected that the Fed will be less artificially stimulate the economy, i.e., carry out "quantitative easing". A statement about this has already led to a “dramatic” outflow of capital from emerging markets, as well as to the fall of the South African, as well as the Brazilian and Russian currency, and especially the Indian currency.

Goldman Sachs banker Jim O'Neill, who asked Wall Street Journal last month about an acronym ten years ago, answered the question: “If I had to change it, I would just leave the letter“ K ” .

As China Daily wrote recently (a newspaper reflecting official sentiment), local experts predict: BRICS is pushing China forward. Economist Lee Dokui of Tsinghua University commented that the end of quantitative easing by the Fed is “a good news for the yuan, ”and“ the BRICS concept could disappear, leaving only China next to other developing economies. ” According to Lu Dean, economist at Merrill Lynch, the author further notes that China will be largely insured against harmful external economic effects due to "a steady current account surplus, low external debt, huge reserves, high savings and capital flow control."

Thus, the analyst concludes, it would be wise to adhere to skepticism regarding the new BRICS bank. And if the “experiment” of the BRICS takes into account geopolitical factors, the world economy is currently working against the initiatives of the BRICS. Syria, an interception of the NSA, including the president of Brazil, and so on, is one thing, but the economic strategy, which, according to the author, is absent in the BRICS countries, is quite another ...

As transmits "Business TASS", at the G20 summit, special attention was paid to the problem of curtailing the quantitative easing program of the US Federal Reserve. A statement on the possible completion of this program this year, made in May by Ben Bernanke, caused an outflow of capital from emerging markets and a weakening of the currencies of many countries.

“Now our partners are beginning to emerge from non-standard measures of financial and economic policy, and this may affect the state of key global risks, affect the economies of other countries,” said Vladimir Putin, stressing the need for “timely adoption of additional preventive measures both at the national and global level. "

The head of the People’s Bank of China, Zhou Xiaochuan, said: “Creating a pool will help stimulate the economic growth of the BRICS countries and stabilize the global financial system.”

What will the money be spent on?

As noted by Tatyana Golovanova ("Voice of Russia"), funds will be invested in infrastructure projects of developing countries. A pool of foreign exchange reserves is created to improve the macroeconomic performance of the BRICS countries. In fact, the currency pool will become an alternative to the World Bank and the IMF and should reduce the impact of the dollar on the BRICS economies, the journalist said. Indeed, since May 2013, the gold reserves of developing countries have declined by more than 80 billions of dollars. Russian Finance Minister Anton Siluanov believes that creating a currency pool will help prepare for the consequences of the new Fed policy.

Other countries and international financial organizations can then join the bank. The bank will lend to the BRICS countries and invest in the real sector of the economy: infrastructure construction and industrial projects. No, not necessarily within the boundaries of the BRICS, but in other developing countries. It is believed that the available money will give impetus to the innovation sector.

The BRICS Development Bank will be funded by member countries from taxpayers' funds, Deputy Finance Minister Sergei Storchak told 6 on September 10 at a briefing.

“The agreements that exist today stipulate that the finance ministries form the capital of the BRICS bank. These are means of the budget, means of taxpayers ", - quotes him RBC.

However, a pool of reserve BRICS currencies will be formed differently. According to the Deputy Minister of Finance, the pool is designed to quickly respond to sharp fluctuations in foreign exchange markets. “Participation in the currency pool is carried out at the expense of international reserves, which are managed by national banks or a state bank,” he explained. To this Storchak added: “No wonder this pool is called“ virtual. ” We are talking about the achievement by central banks of an agreement that a legal environment is being formed that will allow, if necessary, to conduct swap operations promptly. According to the deputy minister, against the national currency in this case, the delivery of dollars by members of the pool to the interested party will be made.

As for the fall of the nationalities of the BRICS countries, the Roman Markelov ("Russian newspaper") recalled, referring to the words of Finance Minister Anton Siluanov, that the ruble has weakened by 7-8% since the beginning of the year, the Indian rupee by 20%, and the Brazilian real by 16%.

Now let's take a look at the question from China, based on the opinion of Shi Jianxun, director of the Research Institute of Economics and Management of Tongji University, published not so long ago in "People's Daily".

The author calls the very foundation of the BRICS Bank not only an economic event, but also a decision that demonstrates the political position of the member countries of the group in the international arena. The bank is a symbol of the union of the most dynamically developing economies of the world and a sign of the rise of countries with emerging markets in the 21st century, the expert said.

The author is sure that the BRICS Bank will turn into a platform for the further promotion of the reform of the international financial system by the five countries: after all, the BRICS countries are the main borrowers of the World Bank and at the same time they increase investments in the IMF. At the same time, in the two international financial organizations mentioned above, the West plays a leading role.

So, the geopolitical goal of BRICS Bank is clear: the opposition to the global financial system, controlled by the West, primarily the United States. The economic goals are also understandable: mutual support of the bloc countries, generous lending to developing economies and “preventive measures” against the global risks associated with changes in the US Federal Reserve policy. The financial resources at the first stage are far from as much as those of the IMF or the World Bank, but the first step is the hardest. As for the strategy, here it is, as they say, “I would like more detail” ...

Observed and translated by Oleg Chuvakin
- especially for topwar.ru
Ctrl Enter
Noticed oshЫbku Highlight text and press. Ctrl + Enter
We are
Standing on the Nile. The battle for water begins in AfricaBRICS: friendship against the dollar
Military Reviewin Yandex News
Military Reviewin Google News
26 comments
Information
Dear reader, to leave comments on the publication, you must sign in.