C "Batya" on the minefield 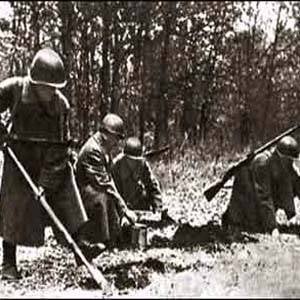 Young priest - oh. Alexander (Petin) - arrived in the spring of 1937, after 5 years of hard labor in Kolyma, in the city of Penza. There he served for several years as a priest. At the beginning of the war he was called to the construction battalion and, as Archpriest Alexander Kravchenko writes: “... he was assigned to the battalion that built the airfield, the runway ...


But the Germans were advancing so swiftly - nothing was needed. An order was received: “We are moving away! Enemies will be here tomorrow! ” Next is the story of an air raid on their cart with horses, caught in a forest glade. The Messerschmitt-109 pilot, when he used up the bombs, literally began to hunt for soldiers, shooting them from a low-flying flight - “... Father Alexander, when he was fleeing death from an airplane, fell flat on the ground, squeezing into it during the first machine gun fire. He fled from death from heaven, and she was waiting in the earth. Our retreating troops probably mined places for fear of a breakthrough tanks, and anti-personnel mines were thrown.

It so happened that their airfield service battalion remained for someone's negligence almost behind the front line, in the rear of the German forces advancing along the main roads. The train, moving forward, stubbornly pulled out of the German ticks. The front cart suddenly blew up. Now, one thing remained: with homemade probes slowly move forward. But, where a man passed, a horse with a loaded cart could be blown up by a mine.

The night has come. The Germans rested at those hours. The convoy was barely moving, paving the way through a minefield in complete darkness. But here - again a bright flash of fire, a deafening roar. All stayed. This went on for several days. Cold. The first snow has gone. The road began to bring. With the first cart now no one wanted to go. A murmur threatened to go into disobedience. The convoy stopped the already slow movement.

The battalion fighters knew Father Alexander well, they respectfully called him “Batey”, despite the fact that he was relatively young. His calm confidence, a special love for others was passed on to everyone.

And here the commander called father Alexander. It turns out that the fighters said that they would go further if the "Dad" goes to the first cart or follows it. The commander, still a young man, embarrassedly explained that now neither he nor the political instructor is in possession of the situation. The officer said: “I understand that war is war and you can order, but my language does not turn, and I ask you to take into account not the voice of reason, but feelings. Of course, it is cruel, it seems to be a hostage, but now only faith in a priest can lead people. The fighters have the confidence that we will not perish with the “Batey”. You know, ”the commander went on,“ I myself share this confidence. ”

Without hesitation, Father Alexander went with the first cart. It was not a throw at the fire-breathing embrasure. But here was the same dedication in which he was strengthened by the faith of the people. The fighters cheered up and cheered up. "Daddy" went tirelessly. Father Alexander thought that not everyone gets such wonderful moments in life when his faith gains visible confirmation. All the fears were left behind, on that “clearing of death”, where his life was not interrupted from the machine-gun fire from the plane. Apparently, the Lord judged to continue to bear testimony about him among the people. Nervous tension subsided, but at times the body was filled with heaviness. That shivers, then throws into a fever. When it became completely unbearable, Father Alexander lay down on the cart.

After a journey of many kilometers, when the heaviest was left behind, the forces left the battered father. Father Alexander was burning in a severe cold. After leaving the encirclement, he was taken to the nearest hospital, in Kimry. It turned out bilateral pneumonia.

Soon, Father Alexander was released from military service. And he remained to serve as a priest in Kimry. During his priestly ministry, he repeatedly sent food carts to hospitals for wounded soldiers. For his work during the war for the benefit of the Victory, the priest was awarded the medal "For the Victory over Germany" and "For Valiant Labor in the Great Patriotic War" and even thanks from Stalin as the Supreme Commander.

Later, Father Alexander became a monk named Nikon. Then he was consecrated bishop of Kherson and Odessa. Lord Nikon died in 1956, when the veteran of World War II was still relatively young. He was buried all of Odessa. The coffin with his body was carried in his arms from the church on French Boulevard to Odessa Assumption Cathedral. ”

Ctrl Enter
Noticed a mistake Highlight text and press. Ctrl + Enter
We are
Father toldMilitary priest father Ciprian Peresvet
104 comments
Information
Dear reader, to leave comments on the publication, you must to register.