Serbia: instead of the EU - in the Customs Union?

25 September 2013
95
Mass media note that more and more votes are being distributed in Serbia in favor of joining the country instead of the European Union into the Customs Union, as well as in the CSTO. This is supported by the Russian Party, the Doors movement and the Democratic Party of Serbia. At a recent congress of Russian-Serbian friendship, some Serb party members expressed the need to abandon the EU integration course. 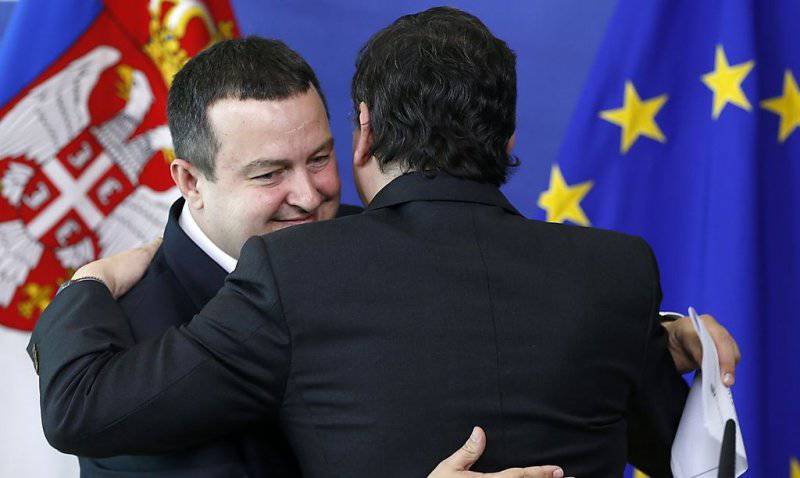 As the "Voice of Russia", with a proposal to join the CU, and then to the CSTO made several Serb parties. Slobodan Nikolic, Chairman of the “Russian Party in Serbia”, explained why his party favors cooperation with the Customs Union and why it does not “dream” of Serbia joining the EU.

“We stand for economic and, most importantly, military alliance. Three or four days ago, information appeared that Vladimir Putin said that after his visit to Serbia in December, he would offer to strengthen economic and military cooperation between our countries. ”

According to Comrade Nikolic, “the European Union is completely gone.” For this reason, “he is not interested in Serbia,” and Serbia is “not needed”. And then there's the Kosovo question. The press wrote that representatives of the EU, Nikolic said, spoke about the possibility of new ultimatums.

“We believe that we need cooperation with Russia, that the Russian market is interesting for us and that the West needs us only as a cheap labor force. Serbia is sometimes called “small Russia”, because 70 percent of Serb residents are good to Russians and want a union with Russia. ”

At the same time, it is known that Serbia has signed an association agreement with the European Union. However, Slobodan Nikolic believes, since then there have been changes for the worse.

“... We were promised investments, but they are not coming. The country's debt is already about 29 billion euros. European politicians only want to use our natural resources. The Serbian economy remains low. We consider it as a party to push forward the idea of ​​the Eurasian Union as the salvation of the Serbian people. Russia is a big country, and it stands firmly on its feet. ”

Nikolic also explained that, in addition to his party, Kostunica’s party and the Doors movement are in favor of integration with the Russian Federation.

In the channel reportage "RT" It is noted, among other things, that Serbia and Montenegro today has a free trade zone with the Customs Union. At the congress of Russian-Serbian friendship, Serbian political analysts said that Serbia is the only country that has a very fine policy of avoiding integration with the West, formally trying to join the EU.

It is noted that the Serbian economy depends on large foreign investments.

As for the Serbian government, it unequivocally supports the accession of Serbia to the EU - and not at all formally. History This one has famous roots.

V. Kostunica, head of the Democratic Party of Serbia, negatively evaluated the agreement between Belgrade and Pristina signed in April of 2013. His words are quoted IA "REX", referring to the Serbian Beta news agency: The EU. This power is the killer of the state because it destroyed the Serbian state institutions in Kosovo. ”

According to Kostunica, neither NATO aggression, nor Western states could bring the Serbs as much evil as the Serbian authorities cause their own people today. Having ascertained 19 on April that Vucic and Dacic in Brussels "came out against Serbia and their people," V. Kostunica called for "to begin by peaceful means to resist open and shameless violence against Serbia."

You should know that the initialing of the agreement in April was necessary for Belgrade precisely for the subsequent accession of the country to the EU. The Serbian leadership for some reason stubbornly believes that in a country, should it be in the “friendly” ranks of the European Union, both loans, financial assistance, and foreign investments will immediately collapse. And thanks to all this, something like a Serbian economic miracle will happen. Very strange confidence!

For the authorities of Serbia, neither Greece, nor Cyprus, nor Italy with Spain are not examples of what the “single currency” can do with the country and the general crisis, in the full sense of the word, is limitless. The absurd government belief in the healing economic power of the EU pushes the Serbs, including Kosovo, to the idea that the matter is unclean.

“Our political elite has grown together with the Brussels and Washington establishment,” quotes Olga Churakova ("Century") the words of the Belgrade political scientist and publicist Slobodan Antonych. - It does not allow itself to even think about some kind of alternative. Any serious state, when it comes to important things, develops the so-called "Plan B". And ours have only one thing in mind - the European Union or death. ”

The aforementioned Serbian political analyst explains: “It is regrettable that public opinion in Serbia forms foreign capital. And the fact that we are so corrupt that we do not even notice it. ” He hints at the fact that the owners of the main media in Serbia are large Western media companies, and the most influential NGOs are financed from foreign funds.

At the end of June 2013, on "BBC" A photo appeared with a caption: “The EU is ready to embrace Serbia. Serbian Prime Minister Ivica Dacic (face) and European Commission President Jose Manuel Barroso (back). ” The text of the relevant note refers to the fact that the leaders of the EU countries decided in the coming months to begin negotiations with Serbia, whose application for EU membership was laid on cloth due to Kosovo disputes. (After the April agreements, let us add, from which the West was so happy, the disputes at the official level quickly disappear).

The outcome of the June EU summit in Brussels suggests that the plan for negotiations with Serbia will be approved by the European Council by January 2014. This was stated by the chairman of the European Council, Herman Van Rompuy. It is clear that the European Union is immediately ready to begin negotiations on Euro-Association with Kosovo. The status of an associate member will give the edge privileges in relations with the EU and will be a step towards full membership in the European Union. (The EU bureaucracy already calls Kosovo a “country”).

The process of preparing Serbia for negotiations is very active.

13 September 2013 Lithuanian Foreign Minister Linas Linkiavicius met in Vilnius with Serbia’s main negotiator for accession to the European Union, Tanya Mishevich, reports IA "REGNUM" with reference to the press service of the Ministry of Foreign Affairs of Lithuania.

Linkyavicius noted that during its presidency of the EU Council, Lithuania will seek to ensure that Serbia is properly prepared for EU accession negotiations.

Misevich, in her turn, informed Linkevicius about Serbia’s preparations for the negotiations. She told that negotiating groups are being formed. According to her, progress in the dialogue between Belgrade and Pristina, in reforms in the field of the rule of law, in the fight against corruption and other areas is enough to start negotiations.

Negotiations are expected to start even before the end of 2013.

Mr. Linkiavicius welcomed the agreement reached between Belgrade and Pristina on energy and telecommunications on September 8. The Minister added that it is necessary to ensure the further implementation of all agreements. The achieved results, according to Lynkevicius, allow us to hope that Serbia and Kosovo will successfully continue the implementation of the agreements. A positive assessment of the achievements is important for the start of Serbia’s EU accession negotiations.

Thus, the luring of Serbia into the EU has long been the Western gingerbread with which the so-called Kosovo issue (representing a whip) was resolved in April 2013.

Well, what about the opinion of the people, you ask?

According to the latest polls of various organizations, Serbia’s accession to the EU is supported by approximately half of the population - from 42% to 53%. Many Serbs are counting on the emergence of new jobs and the revival of the economy through the infusion of European money and downright magical changes in the Serbian cons of the pros. Neither Cyprus, nor Greece, nor other crisis states of Europe for some reason are taken into account. Probably, people want to believe in the best, and the desire for change and reform in power is alive just as the reformist itch among other Russian ministers does not subside. And if you look through, read news about negotiations with the EU and about the policy of the current Serbian government, it will become clear: everything speaks about the consistent rapprochement of Belgrade with Brussels.