Will Ukraine and Russia be able to agree on the delimitation of maritime borders? 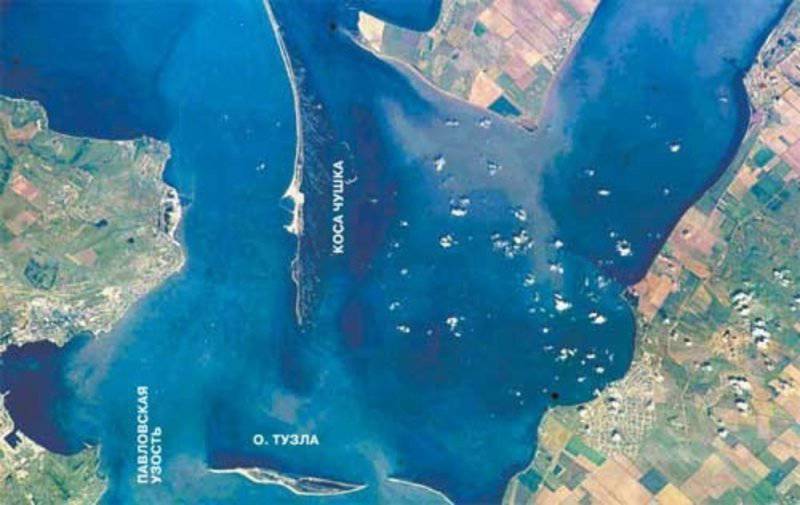 After the collapse of the Soviet Union, the two newly created states - Ukraine and Russia - faced a difficult problem: they could not divide the expanses of the Black and Azov Seas among themselves. Negotiations on this issue were held repeatedly, and with varying success. In this case, the final decision was not taken.

Bilateral negotiations between Russia and Ukraine aimed at defining the sea borders in the Black and Azov Seas and in the Kerch Strait began as early as 1996. It should be noted that after the collapse of the Soviet Union, the Ukrainian government defined its maritime boundary between the Krasnodar Territory and the island of Tuzla along the line of the scour. Thus, the shipping part of the Kerch Strait was on the side of Ukraine. Until the XIX century Tuzla, which is now an island, was a scythe. In the middle of the last century, an unsuccessful attempt was made to restore the spit. In 2003, the attempt was repeated, but at that time there already existed a territorial dispute between Ukraine and Russia, therefore dumping of the spit was stopped.

Another outbreak of activity on the problem of delimitation of maritime borders occurred in the summer of 2013, after 17 July, a tragedy occurred in the area of ​​Vorontsovka village in the Sea of ​​Azov: a boat of the Russian border guard collided with a Ukrainian launch. Killed four citizens of Ukraine. One of the main reasons for what happened, according to experts, is precisely the unsettledness of the problem of the Russian-Ukrainian sea border.

The Ministry of Foreign Affairs of Ukraine claims that this issue is at the decision stage. Moreover, progress in negotiations can be achieved very soon. In addition, as stated in the department, the problem of delimitation of maritime borders is one of the priorities in bilateral relations between states. The head of the Ukrainian Foreign Ministry, Leonid Kozhara, in particular, confirmed that Ukraine and Russia had come up for discussion of the fundamental principles of the negotiations, and the countries came up almost to the end of negotiations on the establishment of sea borders and the delimitation of the Kerch Strait. He also noted that the heads of two states approached the adoption of a final decision and approval of the proposals that had been prepared by the Russian and Ukrainian delegations. After that, the negotiations can be considered fully completed. At the same time, Kozhara did not clarify the essence of the fundamental principles, citing the fact that the negotiation process is not yet completed.

Recall that in the summer of 2012, the presidents of the two states - V. Yanukovich and V. Putin - in the framework of the negotiations gave a concrete and clear signal that it is necessary to separate the Sea of ​​Azov and the Black Sea, as well as the Kerch Strait. The presidents signed a statement in which the importance and necessity of delimiting the maritime borders and the water space in the Kerch Strait, taking into account the interests of both countries in the spirit of good neighborliness, friendship and strategic partnership, was stressed.

As part of the talks between the presidents of the two countries, it was noted that the island of Tuzla should be moved to Ukraine, and Russia would have the right of passage of ships through the waters of the Kerch Strait. At the same time, the principles of separation of surfaces were determined, according to which two thirds of the territory departed to Ukraine, by sea, by bottom and by surface.

But, as it turned out later, the parties did not succeed in finally agreeing. Therefore, to date, the working authorized groups of the two countries are working on the development and preparation of a draft agreement on the establishment of maritime boundaries. At the expert level, the relevant contacts are scheduled for this fall.

The Ministry of Foreign Affairs of Ukraine uses the fact that the issue of delimitation is very difficult, and, according to international practice, its solution requires a balanced and deliberate approach, because the length of the water borders between Russia and Ukraine is 321 kilometer.

According to a number of experts, in particular, the Ukrainian political consultant Alexander Paliy, according to the norms of international law, the separation along the administrative border was absolutely correct. Moreover, if Ukraine manages to enlist the support of the European Union, the issue of delimitation can be resolved much faster and in a more acceptable plane for Ukraine.

At the same time, according to expert Grigory Trofimchuk, representatives of the two states need to quickly resolve the issue of dividing sea borders. Otherwise, the dispute may go international and lead to the intervention of a third party.

He also notes that negotiations on this issue between the two countries are not the first year. Ukraine is confident that the maritime state border should be determined by the administrative border that was established between the Ukrainian and Russian republics of the USSR. In Russia, they are sure that the borders between the states have not been established in inland waters, and there are no official documents on this issue.

Indeed, Trofimchuk notes, there really was no such documentation, but during the existence of the USSR no one really paid attention to this, because no one could assume that the Union would disintegrate. Therefore, only territorial boundaries existed between the republics by land.

As for the agreement signed by the heads of state last year, the expert is sure that one serious aspect prevents the completion of the resolution of the delimitation problem: state representatives emphasize historical facts, with each state citing its facts and evidence. But in order to solve problems, it is necessary to look at the problem not through the eyes of historians, but through the eyes of contemporaries. In addition to the historical aspect, the problem of the division of maritime borders is also aggravated by the question of the presence of the Russian Black Sea fleet in the Crimea, since no definite decision was actually taken there either. The Ukrainian side connects the problem of modernization of the Russian fleet with the problem of the division of the Azov-Kerch water area.

That is why, the expert is sure, the problem must be solved quickly, otherwise there will always be the danger of various provocations (the same one that occurred in July of this year), as well as the intervention of the European Union and the United States of America. In this case, Trofimchuk notes that there are no special conditions for solving the problem of delimitation. To be fair, it is necessary to divide the waters strictly in the middle. In extreme cases, no party can find any arguments against such a decision. At the same time, it will be possible to find a temporary solution and make full use of this water area.

If this is not done, then Russia and Ukraine, according to the expert, will enter a state of serious confrontation, which is fraught with political consequences ...

Ctrl Enter
Noticed oshЫbku Highlight text and press. Ctrl + Enter
We are
Situational analysis of the death of the MH17 flight (Malaysian Boeing 777), made on the basis of engineering analysis from 15.08.2014The state and prospects of development of the naval forces of Ukraine (2013)
Military Reviewin Yandex News
Military Reviewin Google News
129 comments
Information
Dear reader, to leave comments on the publication, you must to register.