“The strategic task is not just to keep production, but to make it efficient and competitive” 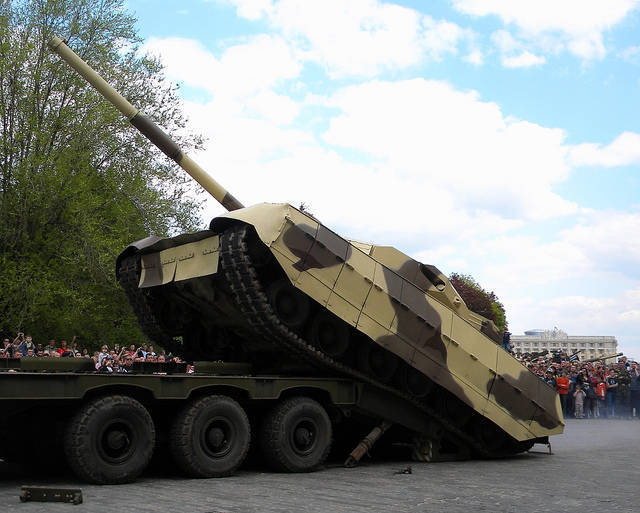 “Our order book is now eight times our current capabilities. Paradox! The whole world is chasing after work, and we are forced to transfer and “preserve” orders, the fulfillment of which is expected from us today. It is necessary to urgently restructure, to switch to modern production technologies, providing both the production of equipment that is already known in the world and the one that is just preparing to appear in our advertising brochures soon, ”- so in June of this year he stated in an interview for our magazine Defense Express, the general director of the state enterprise Zavod im. Malysheva "Vadim FEDOSOV.


And how does the Kharkov Tankograd live today? When, on the one hand, there is a test of the new “Plots” for Thailand and the further fulfillment of a difficult contract. On the other hand, there are tough plans for restructuring the enterprise and optimizing production. On the current factory realities the general director of the company “Plant them. Malysheva "Vadim FEDOSOV said this:


The process of restructuring the state enterprise “Plant named after V. Malyshev” basically corresponds to the approved strategic program. However, due to the lack of funding, the plan makes adjustments to the implementation of individual stages. This is due, for example, to the acquisition of highly productive equipment.

Important stages of restructuring are the development of design estimates and process documentation, relocation, installation and commissioning of equipment, the introduction of new technologies, the carrying out of a complex of construction and installation works, the need for new high-tech equipment. The strategic objective of the Concern and the plant management is not just to keep production, but to make it efficient and competitive. This requires significant financial resources. According to preliminary calculations, the total amount of investment required is 570 mln.

In 2013, the company has been implementing more than 800 thousand hryvnias to carry out activities under the restructuring plan. Existing funds are not enough, which hinders the process of change.

Specialists of the state enterprise “Plant named after V.Malyshev” carried out a comprehensive analysis of the property of the enterprise, identified objects that were not involved in the production process, but required maintenance costs. This equipment, buildings and structures that are not used in production. The estimated amount expected from sales and write-offs, the transfer to rent of facilities not involved in the production process, as well as from working capital and business activities of the enterprise up to 2015, will be 205,0 million UAH. In addition, according to our calculations, government support before 2015 should be 365,0mln.

The most important condition for successful restructuring is the introduction of amendments to the Law "On the Management of State Property Objects" Art. 11, p. 9, where enterprises are prohibited from selling real estate objects that are not used or planned for use in production.

To fulfill the strategic directions of work requires the acquisition of modern equipment. The cost of equipment that is planned to be purchased during 2013-2015 is over 150,0 million. hryvnia

In this case, a plan for the modernization and repair of existing equipment (primarily with CNC) is already being implemented. This will allow organizing multi-machine maintenance in labor-intensive operations, reducing the cost of pre-production by 20-25% by introducing universal or simpler equipment and significantly increasing productivity. Released qualified specialists can be used in the processing of main parts - engine block, crankshaft, etc. The approximate amount of the modernization and overhaul of equipment —30,0 mln.

In the future, it is planned to concentrate production at a single site in 42 hectares, instead of the existing 190 hectares at two sites (a decrease in 4 times).

To reduce land tax payments, it is necessary to resolve the issue of settling land relations with new balancers. For this you need to get a documentary allotment of land for objects and a state act on the land.

Most of the parcels being vacated do not have the required documentation, since many of the buildings are pre-war. For registration of technical certification need more than 5,0 mln. To resolve this issue, the Concern and the plant are seeking assistance from the regional authorities of Kharkiv and the Kharkiv region. Very important for the company will be, including the reduction of land tax on 2014.

Instead of the previously existing heat treatment sites at the 32 plant, three will remain by the end of the current year, and two sites in the 2014. At the same time, the number of such processes will increase. Only due to this, the savings in energy resources and repair costs will be about 2.5-3.5 million hryvnia per year. Similar work is being done on electroplating sites.

The same situation with motor transport. From 220 units of equipment that are more than 25 years old in operation, written off and is in the process of writing off 127 units. Basically it is “Volga” for the administration. By reducing the number of vehicles, moving the site of the motor workshop to the center of the plant and other steps, the savings will be 1,2 million hryvnia per year.

Total savings on conditionally fixed costs due to the restructuring program and energy efficiency in 2013 compared to 2012 were expected to be at least 40 million hryvnia.

Assembly of finished products (Tanks, Armored personnel carriers, artillery systems) is already concentrated in one workshop No. 130, instead of previously scattered industries. In this workshop, redevelopment was carried out, routes of technological chains were changed. The working conditions of the workshop workers have been improved - the repair of household premises has been completed, the working dining room is being renovated, the workshop is equipped with autonomous sources of hot water supply. We understand that people are the main thing in production.

Work has begun on moving to the main site of the workshops of aggregate production for the manufacture of a range of engines for armored vehicles. At present, a modern technological platform (3000 sq. M) is being prepared for the final assembly of engines, engine assemblies and input control for incoming parts.

The hull No. 750C is being prepared for mechanical production of components for these engines, it is planned to transfer the thermal and galvanic shops of the aggregate production to the main site - to the galvanic sections of the shops No. XXUMX and No. XXUMX.

Restructuring is carried out taking into account the lean manufacturing system tested in many industries. It defines 7 types of basic losses, due to the elimination of which, it is possible at a relatively minor cost to significantly improve the economy of production.

Losses due to backward technologies in casting, machining and in general - the use of outdated machinery will also be eliminated.

Optimization of the structure and production capacity will ensure at least a stable achievement of the break-even point and increase the competitiveness of products. Along with improving the balance of the enterprise, its investment attractiveness will increase. It is planned that by the year 2015 SE “Plant named after V.A. Malysheva "will be released on the volume of production of goods, goods and services, approximately - 1,5 billion hryvnia (fact 2012g. - 245 million)

The goal is to ensure the development of new products, the production technology of which corresponds to the capabilities of the enterprise and does not require large investments in the preparation of production and the development of sales markets. But the main focus remains the release of new and modernized armored vehicles for their own army and for export.