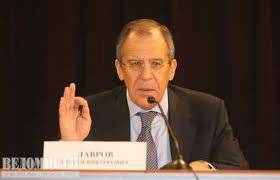 Rumors about the possible resignation of Foreign Minister Sergei Lavrov seem completely ridiculous - if they did not reflect the struggle that accompanies Russia's return to the most important position in the geopolitical arena.


On Wednesday evening, an orientalist, a blogger and the author of the newspaper VIEW Anatoly El-Murid published in his blog a message stating that a decree was being prepared in the Kremlin on the release of Sergei Lavrov from his duties as foreign minister. According to the analyst, the attack on the minister comes from the government apparatus - he is charged with an excessively harsh position during the Syrian crisis and the complication of relations with the United States. At the same time, the draft decree allegedly has not yet been endorsed by most of the staff of the presidential administration in Russia.

At first glance, this information is like an absolute fiction - how can you even imagine that President Putin dismissed the minister, who was also the most popular (along with Shoigu) member of the government, so sensibly and professionally pursuing his own foreign policy? Yes, and at the peak of the achievements of Lavrov, after the conclusion of an agreement on Syria? All this would have been the case if not for one circumstance: the sources of El Muride are not among those who sow panic from scratch. In addition, the request to voice this information came from people genuinely concerned about the situation of Lavrov, and not at all from his opponents (the names of people involved in the preparation of the decree are also known to El Murid). If so, this means that some serious game (including hardware) against the head of the Ministry of Foreign Affairs is underway, now it has reached a potentially dangerous stage for him.

Rumors about the possible resignation of Sergei Lavrov already went in the spring of 2011, then this was due to the fact that the Foreign Minister was against the position of President Medvedev on Libya. The head of state, hoping for the promises of the Americans "not to take power actions without consulting with Russia," ordered our representative in the UN Security Council to abstain in voting for the anti-Libyan resolution, which opened the way to Western aggression against the Jamahiriya. However, soon everyone was convinced how short-sighted it was to trust a “citizen to a wolf”, and unofficial information about the disagreement with “abstinence in the UN” only strengthened the authority of the head of the foreign ministry in Russia and the rest of the world.

It is difficult to assess how serious the threat of Lavrov’s resignation was then - it’s almost incredible that Vladimir Putin would suddenly agree to dismiss the minister whose position he shared. Moreover, voting on Libya led to a single public dive between Putin and Medvedev - when the then president declared that it was unacceptable to use expressions like “crusades”, adding that some clap their wings on the hull. This was a response to Putin’s statement a few hours earlier, calling the UN resolution “inadequate and flawed”, and the actions of the West “crusade”. These disagreements, or rather, the serious geopolitical mistake of the Kremlin, actually became the last straw that finally convinced Vladimir Putin of the need to again run for president.

Now the situation seems to be completely different - Russia's firm position on Syria is undoubtedly the result of the joint work of the president and the foreign ministry, is in the national interest and cannot cause any tension between the leaders. It is clear that in the Russian leadership, more precisely, in the liberal wing of power, there are quite a few supporters of improving relations with the United States by pursuing a cautious policy and not disrupting globalizers - in the hope that this will lead to a flow of investments and innovations. It is impossible to publicly state this position, either because of its extreme unpopularity in society, or simply because there are no clear arguments in its favor. But you can try using hardware moves to weaken the influence of people conducting the Putin course. It is clear that in the operation with Lavrov — if she is really preparing — not the arguments that are really driven by her initiators are used at all. It is not a question of the excessive hardness of Lavrov (that is, Putin), but of his merits and successes. It is likely that it is generally proposed to mark the head of the Foreign Ministry with an increase - for example, to make Lavrov a deputy prime minister. It is clear that all these tricks are primitive, but ...

It’s one thing if Lavrov gets vice premiership in addition to his post as minister (by the way, Yury Andropov did, who appointed the head of the foreign ministry Andrei Gromyko also first deputy prime minister), and it’s quite another if he becomes just a vice, in charge of foreign policy (a similar option applied to the same Gromyko Mikhail Gorbachev, who made him in 1985 a formal head of state - Chairman of the Presidium of the Supreme Soviet of the USSR, but actually removed from foreign policy). In this case, supporters of the “soft course” have the opportunity to hold their own person in the chair of the foreign minister.

One of Lavrov’s strengths, especially important nowadays, is his excellent knowledge of the habits and techniques of Americans on the world stage as a whole, and not just in the sphere of bilateral relations, acquired during 17 years of work at the UN, where he dealt with in the Security Council times with the US global strategy. That is what annoys Washington - Lavrov knows their kitchen almost from the inside.

Although Lavrov’s resignation is impossible, rumors about her are very symptomatic. More recently, in June, the head of Russian Railways, Vladimir Yakunin, another close ally, and also personal comrade Vladimir Putin, was also “removed” from his post. Like now, it was done at the most seemingly inappropriate moment - on the eve of the President’s speech at the St. Petersburg Economic Forum, where he announced the launch of two major railway projects: the expansion of BAM and Transsib, the construction of the Moscow-Kazan expressway. It was the opposition to the global infrastructure plans (and it is clear that not just Yakuninsky, but also Putin's) was the main reason for the attack on the head of Russian Railways.

Then even the major media outlets believed in the fake order of the government about the resignation of Yakunin (although, according to the law, the prime minister could not remove the head of the Russian Railways) until after half an hour no refutation was received.

It is no secret that Vladimir Yakunin, who along with Igor Sechin is one of the key figures in managing state assets in the economy and opposing plans for privatizing state property, has serious disagreements with the liberal block of the Cabinet of Ministers on Russia's development strategy. “The global financial and economic crisis convincingly demonstrated the impossibility of going on the path of sustainable development while relying on the ideas of liberal capitalism,” Yakunin, well known for his anti-globalization and statist views, could well say that, but these specific words are taken from Sergei Lavrov’s speech.

Liberals believe that Russia should be smaller than the state, including in the economy. A strong state, and therefore a strong government, in their opinion, only hinder the development of business and the economy as a whole. Better to let the "free hand of the market." Considering that the largest financial and oligarchic structures, which have long been global, are much more powerful by an order of magnitude than the Russian ones (and even more so the banks), it is clear where this hand will come from.

So, a strong state also prevents external forces - why should globalizers independently determine the rules of the game at home Russian power? After all, a strong Russia inevitably begins to build economic and political alliances around itself, penetrate the markets of various regions (including armaments) and support the desire of states and peoples for independence from Latin America to Africa. The construction of the railway in Libya and the purchase of the Serbian railways is a phenomenon of the same order as the SCO summit or the Lavrov talks in Geneva.

So claims to Lavrov and Yakunin have the same reason and the same source. And not to the heads of the Ministry of Foreign Affairs and Russian Railways, these claims, but to the president and his increasingly clearer patriotic course.

Ctrl Enter
Noticed oshЫbku Highlight text and press. Ctrl + Enter
We are
Interview of V. Putin to Channel One and the Associated Press AgencyWho will be the next victim of destabilization in the Middle East?
56 comments
Information
Dear reader, to leave comments on the publication, you must to register.