21 September 2013
287
The past week was the week of the anniversary (10-th in a row) meeting of the international discussion club "Valdai". Initially, the discussion club was created as a platform for meetings of politicians, political scientists, philosophers and sociologists specializing in the study (and, by the way, conduct) of both foreign and domestic policies of Russia. The appearance of “Valdai” in 2004 was assessed as Russia's attempt to attract public interest (not only Russian, but also foreign) to the Russian political system, and at the same time improve Russia's image at the international level. 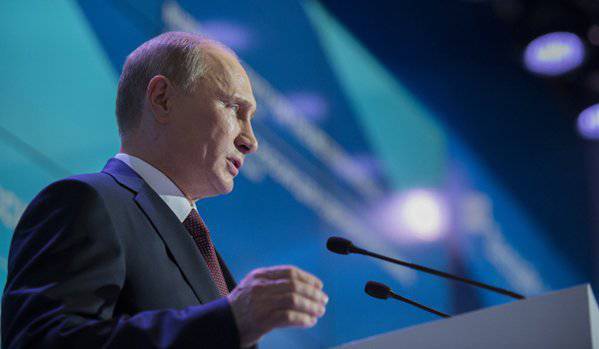 Over the years of its existence, Valdai has become a unique international platform where representatives of various political, philosophical and religious views on domestic Russian events, as well as events in the world that have a certain impact on Russia, have the opportunity to express their point of view. Not only ardent supporters of the existing government, but also its critics, no less ardent, began to gather in the club. Even with just a quick glance around the hall where delegates gathered to discuss a particular topic, it can be concluded that the diverse audience today is represented in the Valdai Club: from current politicians of the federal scale to their political opponents from all sides .

Dmitry Saymes, an American political scientist well-known in Russia, said that such a discussion platform as “Valdai” in terms of its representativeness, openness and a set of discussed issues simply has no analogues in the world. There is nothing like it even in those countries that, in the mode of repeated repetition and complacency, call themselves "developed democracies."

The anniversary "Valdai" was marked by a very nontrivial speech on it by the Russian president. Its non-trivial nature was that, in a fairly short period of time, Vladimir Putin was able to tell the audience about his understanding of not only the development of the domestic political system in Russia, but also conveyed to them, let's say, his feelings about the global world order. Putin’s speech at the site of the Valdai Discussion Club in many ways reminded him of his six-year-old speech, which political analysts called the Munich speech. Recall that in February 2007 of the year (therefore, even before the “heyday” of Arab and other “springs”) Putin severely criticized the desire of certain countries (of course, primarily the United States) to finally make the world unipolar. Then Putin condemned the policy of expanding NATO to the east, criticized the rich countries for "preserving" the backwardness of the third world countries, and recalled that there is no country in the world that could take legal functions as a world police officer.

Much of this sounded in the Valdai Club. Putin spoke in detail about how he decided to publish his article in the American newspaper The New York Times. According to him, he decided to use overseas authoritative publication to allow Americans to hear an alternative view not only about what is happening in Syria today, but also that there are no exceptional nations in the world, that all nations are unique, but at the same time time are equal. He said that he literally had to manually write down the last paragraph in his article, after he met with the recent speech of Barack Obama to the Americans.

But it was precisely in this speech of the American president that the very notes were contained which made it possible to compare his speech with something very reminiscent of the propaganda of national exclusiveness, which at one time was the leitmotif of the Nazi policy.

Speech on nationalities and their role in the development of the world community also came when Putin touched on ethnic issues of the Russian Federation. The head of state once again emphasized that the very fact of challenging the Russian multinationality can be disastrous for Russia.

By questioning our multinationality, starting to exploit the theme of Russian, Tatar, Caucasian, Siberian and any other nationalism and separatism, we get in the way of our genetic code, in fact, we begin to destroy ourselves.

Strange, but today this combination for some reason has become almost abusive. At the same time, people who are hampered by the phrase “Russian people” for some reason forget that during the times of, let's say, traditional Russia, the phrase “Russian people” did not cause absolutely no resentment even among those peoples who were with the Russian, let's say , in a very, very, very close relationship. Russians were called both Russians and all those peoples who inhabited the country. It is noteworthy that today, as they say, foreigners do not bother about this: if a person is from Russia or from any other country of the former USSR, then he is Russian, even if he is an Avar, even a Kazakh, even a Georgian, or even a Volga German ... themselves "screwed" on the Russians, Ukrainians and others, saying that everything else - from the evil one, bad and politically incorrect.

In his Valdai speech, Vladimir Putin emphasized that every nation is unique, but all nations are equal. One people cannot be better than another or worse, more correct or more wrong. Talking about ethnic exclusivity is what is from the evil one, that’s what you really need to fight within the law.

Putin noted that he would like to use the positive experience of the Soviet Union in maintaining even the smallest peoples of the country:

I learned with interest that in Soviet times so attentive to this were the attitude of the small nations. Almost every small nation had its own print edition, supported languages, national literature. By the way, much of what was done in this sense before, we need to return and adopt.

Indeed, a country in which there was a more than abstract notion of “Soviet people”, however, managed not only to preserve the national identity of each of the individual ethnoses belonging to its composition, but also to develop these ethnic groups. The presence of national schools, the teaching of the native language, the study of the culture of a particular region — all this did not fool anyone, unlike today. There were, of course, individuals, but, as stated in one famous film: the overwhelming minority.

The reason is that a clear supranational policy was also carried out in the country: you are Russian, Chechen, Buryat or Estonian, you learn your language, comprehend the culture of your national community, but you also have to remember that you are part of a single state which positions itself as a conglomeration of peoples, having a single common name, common goals, a common pivot of development.

After the collapse of the USSR, the national fragmentation led to the fact that this core still cannot be restored. In this connection, the creation of a new national idea also stalled. By the way, Putin did not forget to remind about this either.

He stressed that today Russia is trying to impose options on an "ideal society" from the outside, but for our country, for our society, artificial planting is simply unacceptable. “Positive” of same-sex marriage, violent “democracy”, propaganda of pedophilia and permissiveness - all this is alien not only to Russia, but to any country in which people with common sense remain. This is far from freedom, it is something close to global sodomy, which they are trying to pass off as freedom.

One can agree and disagree with Putin’s theses, this is everyone’s business. Obviously, fans of the western version of democracy will shout that Putin is dragging Russia into the dark past, that people like him prevented Peter I from cutting the window to Europe at the time ... Nationalists will announce that the president has taken the path of unifying nations. And ardent fans of the president will announce that his words are simply brilliant and they need to be carved out of granite. Some will water the others from the cesspool hose, they will respond with the same coin ...

The debate about the role of the politician and his speeches for the development of society is, in fact, good. The main thing is that disputes do not turn into feuds, after all, feuds generally put a fat cross on all good undertakings and even stop the impulses for such undertakings. If there is a place for an open discussion, for an exchange of views, without fists, spitting and mutual steps, then this may say that we are gradually growing out of short ripped denim pants, presented to us by the “partners” after the collapse of the USSR. Definitely growing up! Putin’s words on Valdai confirm that power is growing. It’s far from perfect, of course, as Grandpa McCain told us the other day, in his article, but a) we understand it perfectly well, b) there is no ideal power at all by definition, c) power in any case looks at the people who are near with her, behind her back. I would like to believe that the actions of our government will increasingly go with an eye to, sorry for the hackneyed term, popular opinion. At least, Putin’s Valdai speech instills such optimism.

Ctrl Enter
Noticed oshЫbku Highlight text and press. Ctrl + Enter
We are
Bilderberg club and its interests in UkraineResults of the week. “Russians, surrender, we are a horde!” - “And us - army!”
Military Reviewin Yandex News
Military Reviewin Google News
287 comments
Information
Dear reader, to leave comments on the publication, you must sign in.