The hunter-scout Vasily Timofeevich Ryabov was born in 1871, he grew up in the village of Ivanovka, Penza district of the Penza province. Almost a century and a half has passed, but his memory has remained for centuries. 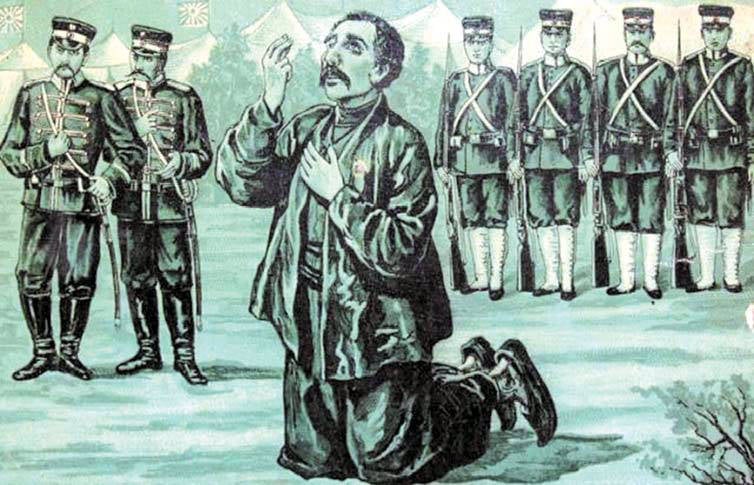 The shooting of a military intelligence officer Vasily Ryabov. Artist A. Vavilin

After his dismissal from active military service in the reserve Ryabov settled in the nearby village of Lebedevka. Brave, smart was a man, he loved the theater, his wife, although he was beating to the hops. And I could use someone else's good. There was such a thing ... But he redeemed all sins with his feat.

From the beginning of the war, Ryabov was enlisted as a volunteer in the 284-th Chembarsky infantry regiment, in whose ranks he took part in hostilities on the territory of Manchuria. He served in the hunting team, as they called the volunteer intelligence officers. With the help of gestures, facial expressions, and gait, he could copy the Chinese, and this often made fun of his comrades.

After the battle at Liaoyan, in the autumn of 1904, information about the disposition of enemy units became extremely necessary for the Russian command. 14 (27) September 1904 of the year Vasily Ryabov volunteered to go on reconnaissance, disguised as a Chinese peasant and tied a braid to his head.

The Japanese did not solve the Russian intelligence officer, and Ryabov was already returning to his. However, a passing officer ordered him to water the horse. Ryabov, who did not know Chinese, did not understand, probably, the meaning of the order or did not exactly follow it. Then an annoyed Japanese tugged at his braid, which ... was torn off. So it all opened. 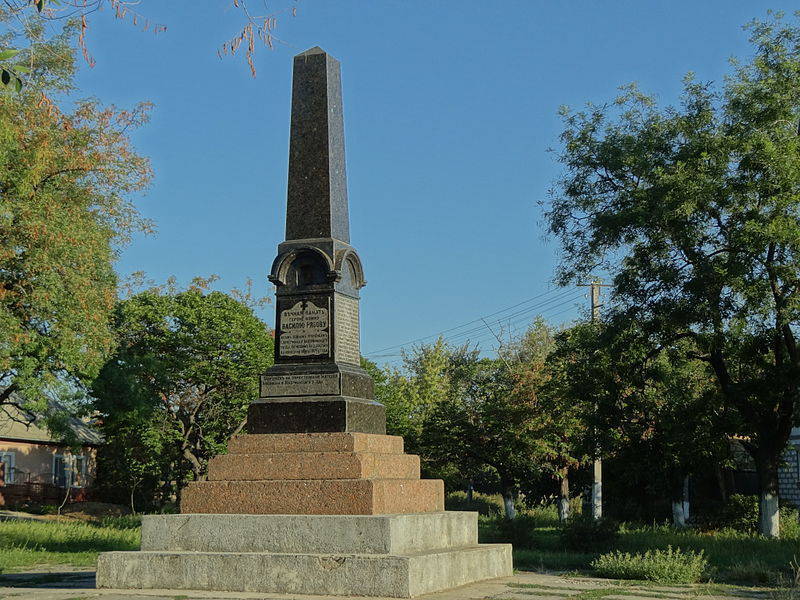 A military intelligence officer was tried as a spy and sentenced to death. Vasily Timofeevich took his death proudly, with the name of the Motherland on his lips, remaining true to the military oath. The courage of the Russian soldier made such a deep impression on the enemies that they began to consider him a "Russian samurai."

A day later, the 1-th Orenburg Cossack regiment stumbled upon a letter thrown to a lone oak in neutral territory. It read:
“Reserve soldier Vasily Ryabov, 33 of the year, from the hunting team of the 284 Infantry Regiment of Chembarsky, a native of Penza province, Penza district, Lebedyivka village, dressed like a Chinese peasant, 17 of September 1904 of the year was caught by our soldiers within the front line. According to his oral testimony, it turned out that he, according to a wish expressed by him, was sent to us for reconnaissance about the location and actions of our army and made his way into our September 14 chain through Yantai, in the south-east direction. After consideration of the case in the established order Ryabov was sentenced to death. The last was made 17 September rifle shot.

Bringing this event to the attention of the Russian army, our army cannot but express our sincere wishes to a respected army, so that the latter would bring up more such beautiful, deserving full respect of the soldiers, like the so-called Ryabov. Sympathy for this truly brave, full of his duty, an exemplary soldier reached the highest limit.

Attached to the letter was a note in Chinese, which warned the locals against its destruction and the scheme of the area where the execution took place, and the remains of the hero rested.

Emperor Nicholas II learned about Penza intelligence officer and established a committee to perpetuate the memory of the hero by the highest order. Donations began to flow in from all over Russia. Pupils of gymnasiums sent from four to twenty-five kopecks. As a financial aid to his family, 7 thousand rubles and 2569 rubles for building a school were collected by subscription.

At the direction of the Sovereign, the family of Ryabov was given a thousand rubles, and his children were placed in state educational institutions.

The reconnaissance warrior was forever enlisted in the lists of the 284-th Chembarsky regiment, as stated in the order: “In edification to posterity”. After merging it with the 216-Insarsky regiment - in the list of 5-th company of the 2-th battalion.

The newspaper "Penza Provincial Gazette" 15 of October 1904 of the year wrote: "In the village of Lebedevka a Zemskaya school, in which he once studied Ryabov, is located right in the impossible building. Should:

2) Open a good reading library at the new school in memory of Ryabov.

3) Break a decent kindergarten in college and put up an inexpensive monument in it ... ”

A committee was set up to organize the school-monument. Donations came from all over the country. The grand opening took place on 9 May 1909. The gable of the building was decorated with a sign: “Primary school in memory of the hero Vasily Ryabov. Killed 14 September 1904 of the Year for Faith, King and Fatherland. ”

September 1 The 1909 of the Lebedev Zemstvo School was organized by a funny company, which consisted of 25 students. Her goal was to train the younger generation in military gymnastics and the military system.

The commander of the amusing company was commanded by a non-commissioned officer of the 177 th Izborsk regiment, and it was maintained at the expense of the Lebedev rural society.

October 6 1909, the ashes of a soldier Ryabov were transported from Manchuria and buried with military honors in the village of Lebedevka near a school built in memory of Vasily Timofeevich.

The train with the hero’s remains at all stations was met by crowds of people with icons and flowers, starting from Chita. In Penza, the coffin was met by a military band with a half-man from the local garrison, priests, and many civilians.

14 May 1912, in the days of the celebration of the 100 anniversary of the accession of Bessarabia to the Russian Empire, the grand opening of the monument to the intelligence officer took place. On the same days, Jewish Street (now Kirov) was renamed V. Ryabov Street.

In 1912, in the city of Akkerman (now Belgorod-Dniester, Odessa region of Ukraine), an eight-meter obelisk was erected by donations from citizens.

This is how a contemporary described this day: “In the morning the city took on a festive look. Boulevard, public institutions and private houses are colored with flags. Already from 7 in the morning, the streets began to be filled with people who had flowed out of the suburbs of Shabo, Turlaki and Daddy.

At 10, a cathedral prayer service was served and at 11 hours, a procession from the cathedral moved to the site of the monument.

At this time, pupils and pupils of local educational institutions accompanied by the heads and teachers of these institutions began to flock to the site where the monument was erected.

The following places arrived here and occupied the places established according to the ceremony: gymnasiums for women and men, teacher’s seminary, men’s 5-class city school with their own orchestra and all local men’s and women’s public schools.

Pupils of female gymnasium with flowers in their hands.

Here also awaiting the arrival of the procession were militia warriors.

At 11 hours the chimes of bells rang out and soon a procession appeared ... "

Before the eyes of those present, there appeared an elegant obelisk of black marble with an icon, in front of which an inextinguishable lamp was lit and under it was taken into the text: years. "

Even lower: “Constructed with the donations of the residents of the city of Akkerman and Akkermansky Departure, the Main Chamber of the Russian People's Union of the Archangel Michael and the city of Yekaterinoslav”.

“At the end of the consecration of the monument and numerous solemn speeches, a ceremonial passage of troops past the monument took place,” said the same eyewitness. - The command of the parade was received by the military commander, Lieutenant Colonel Alexander Fedorovich Morozovich, himself a member of the Russian-Japanese war, the first to pass by the monument. He was followed by deputies from the district - a colonel and retired officers in military and civilian uniform, a company of George Knight and the wounded, a battalion of militia warriors, military command teams, guards, Bayramchansk merry, female and male educational institutions, and female educational institutions were included in the fence the monument and covered flowers with its foot ”. 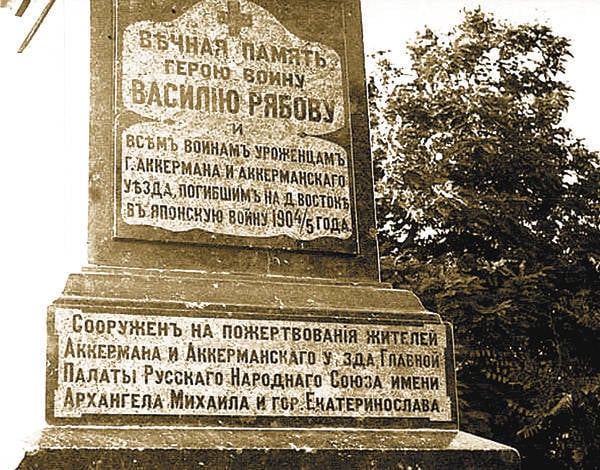 In 1971, the 100 anniversary of the birth of Vasily Ryabov was celebrated. His relatives came to the celebrations in Belgorod-Dnestrovsky. Someone from the party chiefs ordered, just in case, to remove from the monument the references to the Black Hundreds. It is said that the director of the local history museum itself chisels the seditious inscription in which the People’s Union named after Michael the Archangel was mentioned.

MEMORY OF THE GROUND

Back in the years of the First World War about the heroism of a soldier, several propaganda films were shot. The Skobelev Committee and the “Gomon” Society released on the screen the “military story” - “The feat of the private Vasily Ryabov” (director A. I. Ivanov-Guy). Its premiere took place on November 18 1914. A little later, a picture by A. O. Drankov “The heroic feat of Vasily Ryabov” was published.

In Soviet times, Ryabov was remembered during World War II. In 1943, the Stalin Standard Banner wrote about him. In the same year the book of the writer S. Ulybin “The feat of Vasily Ryabov” was published.

Under Khrushchev, the district authorities recommended that Ryabov’s countrymen find a “more suitable” hero. To the credit of the Lebedevites, they did not deny Vasily Timofeevich. And he was carefully tended behind the grave, even having built an obelisk with golden letters.

And in 2002, a new rural school (the old one burned down in 1929) opened a museum stories the village, one of the expositions of which is dedicated to the hero of the Russian-Japanese war.

Two years later, on October 10, 2004, in Lebedevka, they laid flowers at the reconstructed monument. The name of the hero was returned to the local school - the main, now a branch of the secondary school in the village of Voskresenovka.

It became a tradition every year, May 6, on the day of the Great Martyr George the Victorious, to serve a memorial service at the tomb of the hero in the village of Lebedevka. Pupils lay flowers to her. So in fact, a live connection of times and generations. 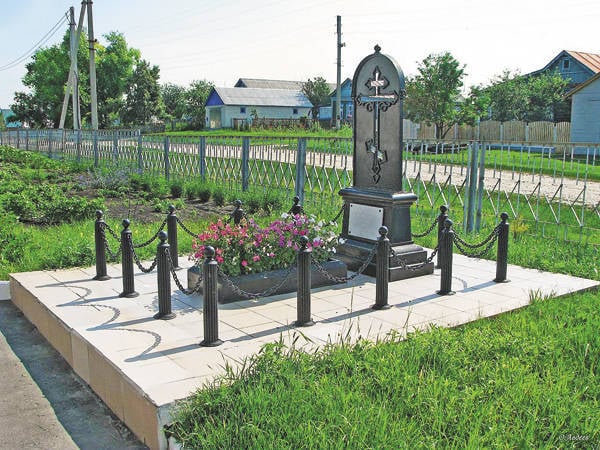 Reconstructed monument on the grave of Vasily Ryabov in the village of Lebedyovka, Penza Region

... The first Cathedral of Christ the Savior in Moscow was considered the main military cathedral in Russia. Among the numerous marble slabs on which the names of the generals and officers who died in various wars were carved, there was only one memorial plaque dedicated to ordinary soldiers. There were only seventeen names on it. And among them - the name of Vasily Timofeevich Ryabov.