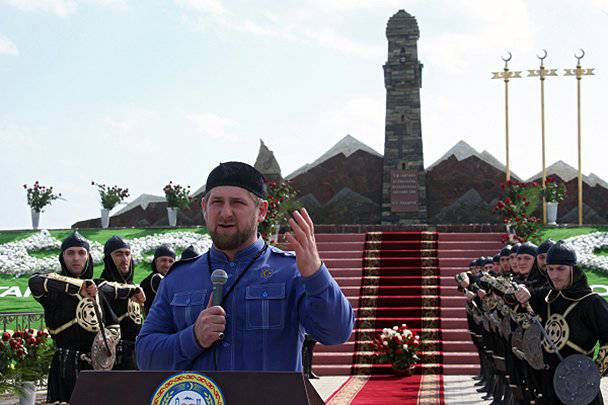 The figure of the Russian commander and statesman, the “conqueror of the Caucasus”, Alexei Petrovich Yermolov, remains his pointer, defining the attitude of a person to stories Russia. For Caucasian nationalists and liberals, Yermolov is a “strangler of freedom and executioner” who conducted ethnic cleansing. For patriots, statists - the Russian general, an excellent example of imperial policy, which is tough, but generally leads to the prosperity of the state, the suppression of savagery and progress.


Unfortunately, the current policy of Moscow towards the Caucasian regions remains strategically erroneous. It is impossible to eliminate the fundamental contradictions by economic measures. How many wolves do not feed, he still looks into the forest. Economic measures should be part of a holistic strategy to create a single “empire” (Russia has always been and will be an imperial formation), and not to replace it. The logical end of the Second Chechen War would be a large-scale administrative-territorial reform, with the complete elimination of the "titular" republics. It was also necessary to investigate all the crimes of 1990-s in the Chechen Republic, when an act of genocide of Russians occurred in it, with the almost complete liquidation of the Russian presence in Chechnya.

However, the federal authorities took a more flexible path. Like, territorial integrity is preserved, and good. The strategic consequences of this step are very sad. The Chechen Republic actually fell out of the single legal field of Russia, it began to create a state entity based on Sharia. On the one hand, one could rejoice - Kadyrov does not allow the "underground" to play pranks, he maintains order in the republic. Compared with neighboring Dagestan and Ingushetia, in Chechnya is quite stable and safe. But in strategic terms, this is Russia's defeat. Moscow signed in its weakness, giving power to the Chechen leader.

Naturally, processes are gradually taking place in the Chechen Republic (and throughout the North Caucasus) that undermine Russia's national security, lead to its dismemberment, the growth of separatist, nationalist and Wahhabi tendencies. So, a significant event happened recently in Chechnya - the head of the republic unveiled a monument to the heroines of the fight against the troops of Yermolov. Many will say - so what? What's the big deal? The bottom line is that in a single state there should be single heroes, people who hold historical memory, national myths are built. For Russia, they are Svyatoslav, Alexander Nevsky, Dmitry Donskoy, Sergiy, Ivan the Terrible, Suvorov, Kutuzov, Yermolov ... When people begin to praise people who fought against the empire in ethnic state formations, they create their own national myths, this is a failure of the center's policy. A strategic mistake that leads to a new big blood in the future.

Similar "bells" can be noted in other regions, which according to the plans of Russia's external enemies, should lead to the launch of the "Syrian (Yugoslav) scenario" in the Russian Federation. Thus, in 2012, a proposal appeared to decorate Privokzalnaya Square in the capital of Tatarstan with a monument to the founder of the Kazan Khanate, Ulu Mohammed (1405-1445), who was noted for his predatory raids on the Russian principalities. This is a very dangerous trend. It's simple. There is a common, imperial ideology, program and development goal of Russia or each national region begins to build its historical myth. What myth will be developed in the national republics is understandable. We already know examples of the Baltic, Transcaucasian, Central Asian republics, Ukraine, where "Russian (Soviet) invaders" are to blame for all troubles. Even in Byelorussia, the myth of the “Grand Duchy of Lithuania and Russian”, which prevented the Moscow Principality from living, gradually began to be built.

At present, there is no nationwide ideology in Russia, and consumption growth cannot replace it. Naturally, a holy place is never empty. Strengthens its position radical Islam. In Kazan, they recall the "great khans." In Chechnya, they talk about the 300-year-old heroic confrontation of little Chechnya and Russia, about the struggle for "freedom", etc.

The head of Chechnya, Ramzan Kadyrov, opened a memorial to the Chechens, who sacrificed themselves in battles with the Russian imperial troops during the Caucasian War. Let me remind you, in 1817 — 1864. there was a Caucasian war, during which the Russian army broke down the resistance of the mountain peoples of the northern slopes of the Main Caucasian Range, including the mountaineers of Chechnya and Dagestan. Thus, Russia has strengthened its military-strategic position, eliminated the raiding (predatory) system of the Highlanders, and pacified these territories. It is clear that war is war, rigidity and blood in war is a common thing. The main thing is that the overwhelming majority of the inhabitants of the region benefited from the establishment of peace and legality on these lands.

The monument, opened by the head of Chechnya, first appeared in the 1990 year. Then it was just a hill with several tombstones mounted on top. Since that time, it is constantly supplemented. The last but one reconstruction took place in 2009. In the summer of 2013, at the initiative of the head of the republic, a major overhaul of the structure was carried out. Memorial "Dadi-Yurt" is a composition in the form of a mountain range, in the middle of which rises the Chechen military tower. The monument is highlighted, a bridge leads to it through a channel, the territory around it is refined, lampposts are installed.

The memorial to the victims of the tragedy in the village of Dadi-Yurt in the Gudermes district, according to Chechen researchers, is located on the site where it was destroyed by the order of General A.P. Yermolov village of the same name. 14 September 1819, a detachment of Major General Vasily Sysoev consisting of six companies of the Kabardian Regiment and several hundred Cossacks approached the village of Dadi-Yurt. The reason for the punitive expedition was a raid in which Chechens hijacked a herd of horses from one of the regiments of the Caucasian line. According to General Yermolov, this aul was chosen as the target of a punitive expedition, because the residents of Dadi-Yurt were engaged in robbery and grew rich due to raids on Cossack settlements. Sysoev suggested that the residents of the settlement leave their homes and retreat beyond Sunzha. But the mountaineers refused. Russian troops attacked the village. The fight was extremely fierce. With the help of guns, they broke down the fence, then stormed the houses surrounded by stone walls. In a fierce hand-to-hand fight, the defenders of the village were killed. Among the dead were many women and children. Many were killed by the heads of families themselves in order to save them from captivity. Others committed suicide themselves, or threw knives at the soldiers. 14 captured the wounded men, one hundred forty women and children who asked for mercy. The village was completely destroyed and no longer restored. According to Chechen historians, the next day, while crossing the 46 Terek, the captured Chechen girls, taking with them Russian soldiers, rushed into the turbulent river. The legend is beautiful, but dubious. Fragile girls drown healthy fighters of the Caucasian corps, having a long war experience?

In memory of this event, on the initiative of the head of the Chechen Republic, the Day of the Chechen woman was established, it is celebrated annually on the third Sunday of September. According to the first deputy head of the Department for Relations with Religious and Public Organizations of the Administration of the Head of Chechnya, Abdulla Istamulov, the opening of the memorial cannot in any way offend the feelings of the other citizens of Russia. Istamulov told the Vzglyad newspaper that this is not an anti-Russian act or a trial of rewriting history, the Chechens have the right to perpetuate their history. “This is a confirmation of historical fact as such. If Yermolov or someone else for someone in the country is to a certain extent heroes, then for others they may not be such, ”said the political scientist. According to him, “For three hundred years Chechnya opposed the Russian Empire only because of one thing - because of freedom, and freedom for a Chechen is an opportunity to practice their religion and follow their traditions. Today we have enough of this opportunity, it is beneficial for Chechens to live in Russia and Chechens love Russia. ”

However, not everyone in Russia agrees with this point of view. Many understand or feel that this is a threat. Thus, the Bureau of “Officers of Russia” addressed President Vladimir Putin with a proposal to respond to the opening in Chechnya of a memorial to Chechen women who died while defending the village of Dadi-Yurt by installing a monument to General Yermolov in Moscow. Pavel Pyatnitsky, a member of the Presidium of the “Officers of Russia” organization in Russia, called to recall what caused the storming of the village. The actions of the Russian troops was quite a common response to a predatory raid. Robber's nest was destroyed. At that time, Russia did not stand on ceremony with enemies and robbers; humanism and tolerance, which are now destroying the national states of Europe and the white race as a whole, were not yet in vogue.

Pyatnitsky considers the initiative of the head of Chechnya doubtful. He invited the Russian president to assess the actions of Kadyrov as the head of the Chechen Republic. A representative of a public organization that unites veterans, charities, sports-patriotic and human rights associations of the federal and regional level believes that the figure of Yermolov is quite comparable in value with Stolypin, whose monument stands near the Government House in Moscow. Therefore, the monument to A. P. Yermolov should stand in a place of honor in one of the capitals of Russia.

With Pyatnitsky difficult to disagree. Alexey Petrovich Ermolov received baptism of fire during the Polish campaign under the command of Alexander Suvorov. Distinguished in the storming of Warsaw. He participated in the Persian campaign 1796, distinguished himself during the storming of Derbent. Yermolov showed himself well in the anti-French campaigns 1805 and 1806-1807, distinguished himself in the battles of Austerlitz and at Preisish-Eylau. He returned to Russia with a reputation as one of the first artillerymen of the Russian army. During the Patriotic War, 1812, Yermolov distinguished himself in the battle of Borodino, where he beat Rayevsky's battery from the enemy and was injured. Yermolov played an important role in the battle of Maloyaroslavets, which forced the French army to turn to the old, already devastated path, which led to its catastrophe. In the battle of Kulm, Yermolov led the 1 Guards Division, and after injuring General Osterman-Tolstoy, he led the entire combined detachment. Guardsmen Yermolov saved the feat of the entire Allied army, ensuring the defeat of the enemy corps. Yermolov distinguished himself in the famous “Battle of the Nations” near Leipzig. In 1816, Lieutenant-General Yermolov headed the Separate Caucasian Corps, became manager of the Caucasus and Astrakhan. The "Proconsul of the Caucasus" rules them almost sovereignly, with a clear calculation, systematically, persistently and energetically carrying out his plan for reconciling the region. Ermolov was the Caucasian governor until the beginning of the Russian-Persian war, in 1827, he was replaced by Paskevich.

The hero of World War 1812, Foreign campaigns of the Russian army and the Caucasian war, a skilled manager Yermolov - is worthy of the memory of the Russian people.

Ctrl Enter
Noticed oshЫbku Highlight text and press. Ctrl + Enter
We are
Genichesk: how many wolves do not feed, and the elephant does not care ...In Donetsk, a monument to Uncle Vasya was installed, and the ukrokrateli “congratulated” the Donbass on the Day of Metallurg
Military Reviewin Yandex News
Military Reviewin Google News
509 comments
Information
Dear reader, to leave comments on the publication, you must to register.