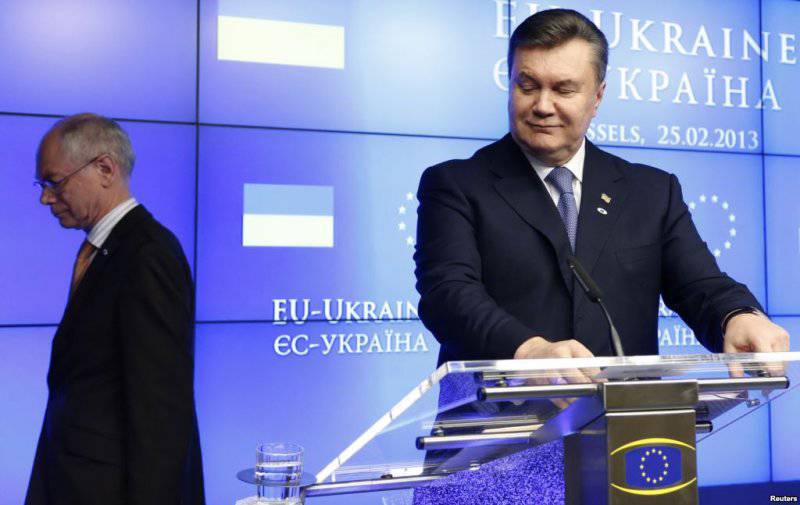 One of the agenda items of the autumn session of the European Parliament held on 9-12 in September in Strasbourg was formulated very frankly: “The pressure exerted by Russia on the Eastern Partnership countries (in the context of the upcoming Eastern Partnership Summit in Vilnius). The discussion of this issue was put on a par with the discussion about the internal political situation in Belarus.
In recent months, the European Union has been more and more energetically playing the “Ukrainian card”, and traditionally Germany and Poland are among the main players, which have played an ambiguous role, to put it mildly, in stories Of Ukraine ...

A new round of EU maneuvers around Kiev started with an emergency meeting of the Foreign Affairs Committee of the European Parliament held in late August. It was dedicated to the "aggravation" of trade relations between Ukraine and Russia. In Brussels, they even started talking about the “trade war” of Kiev and Moscow, in which the EU should unconditionally support Ukraine. The situation in the triangle “EU - Ukraine - Russia” was discussed at its meeting even by representatives of the Visegrad countries (Hungary, Poland, Slovakia, Czech Republic).

In Europe, you can now hear accusations of Moscow of anything: either in an effort to regain control of Ukraine a la the USSR, then in an intention to seize the Crimea from her, then in attempts to push the Ukrainian-speaking west and the Russian-speaking east of a single country together. At some point, the apotheosis of these accusations was the position taken by a number of politicians in Poland, the Scandinavian countries and some other EU countries on the project to build the Nord Stream gas pipeline. Instead of welcoming the opportunity not to depend in the future on energy supplies from Ukrainian transit countries, Europe started talking about “energy imperialism” of either Gazprom, Russia, or Vladimir Putin personally.

The customs and procedural problems that arose in mid-August in trade relations between Ukraine and the Russian Federation became a new and even stronger temptation for the EU. It is clear that such veterans of the anti-Russian geopolitical battles, as the chairman of the Committee on Foreign Affairs of the European Parliament German Elmar Brock and his fellow European parliamentarian Pole Jacek Saryush-Wolski could not pass by such a tasty invoice. In their joint address, they called on the EU to protect Ukraine from Russia. “By blocking imports from Ukraine, Russia is unleashing a trade war with Ukraine. The pressure is increasing to keep Ukraine from signing the Association and Free Trade Zone Agreement with the EU, ”Brock and Saryush-Wolski said.

Still, how much do the accusations of two European parliamentarians correspond to elementary common sense? Indeed, the Russian authorities 14 August temporarily tightened the customs regime on the border with Ukraine, but they did it in strict accordance with the norms of the European Union itself. Cargo is now inspected, and questionable samples are taken for additional expertise - in those cases and volumes in which this is done in EU member states.

The logic is clear. Indeed, if Ukraine actually signs the Association and Free Trade Area Agreement with the EU, Russia will no longer be able to consider it as a preferred trading partner. So, the same practice that exists in trade and economic relations between Moscow and Brussels will spread to Ukraine.

By the way, the adviser to the president of Russia Sergey Glazyev informed the European public about this in advance. According to him, we are talking about preventive measures related to the “preparation of changes in the customs administration regime, if Ukraine signs the Association Agreement with the EU”.

Today, Russia and Ukraine are bound by close economic ties, which are not developed according to the laws and regulations of the European Union. And in the event of a unilateral change in this situation by Kiev and Brussels, Moscow will be forced to revise the relevant procedures. It is clear that this will not be in the interests of Ukraine itself or of Ukrainian producers and buyers. After all, the situation is such that, although most of Ukraine’s foreign trade is in Russia, the European Union is trying to tear Ukraine away from Russia at any cost. And thus to the Ukrainian side of the socio-economic damage in the form, above all, rising unemployment and the deepening crisis.

At the moment, at least three groups of lobbyists, pushing the idea of ​​concluding an agreement with Ukraine based on their own interests, are distinguishable in the European Union.

The first group is the leading corporations of the EU member states trying to find new markets in the conditions of the financial and economic crisis. That is why the agreement on the creation of a free trade zone with the EU will be extremely disadvantageous for Ukraine: after all, it will have to open its markets to European products, but it will not automatically be admitted to the EU markets, because Ukrainian products do not formally correspond to most European quality standards.

The second group, equally interested in the implementation of the Eastern Partnership program, is the Brussels bureaucracy. The EU Commissioner for Expansion, Stefan Füle, and the EU's foreign policy emissary, Catherine Ashton, set the tone here. In 2014, elections to the European Parliament will take place, after which a new European Commission will be formed, and Ukraine’s “sticking” to the EU would be a weighty argument for the current European Missors in favor of their re-election.

The third group of lobbyists of the Eastern Partnership program is a pro-American and at the same time anti-Russian lobby in the EU countries, thanks to which, strictly speaking, this program appeared. The main actors in this lobby are Polish Foreign Minister Radoslaw Sikorski, his Swedish counterpart Carl Bildt and the aforementioned Elmar Brock.

Here it is useful to remind that the most ambitious projects of "arrangement" of the Eastern European region traditionally belonged to Polish politicians. In the period between the First and Second World Wars, the then Polish leader Józef Pilsudski was hatching the idea of ​​creating the Intermarine region - a confederative state that would unite Poland, Ukraine, Belarus, Lithuania, Latvia, Estonia, Moldova, Hungary, Romania, Yugoslavia, Czechoslovakia and stretched from the Baltics. Black Sea. Such a confederation, Pilsudski believed, should serve to revive the traditions of the Commonwealth and prevent the spread of Soviet Russia’s influence on all these countries. (Nowadays the same ideas are defended by extreme nationalists from the All-Ukrainian public association "Freedom" .) And in 60, Polish journalist Jerzy Giedroyc, who was in exile, put forward the “ULB Plan”, which provided for separation of the Ukrainian, Lithuanian and Belarusian SSR from Soviet Russia, turning their independent, anti-Russian-oriented states and creating a buffer between Poland and Russia .

Such projects, which to some extent can be considered the predecessors of the Eastern Partnership - as it appears to the anti-Russian forces in the EU - in turn had parallels in the concepts developed in Germany and Austria. They go back, in particular, to the concept of “Middle Europe” created at the beginning of the 20th century by Friedrich Naumann. The latter was understood as an aggregate of German lands, called upon to enter into “full economic dependence on Germany” and covered Austria-Hungary and significant parts of neighboring states.

The aspiration of the initiators of the Eastern Partnership program to maximize its anti-Russian vector was also reflected in a document released in Brussels on December 3 2008 in Brussels and entitled “Communication from the European Commission to the European Parliament and the European Council. Eastern Partnership. The main objective of the program was to proclaim the implementation of the decisions of the emergency session of the European Council, which required “to send a clearer signal regarding the EU commitments in connection with the conflict in Georgia and its consequences on a wider scale”. This document also consolidated the important role of the Eastern Partnership in terms of the implementation of projects for the transportation of energy resources to the EU countries without the participation of Russia, with the involvement of the countries of Central Asia.

As you can see, Ukraine’s geopolitical and energy projects are far from being of paramount importance. As for the high-profile accusations against Russia, which allegedly intends to deploy a “trade war” against Ukraine, here the ball, as they say, is just in the western half of the field. It is there, including in the space of the European Union itself, that similar wars are unfolding today.

In general, fighting for the interests of Ukraine and the universal “trade world” in words, gentlemen Brock, Saryush-Wolski and their like-minded people are once again trying to draw the European Union, the Visegrad group and other structures into questionable political games that are not related to the true European interests countries and peoples.

Ctrl Enter
Noticed oshЫbku Highlight text and press. Ctrl + Enter
We are
The failure of the goals of the Chicago summit of NATO: Germany has ceased to understand the role of the allianceNikolay Silaev, Andrei Sushentsov: Georgia after the elections and prospects for Russian-Georgian relations
201 comment
Information
Dear reader, to leave comments on the publication, you must to register.