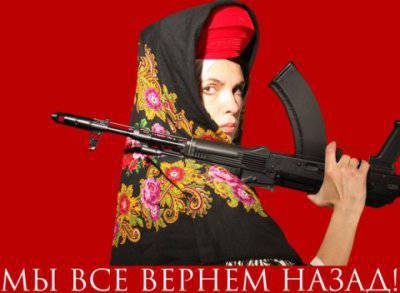 
To begin with, in 1919, the German General Hoffmann, Chief of Staff of the Eastern Front, trying to intercept the palm of the Bolsheviks, wrote: “In fact, Ukraine is the business of my hands, and not the fruit of the conscious will of the Russian people. I created Ukraine ... "
Who wants to understand in detail the phenomenon of the “Ukrainian” offspring, let's find out who the Little Russians are, and how the Bolsheviks, with sealed-up cars, made ukrov from them. So according to the census 1897 of the year, in the Poltava province there lived 94% of ethnic Little Russians and not a single Ukrainian.

"Ukrainians", especially the "orange" and "Svidomo", for some reason do not like the word "Little Russia". I do not like the word "Little Russia". Overwhelmed with fierce malice towards all "moskalskomu" these "independent supporters" absolutely do not know the true stories his people, not the origin of the words "Little Russia", "Little Russia", "Ukraine". But these words were not invented at all by the Muscovites, but by the inhabitants of Russia. This word is widely used by Bohdan Khmelnitsky in his Belotserkovny Universal in 1648 year. “Who of you loves the integrity of the homeland of your outskirts of Little Russia ...” In the letter of Zaporizhzhya Sich to Bogdan Khmelnytsky, written in January 1654, we find the following lines: the patronage of the Russian monarch, we must recognize that the best benefit to the Motherland of Little Russia is best. ”

If the term Russian was first mentioned in writing in November 1053 by Illarion of Kiev, the first Russian metropolitan, the author of the famous “Word of Law and Grace”, then the term Little Russia, Little Russia originated in 1335, when the Moscow Principality was under the Tatar yoke. Little princedom called the principality of Galicia and Volyn prince Yuri the Second. And Yuri the Second called himself "the prince of all Little Russia." “Muscovites” have no relation to the name “Little Russia”. But all the inhabitants before the beginning of the twentieth century — and Little Russia, like Big Russia — equally considered themselves Russians. “Thank God that we are Russian” - these words were said by N. Gogol. “Ukraine” was used as a geographical concept, where a part of the Russian people called Little Russians lived.

Nothing, of course, offensive in the title of "Little Russia" is not. Small - in the history of the country were called, from where people came out - his national cradle. The great ones are the center of the territorial completion of state consolidation, which have reached a particularly magnificent flourishing, wealth and power. Hence, Small Greece (Athens) and Great Greece (Hellas), Great Italy (after Rome), Small Russia (Kiev) and Great Russia (Moscow). The name "Little Russia" does not contain anything offensive or shameful for the inhabitants of southern Russia. Little Russia is the cradle of the Russian people; it is not for nothing that Kiev is “the mother of Russian cities”, from here “the Russian Land went to be”. The name “Little Russian,” if it is possible to speak of preference at all, is more honorable than “Great Russian,” for it means literally: Little Russia is the first Russian, the oldest in its genealogical root.

The name of our people - Russia is known from the deepest antiquity ... "We are a single Russian people!" Ukraine stands for nothing but the outskirts, the marginal lands of the state. Anyone who is at least familiar with history, with documents written at a time when they had never heard of "separatist" separatists, when no one "Ukrainian people" heard anything, he knows that in old papers they often use expressions : Ryazan Ukraine, Siberian Ukraine, Voronezh Ukraine. In the old song of the Siberian explorers, folded at the time when Erofei Khabarov went to Amur, it is sung: “As in the Siberian in Ukraine Yes in the Daur side ...” From the song, as is well known, especially the old one, you cannot throw out the words. For today's separatists, let me remind you that at that time there were no Ukrainians living in Dauria. And Siberian Ukraine meant the marginal Siberian land. Little Russians, podёldykivaya enemies of Russia, of course you can call the Ukrainians. And Kiev, in case of success, the separatists can rename to Mazepinsk, Petlyurovsk, Banderovsk. But from this Kiev will not cease to be the mother of Russian cities. Little Russia is the ancient original name of the part of Russia. And there is no point in denying us, Little Russians, the historical name of our Homeland. Separatists can call themselves whatever you like. He, Baba Paraska, battered for several days on the Maidan for dollars, and on you - a symbol of the revolution in the Goat Marsh with the Order. Or a young girl with a brothel jumped out, put a wreath on her head - a Ukrainian ...

Yes, I am a Little Russian, the first, most ancient Russian. Maybe my ancestor during Igor nailed his shield on the gates of Constantinople. Why should I change the true name of my ancestors to a new one, which was invented by the founders of separatism, and today they impose on us rich and opolychennye "orange Galicians". Why should I consider Muscovites enemies, the Moscow culture hostile, when all Russian culture flowed out of the ancient Kiev Academy.

Not for this, my ancestors put their heads in battles with the Turks, Tatars, Poles; perished on convict galleys, in the dungeons of Polish castles, they did not fight for Poltava on Peter’s side, fought on the Borodino field in the Poltava regiment of Paskevich, so that their descendants would abandon the entire national legacy of their ancestors. In the name of what to do it? In the name of becoming a pan in fake Ukraine, a toy of political forces hostile to Russia?

I stand on the fact that Little Russia is the ancient ancestral home of great Russia, always bleeding in the arms of the separatists who carried the ruin to it. I always want to be the son of a free great country, not a small separatist stable. Orange agents of foreign intelligence services are disgusting to me; they have become the “master” of a state that does not depend on the “Muscovites” but depends on the “Washington regional committee”. Do the Little Russians wish to live in the occupation, to be a toy in the hands of the “gentlemen-ministers” and “master-masters” alien to us in the maintenance of foreign intelligence services? As for the types of occupation, I give the floor to the modern writer S. Sidorenko. “The occupation regime that now rules Ukraine is radically different from all previous invaders, the invasions of which the Little Russian people survived during their long history.

All the previous ones had mainly material claims to us. The Mongol-Tatars, for example, were content to receive tribute from us.

And even the Poles, in whose subordination Malaya and Belaya Rus had been for a long time, - although they tried to cheat us, plant a union with us, but perceive our people as slaves, as human material, they did not even want to dirty their hands about us - and they entrusted us to the Jews who systematically squeezed juices from us, earning future “troubles” on their heads ...

And the Germans, when they visited us or only gathered to us, although they supported all sorts of disastrous ideological projects for us — Lenin, and Hrushevsky with Petlyura, and Skoropadsky, and Bandera ... —in fact, they were more interested in things deeply prosaic: bread , lard, coal, rabsiloy ...
And the Communist Party that ruled here in the 20th century — with all the spiritual losses we suffered during the seventy years of its rule — focused mainly on the redistribution of property ...

Yes, and the goat-bearded Uncle Sam, who is already at our doorstep, who holds a weighty calculator in his hand and beats up impatiently with his hoof, he is primarily interested in the fact that he is able to count his calculator.

But for those who sat down on our neck in 1991, and were firmly fixed on it at the end of 2004, the main thing: to remake us spiritually, to erase the Russian soul from us, to change the spiritual image of the land where the great culture originated the world of Pushkin, Gogol, Dostoevsky ...
These came to our Russian soul ... "

It is time to understand and ask ourselves why we, Little Russians, hate our “Russianness” as something alien, podlyedyvaya orange ambitions of “professional Ukrainians” and “independent” Bolshevik belch? We are not ukry, we have not stolen anything. The land of the Ukraine, New Russia, Slobozhanshchina-is Russia!