Yanukovych chooses association with the EU

11 September 2013
241
One gets the feeling that the so-called “candy dispute”, which began with the fact that Russia found something inappropriate in the products of a well-known Ukrainian manufacturer, dotted the “i” in the emotional throwings of the Ukrainian president. During his entire presidential term, Viktor Yanukovych tried to sit on two chairs at once and set Ukraine on them. These two chairs were: one - the entry into the European Union, the second - the entry into the Union Customs. Viktor Fyodorovich bowed out in front of Brussels, assuring European officials that Ukraine wants to go exclusively along the path of fraternization with the EU, and at the same time the Ukrainian president informed the representatives of the Customs Union that he was almost ready to send Ukraine along the path of Eurasian integration. Apparently, these mental torments seriously affected the general well-being of the Ukrainian leader. He did, you know, could not make a choice. Well, downright not the president of the country, but Agafea Tikhonovna Kuperdyagin from the “Marriage” of N.V. Gogol:

If Nikanor Ivanovich’s lips were to be attached to Ivan Kuzmich’s nose, to take some swagger, like Balthazar’s Balthazarych’s, and, perhaps, to add Ivan Pavlovich’s prettiness to this - I would have decided immediately. 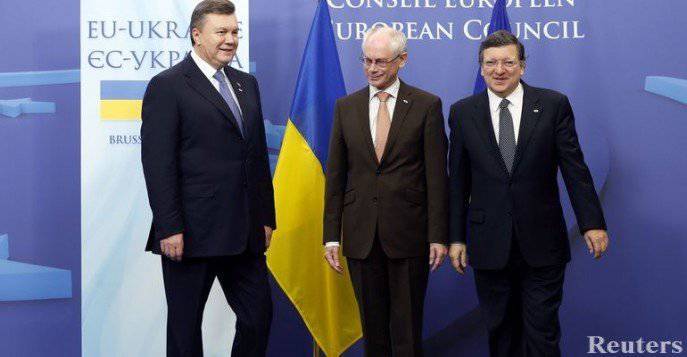 Nothing resembles? .. Now, if gas prices are for both Belarusians, loans for both Spaniards and Italians, living standards like Luxembourgers, and, perhaps, adding to the Russian market - I would have decided immediately.
But Viktor Fedorovich stubbornly asserted: either "the swagger of Balthazar Baltazarych", or "the dignity of Ivan Pavlovich" ... There is no third.

And now, realizing that there is no strength to continue, Viktor Yanukovych announces his landmark decision. Blaming the Russian side of unleashing a customs crisis (“candy dispute”), recalling the expensive gas and stating that such actions from Moscow do not look like partners at all, Yanukovych speaks about choosing to associate with the European Union. At one of the recent internal party meetings, the President of Ukraine noted that he literally every morning had to start with a prayer in which he asked God to give him patience and restraint in communicating with the “strategic neighbor”. It turns out that either Viktor Fyodorovich prayed poorly, or he prayed to the wrong gods - his patience ended ... I endured tolerance, you know, but the Russian authorities pushed me towards Brussels, something about this message that the President of Ukraine informed me of. In order to strengthen the strength of his position, during a meeting of the Party of Regions faction, Yanukovych even asked those who disagree with him to stand, pointing to the door. No one began to get up, and therefore the Ukrainian head was convinced that the decision was made exclusively right.

Perhaps the most rigorous assessment of the decision of the Ukrainian president, aimed at following the path of association with the EU, was given by the adviser to the head of the Russian state, Sergei Glazyev:

The agreement says that Ukraine accepts EU technical regulations, cancels duties on trade with the EU, accepts its sanitary and phytosanitary control norms. That is, everything that Russia, Belarus and Kazakhstan have transferred to the Customs Union, Ukraine will implement under the control of Brussels on the basis of European directives. In addition, in the ten articles of the Association Agreement, Ukraine undertakes not to make changes to its legislation that would contradict this agreement, that is, it will have to coordinate its laws with Brussels. To sum it all up, Ukraine, with the signing of the Association Agreement, loses its independence and ceases to be for us not just a strategic, but even a full-fledged partner.

The decision of Viktor Yanukovych was commented on by Russian Prime Minister Dmitry Medvedev. He noted that if Ukraine signs the Association Agreement with the EU, the path to the Customs Union for this state will be closed, since the regulatory framework and the regulations of the organizations do not coincide.

So what do we have? Viktor Yanukovych has been trying for a long time to get away from an unequivocal answer about the direction of integration for his country; then, quite unexpectedly, the Customs Conflict is being played out, which is related to the fact that the sanitary services of Russia find in the Ukrainian sweets something that does not meet the quality requirements; trucks and wagons with Ukrainian goods embark on the Ukrainian-Russian border; The Ukrainian president considers this an attempt at pressure and states that he chose a course in the EU as the direction of integration; Russian authorities are offended, and even something like a threat appears.

Of course, this situation does not paint either the Russian or the Ukrainian political leadership. The fact that Viktor Yanukovych, excuse me, pulled the rubber for several years in a row, this is not good. But is the best way to increase the chances of his desire to join the Customs Union to unleash a strange customs dispute? As it turns out now, it is far from the best, if not the worst, since the vehicle for Ukraine becomes like a ghost ship, sailing farther and farther away. How close will the European Union “ship” be to Ukraine? - this is another question. Most likely, the European economic "ship" to Kiev is still suitable, but at the same time it opens its holds not for letting Ukrainian goods into them, but for the final filling of the Ukrainian market with goods of European origin. How much Ukrainian producers will benefit from this is clear to everyone: they will benefit from a lump of butter ...

If someone has the illusion that after concluding an associative agreement with the EU, Ukrainian goods will go to the European Union in a continuous stream without any customs or other barriers, then you should pay attention to statistics regarding other countries. The association agreement with the EU was signed by the following countries each (just a few examples): Algeria, Albania, Jordan, Serbia, Chile, South Africa. At the same time, in all the above cases, the number of imports of goods from Europe after the signing of the Agreement has increased significantly, but exports from these countries to Europe have decreased. Greater import growth corresponds to Serbia: import from the EU has increased by 58%! It turns out that European manufacturers benefit from the Agreement, but the production sphere of the associates themselves suffers significant difficulties.

Of course, now the same Yanukovych will long say that the association with the EU is not only the economy, but also security, the humanitarian sphere, the strengthening of political ties. But these are already obvious attempts to justify their decision in all possible ways. Humanitarian relations at the level of endless conversations about the need to support the LGBT community ... Or security, when Big Brother again wants to use the Ukrainian defense industry for colanders, saying that it does not meet the parameters of Europe and NATO ... If it is necessary for Kiev, then for God's sake ...

And how strengthened after the conclusion of the Association Agreement with the EU are the ties between Algeria and the EU, Albania and the EU! - How many Algerian and Albanian migrant workers replenished the labor markets of countries belonging to the European Union, forcing the Europeans themselves to be unprintable, realizing that this is an open dumping ...

It is clear that the decision of Yanukovych is difficult to call rational and balanced. It is clear that in the economy of Ukraine it can strike. But the thing is that the Ukrainian president was simply offended. They pushed him, he sniffed. Maybe they pressed hard, they did it painfully - they overdid it, and he rushed to cry in a European vest. Well, what will happen when the pain subsides, when you need to turn on the "thinking apparatus"? Will the forces remain to realize that mistakes have been made, that it is time to play back and make more expedient decisions. By the way, this very “apparatus” will have to be turned on both by Kiev and Moscow, because not only Ukraine but also Russia will lose Ukraine’s bank to the West. And most importantly - people will lose: simple Russians, and simple Ukrainians. If the authorities of our countries have business with us, then it is time to stop butting and crumble in mutual reproaches. Instead of “candy wars” and speeches with a tear in his voice, you need to sit down at the negotiating table and, in our way, in a human way, discuss the situation with a cup, a slash, and a cucumber. And then, you know, they tightened their ties - blood does not flow to the brain ...

Ctrl Enter
Noticed oshЫbku Highlight text and press. Ctrl + Enter
We are
Kyrgyzstan is ready to become the fourth member of the Customs Union: who will be in the black?When will Viktor Yanukovych stop playing Scarlett O'Hara?
Military Reviewin Yandex News
Military Reviewin Google News
241 comment
Information
Dear reader, to leave comments on the publication, you must to register.