Economic G20 Summit in St. Petersburg: waiting for a salute from all guns 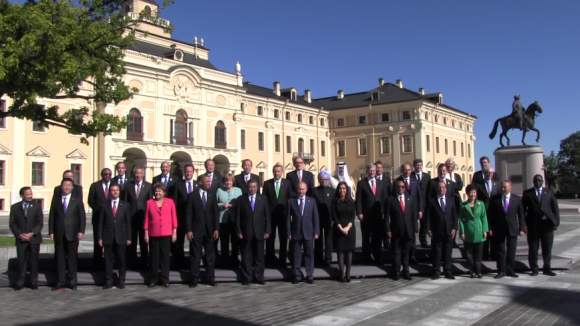 Perhaps, for the first time, interest in this summit is so lively and extensive. Moreover, this interest was not connected with economic agendas, which, according to the regulations, were the main ones for discussion at the summit. The main reason for interest is, of course, Syria. They will meet — they will not meet — they wondered both the participants of the St. Petersburg international forum themselves, and, without exaggeration, billions of people on our sinful planet. “They will meet - they will not meet” - this, of course, is about Putin and Obama.

Met. We talked privately. We got up from the seats. Shook hands, each with their own opinion. It would be strange to expect something else, but by and large, naive. And therefore, the standby regime in Syria continues, and the billions mentioned (of people, of course ...) continue to turn to news reports in order to find out what HE (not to be confused with the UN) decided on Syria in general and Bashar al-Assad in particular.

However, it is worth to be distracted from the Syrian subject matter and nevertheless turn to the economic agenda, which, we recall, was paramount during the G-20 summit in the northern capital of Russia.

The agenda, in fact, was offensively banal, and therefore the results of G20 were easily predicted. Twenty leaders of states have gathered to discuss how they can cope with world economic problems in conditions when the crisis successfully deals with the leaders of the states themselves ... It could even be something sensible and decide if the Twenty itself did not look so variegated. To understand how great the potential of positive economic agreements was, it is enough to recall the fable about the swan, cancer and pike that does not lose its relevance. Everybody remembers perfectly where the one is torn in the fable, another is moving backwards and the third is pulling away ... In general, there was something similar at the summit, because if you take a couple of combinations of Russia-PRC-USA or Russia-Saudi Arabia-Turkey (who here are the swans, and who is the rest to judge everyone individually), then the general vector of economic thrust was somehow weakly outlined ...

Of course, the proposals were reasonable too. Each participant tried to designate his vision of the process of bringing the world economy to a tangible growth. Numerous proposals on the rights of the receiving party, and Russia this year is chairing the G-20, Vladimir Putin was noted. The main proposals of the Russian president to improve the global economy looked as follows: take measures to stimulate the flow of investment finance in infrastructure projects, remove barriers to the free movement of cross-border capital. These proposals of Vladimir Putin are called main here, because it was these proposals that were supported by other participants. Proposals to improve the efficiency of migration policy were also considered, but did not receive much development, since specific principles were not voiced. It was not possible to work out a unanimous opinion on the resolution of issues related to reducing the deficit of bank lending.

What are the official results of the meeting in St. Petersburg were recorded in the final protocol. In the list of results are the following.

1. Obligations for the year (before the start of the next summit in Brisbane, Australia) to develop measures to improve the global investment field.

Frankly, such a decision does not cause much enthusiasm, since it is difficult to imagine that immediately after its adoption, the delegation, for example, Russia and Saudi Arabia, sat down at the negotiating table and began to agree on how we can invest in each other’s economies . Saudi Arabia has recently learned to invest in the practice of regional chaos (from the Caucasus to Syria), but with the investment of the state economies of other states (namely the states), it’s somehow not particularly impressive, except for a narrow circle of “friends”, professing a similar policy (as an example, a “superpower” named Qatar).

2. The G20 agreed to start active work on creating an expert network aimed at resolving the issue of banning corrupt officials from entering a particular country.

The streamlined formulation leads to some doubts about the work of this expert group. Either she will try to keep corrupt officials within the borders of a single state, so that, as they say, they know their place, or, on the contrary, it will help corrupt officials to solve the issues of overcoming state borders ... If we recall the level of corruption in our country alone (you do not even need to refer to the level of corruption in China, Brazil and further down the list), then international air carriers are generally at risk of being left without any profit ... Empty business classes with all the consequences ...

3. The agreement is not to overdo it with the state regulation of the economy, trying to bring it to sustainable and sensible growth.

But it will be extremely difficult to do. Difficult, because many national economies of both developed and developing countries have recently managed to get used to the fact that states are pouring billions into them. Someone is their billions, someone is someone else ... Not everyone is ready to refuse from such state aid, going exclusively to market management. Business has already sometimes forgotten how to work without help from the state. And many states are also not averse to exposing themselves as “nursing mothers”.

4. The central banks of the G-20 have pledged to follow the path in which all steps to change the direction of monetary policy will be verified and communicated to partners.

As they say, the song is beautifully sung ... But only to whom can every G20 central bank check it out? .. It's like in a game at the card table: well, gentlemen, mind you, do not cheat! All were nodding their heads, and instead of five trump aces in the sleeve they left four to each ...

5. Medium-term programs have been adopted to reduce budget deficits and structural economic reform, including to control public debt positions.

In this regard, I wonder what kind of programs to reduce the almost 17-trillion US debt is going to take Barack Obama. Perhaps, he will give up the costly operation in Syria, and at the same time he will withdraw troops from Afghanistan, without leaving thousands of military "advisers" and "assistants" in this country 50 ... Stop work on missile defense? .. Or maybe Obama will completely turn off the printing press, refusing to attempt to provide the national currency exclusively with foreign debt.

6. Separate agreement in the framework of the BRICS. As part of this agreement, Russia pledged to make a contribution to the so-called pool of foreign exchange reserves. The total pool scale was announced at the level of 100 billion dollars, the contribution of Russia - $ 18 billion.

Well, if this pool of BRICS will have an exclusively dollar nature, then the American financial system as a whole and Mr. Obama in particular will only applaud such a move ...

On this economic achievement of the Big Twenty in St. Petersburg ended. Overall picture, smiles, handshakes.

However, before that, they nevertheless touched on the Syrian theme, and in the format of a general discussion. Journalists about this discussion through the press service of the summit, as access to the "gazebo" was limited. It turned out that 11 leaders 20-ki the position of the American president (and he, it must be recalled, without the report of the expert group is sure that he gassed his own people precisely Bashar Assad) in Syria was supported. The support was expressed by the heads of Turkey, France, Canada, Japan, South Korea, Italy, Saudi Arabia, Australia and Great Britain separately the EU. Another thing is that this support in some cases turns out to be purely personal. The same British Prime Minister Cameron is forced to support Obama verbally, as the British parliament cut his wings ...

The crisis-Syrian G-20 summit in St. Petersburg is over. I want to say "salute", but the salute of all the guns, it seems, is ahead ...

Ctrl Enter
Noticed oshЫbku Highlight text and press. Ctrl + Enter
We are
Engineering Technologies-2012. The first days of the forumBRICS: friendship against the dollar
Military Reviewin Yandex News
Military Reviewin Google News
13 comments
Information
Dear reader, to leave comments on the publication, you must to register.