March 30 2013
34
Many have heard of the US Strategic Defense Initiative (SDI), better known as the Star Wars program, which got its name from the famous science fiction film by George Lucas. The program proposed by Reagan in 1983 for the year envisaged the creation of an anti-missile defense system with elements for locating attack weapons systems in space. Over time, the program completely discredited itself, as it demanded enormous financial expenses and posed a number of extremely complex scientific and technical problems to its creators. In turn, the USSR began to think about the use in orbit of combat manned vehicles much earlier than Americans, but today there are far fewer people who know about domestic developments.


Meanwhile, back in 1964, the USSR began work on the creation of the manned space station Almaz, which was developed by order of the Ministry of Defense. If you suddenly want to learn something detailed about the Almaz stations and start flipping through the space directories, then, to your surprise, you will find quite a few interesting things to learn enough to make a lot of effort. The fact is that “Diamond” was launched into space under the pseudonym “Salute”. Stations with this name have already flown into space, while the task of combat space exploration required increased secrecy, which the USSR coped with relatively easily.

The system, which began to be designed in 1964 year, was really unique for its time, the Americans did not have such developments even in the long term. The manned space complex "Almaz", which began to develop the Chelomey Design Bureau, included an orbiting station weighing 17,8 tons and a volume of about 100 cubic meters. meters, a high-energy transport supply ship (TKS) with the newest docking assembly and a mass of 18 tons and 2 reusable launching vehicles, each of which could take the cosmonaut 3 and 100 kg. cargo. This complex, in addition to purely scientific tasks, could also perform well-defined military functions — shoot down enemy satellites, conduct reconnaissance, and even bomb bombard targets on the surface of the planet. While the station’s full crew consisted of an 6 man, it could also be conducting combat in a completely autonomous mode without the participation of the pilots.

A sketch project of the new station, which was called “Almaz”, in 1967 was adopted by the Interdepartmental Commission, which included 70 famous scientists and heads of scientific research institutes and design offices, as well as representatives of the Ministry of Defense. In 1968, the layout of the future station was ready, and at plant No. XXUMX (now known as the Khrunichev plant), production of the buildings was started. 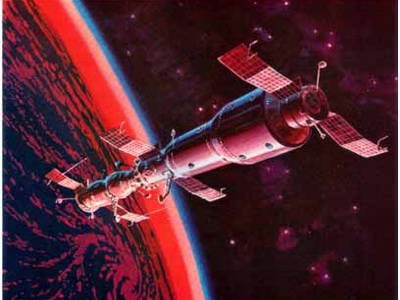 The station’s project suggested that Almaz would become a much more sophisticated space reconnaissance aircraft than unmanned automatic photo-reconnaissance vehicles of the Zenit series. A more powerful camera on Almaz used the film to ground objects only by the will of the cosmonauts themselves. At their disposal was the most powerful "space binoculars", which allowed to look at the Earth in the infrared spectrum. If the crew noticed something suspicious, he could launch a series of shots. The photographic film appeared right there on board the station, the pictures worthy of the attention of military intelligence were transmitted to Earth either through a television channel or in a special descent capsule. In addition, the station could monitor the surface of the planet using side-scan radar.

The reconnaissance function of the station required its constant orientation to the Earth with the possibility of making turns to search for and target photographic equipment at the military objects of interest. To this end, a very complex triaxial orientation system was implemented at the station, which provided high accuracy when photographing and made it possible to smoothly perform turns along the longitudinal axis at any angle. The 2 corrective rocket engine was responsible for the orientation of the station in space. Applied at the station scientific developments were advanced for its time. An electromechanical stabilization system was installed at the station, which included a spherical engine-flywheel and a ring flywheel with a large kinetic moment. At that time, a flywheel suspended in an electromagnetic field was a very original technical solution. Another exotics station was digital computers "Argon16", which controlled the station's observation equipment.

The station "Almaz" had the following dimensions: maximum length - 14,6 m., The largest diameter - 4,2 m., Habitable space - 100 cube. m., the total mass - 17,8 tons., payload - 5 tons. The station was designed for a crew of three people, and the total time of work in near-earth orbit was - 410 days. With a docked supply ship, the crew could be increased to 6 people. The power supply of the station was carried out using solar cells with an area of ​​52 square. meters, which provided power in 3,12 kW.

By construction, the station’s pressurized compartment was divided into 2-e zones, which were conventionally designated as zones of large and small diameters.

In front of the station in the small-diameter zone (diameter 2,9, length 3,8 m.) There was a table for eating, devices for its heating, taps with hot and cold water, above the table was a control panel of the station’s life support system, communications and lighting. Two sleeping places were located here - one is stationary, the other is folding. On the sides of the household zone there were cabinets in which there were scientific and medical equipment, as well as household electrical equipment: a tape recorder, a vacuum cleaner, a radio receiver. This zone was equipped with observation windows.

The household zone was followed by a working compartment or a wide-diameter zone (diameter 4,15, length 4,1 m.). There was a station control station with an optical sight and pan-observation devices, a circular periscope, sanitary and hygienic and medical equipment, reconnaissance equipment. Thus, the optical telescope located behind the working compartment for observing the Earth’s surface took up space from the station to the ceiling.

Taking into account the fact that during the design of Almaz in the United States, work was carried out to create various kinds of space interceptors at the station, measures were taken to protect against such spacecraft. The station received the 23-mm automatic gun, designed by Nudelman, which could be aimed at the target through an optical sight - reticle, reversing the entire station. The gun was specially redesigned for firing in a vacuum and could be used not only to protect the station, but also to destroy any space targets in the area of ​​destruction. This installation received the symbol "Shield-1", later on, the same designer Nudelman developed a new system "Shield-2", which received the 2 rocket "space-cosmos".

The transport ship of the station "Almaz" was not inferior in size to the station itself was 17,5 m in length, diameter - 4,2 m., Habitable volume - 45 cube. m., the total mass is 17,5 tons and the payload in 12,6 tons. The ship was designed for a maximum crew of three people and a maximum operating time of 7 days, as part of the Almaz complex, the service life increased to 200 days. Power supply of the ship was carried out from solar panels with a total area of ​​40 square. meters that were able to provide power in 2,4 kW.

Thus, almost 20 years ago, before Reagan’s famous speech, which frightened the world of Star Wars, the USSR began the development of a dual-purpose orbital station, which in addition to performing quite peaceful scientific programs, could perform a well-defined list of military tasks.