Why don't they love us? Interview for STORY magazine 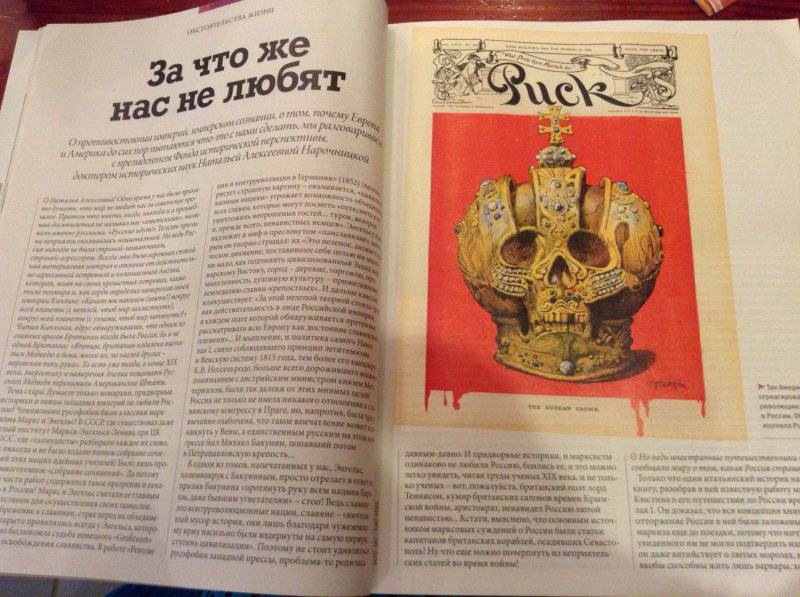 On the confrontation of empires, imperial consciousness, why Europe and America are still trying to do something with us, we are talking today with the President of the Fund historical prospects, doctor of historical sciences Natalya Alekseevna Narochnitskaya.


- Natalia Alekseevna! At one time it was customary for us to think that the world does not love us for the Soviet past. Given that no one, anywhere, never in the past decades has called us “Soviet”, called it Russian. "Russians are coming!". That is, the cause of hostility turned out to be - national. But Russia has never been an invader country, an aggressor country. It has always been a huge calm mainland empire, unlike really aggressive island and colonial England, which, living on its tiny islands, captured half of the world and, as Kipling proudly determined the intentions of his Empire: “Rope we will throw (take!) Around the entire planet ( with a loop to overwhelm the world) Around the entire planet (with nodes to tighten the world)! ”Reading Kipling, you suddenly discover that Russia has always been one of Britain’s main enemies, and not just Britain:“ The Japanese, the British from afar clung to the Bear in sides, M a lot of them, but the impudent of others - the thieves of the Yankees' hand. That is, already then, at the end of the nineteenth century, the energy and intentions of England to pinch the Russian Bear, were adopted by the American States.

- The theme is old! Do you think only monarchies, court historians and singers of the western empires did not like Russia? The champions of Russophobia were the classics of Marxism, Marx and Engels! In the USSR, where there was even a whole Marx-Engels-Lenin institute under the Central Committee of the CPSU, where “talmudists” examined their every word, the complete collection of these works of our ideological teachers was never published! It was just a multivolume "collected works". Because part of the work contains such contempt and hatred for Russia! Marx and Engels considered it the main obstacle to the implementation of their plans. Neglect of the Slavs, the fear of their unification was always manifested openly in Engels, who was greatly concerned about the fate of the German “Großraum” in the event of the liberation of Slavs. In “Revolution and Counter-Revolution in Germany” (1852), Engels paints a terrible picture - it turns out that “civilized nations” are threatened by the possibility of uniting all Slavs who may dare “push back or destroy unwelcome guests ... Turks, Hungarians, and above all hated Germans”. Engels also owns the myth of the notorious “Panslavism”, with which he stubbornly frightened:

“This is a ridiculous, anti-historical movement, which has set itself the goal of no less than the subordination of the civilized West to the barbarous East, the city - the village, trade, industry, spiritual culture - to the primitive agriculture of the Slavic serfs”, and then the classic clicks: “Behind this ridiculous theory was a formidable reality in the face of the Russian Empire ... in every step of which there is a pretense to consider the whole of Europe as the wealth of a Slavic tribe "... [1]. Both the thinking and politics of Nicholas I himself, who faithfully observed the principle of legitimism and the Vienna system 1815 of the year, especially his Chancellor K.V. Nesselrode, who most valued mutual understanding with Austrian Minister Prince Metternich, were so far from these imaginary goals! Russia not only had no relation to the Slavic congress in Prague, but on the contrary was extremely concerned that such an impression could arise from Vienna, and the only Russian at this congress was Mikhail Bakunin, who later fell into the Peter and Paul Fortress ...

In one of the volumes printed here, Engels, polemicizing with Bakunin, simply cuts off in response to Bakunin’s appeal “to reach out to all the nations of Europe, even to former oppressors” - stop! After all, the Slavs are counter-revolutionary nations, the Slavs are “insignificant rubbish of history, they are only due to a foreign yoke were forcibly lifted to the very first stage of civilization”. Therefore, one should not be surprised at the Russophobia of the Western press, the problem was born a long time ago. Both court historians and Marxists equally did not like Russia, they were afraid of it, and this can be easily seen by reading the works of scientists of the 19th century, and not only scientists - here, please, the British poet Lord Tennyson, the idol of British salons from the time of the Crimean War, the aristocrat hated Fierce hatred of Russia ... By the way, it turned out that the main source of Marx's judgments about Russia were the articles of the captains of British ships besieging Sevastopol! Well, what else can you learn from enemy articles during the war!

“But after all, foreign travelers in the nineteenth century informed the world about how terrible Russia is ...”

Ctrl Enter
Noticed oshЫbku Highlight text and press. Ctrl + Enter
We are
A great interview with Sergey Lavrov: about Ukraine, Obama and IranWhat you didn't want to know about England
Military Reviewin Yandex News
Military Reviewin Google News
62 comments
Information
Dear reader, to leave comments on the publication, you must sign in.