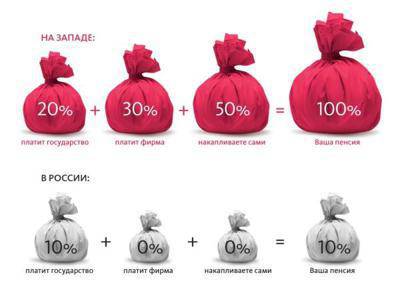 
In this country, both men and women retire in 67 years. At the same time, for the sake of objectivity, it must be added that the average life expectancy in Norway is about 90 years.

An old-age pension consists of several elements: a basic part, an additional part and (or) a special allowance for the accumulation of income. May include retirement benefits and allowances for children and spouse related to income.

Basic pension is granted without taking into account previous income or payments. It is enough from 16 to 66 for years to work out the 3-year insurance period (without being in the country). But to receive a full pension (that is, including an additional part), you need at least a 40-year insurance period. If the pensioners are spouses, then the basic pension of each of them is equal to 85% of the basic amount. These regulations were introduced in 2009 by the pension system reform.

The basic part of the pension in Norway is calculated on the basis of the insurance period and does not depend on the contributions paid by the future pensioner to the National Insurance System.

Regarding the additional part of the pension there is one nuance. A citizen has the right to receive an additional pension if his annual income during 3 years exceeded any average annual number of “G” after 1966 of the year, and the value of “G”, for example, on 1 in January 2010 of the year was 72881 Norwegian krone (5829,55 €) . In total, the supplementary pension and the special supplement should not be less than 1,94G.

Financing of the National Insurance System in Norway is carried out through the payment of contributions by employees, entrepreneurs, employers and the state. The size of contributions is determined by the Parliament; they should not exceed 25% of revenue.

Contributions for employees are 7,8% of income; for individual entrepreneurs - 11% of income. Employer contributions vary based on salaries paid and location of the enterprise (from 0 to 14,1%).

Here, a person is entitled to receive a pension from 61 of the year. But the further the future retiree puts this moment aside, the more money he will receive.

The pension consists of different parts. One part is called common. The pensioner receives another part of the money from the employer (approximately 10% of the salary).

In Sweden, the retirement age for men and women is the same - 65 years. You can work further - and the higher the pension will rise. The increase in pension in Sweden is approximately 10% for each year worked after 65 years.

Interestingly, a pension can be received not only in whole but also partially: 25%, 50% or 75%. You can work all day or part of the day.

When calculating pensions, the amount accumulated on a special account for thirty working years is taken into account. Recalculation of pensions is done once a year. The minimum pension in Sweden is 5500 CZK (600 dollars), the average is 9200 CZK (1000 dollars), the maximum is 36800 CZK (4000 dollars). As a benefit, the state provides pensioners with free medical care and medicines and free education.

The main component of pensions in this country is the state one. It is based on the principle of solidarity between generations. Older people receive a pension due to the contributions of employees (19,6% of earnings before taxes). The insured workers and employers pay them in half. Accordingly, the insured's contribution is 9,8% of his salary.

The state insurance system covers all employees, except for officials (the last pension is paid from the state budget). Entrepreneurs and persons of liberal professions: doctors, lawyers, artists may not participate in state insurance. However, most of them pay fees to professional insurance companies.

In Germany, in 2006, the retirement age for men and women was increased from 65 to 67 years. This is due to the increase in life expectancy. By the way, according to the latest data, the expected average life expectancy in Germany is 77,5 for men and more than 82 for women. Raising the retirement age is carried out in Germany gradually: every year it is added by a month. Those born in the 1950 year must work through the 65 years and 4 months, those born in the 1964 and later full 67 years. At the same time, many retire early, which leads to a reduction in pension (by 0,3% for each unfinished month).

And if a person was unemployed for many years? Or earned a little? The state comes to the rescue. It pays the difference between the pension and the cost of living. In addition, the state pays for housing (limited by the meter), heating and other housing expenses.

Persons in the liberal professions and small entrepreneurs pay 16,35% to the pension fund. Most employees pay the same amount, and at the same time, half is paid by the employer.

The pension in France is 50% of the average salary calculated over the last eleven years of work.

Recently, the French government in the person of Prime Minister Jean-Marc Herault presented a version of the pension reform. This is the third pension reform in the last decade. The reform aims to reduce the deficit of the pension system (7 billion euros). Moreover, according to forecasts, in 2020, the deficit will be 20,7 billion euros. But the system is likely to be balanced by 2040, thanks to the current birth rate increase.

In 2010, N. Sarkozy raised the retirement age from 60 to 62 years, which caused demonstrations and strikes. The current president unions promised a similar wave of protests. The business was able to prevent direct tax increases and achieve a gradual increase in contributions. The rate of the main tax replenishing the pension fund today is only 7,5% for the working population. According to Hérault reform, the growth of contributions over the coming years will lead to a small total increase (by 4 percentage points, or by 0,3 euros per month for an employee with a minimum salary) to 4,5. With 2017, it is planned to introduce allowances for employees working in heavy industries.

Hollande keeps his election promise: despite the latest requirements of the European Union, the French government did not raise the retirement age. However, Ero's reform changes the length of service required to receive a full pension: now you need to work out the 41,5 of the year, and by the year of the 2035 you need the 43 of the year. The new rules will affect those born after 1973. As a result, the government will still force the majority of citizens to work even after 62 years.

The basic state pension here is for men older than 65 and for women older than 60. The size of the pension depends on the length of service. The state guarantees payments in the amount of 20% of the average salary of an employee (translated from pounds sterling - about 440 euros per month). Labor pension is also formed by employee contributions - in half with the employer. This part of the pension depends on the size of the salary and amounts to slightly more than 20% of the income.

In Britain, there are many ways to accumulate and private pension. Funds transferred to special APFs are not taxed.

The size of pensions in Britain is very different: rich pensioners receive 80-90% from their previous salary, the poor - a little more than 20%. The average replacement rate in the UK is around 50%.

1) Basic State Pension. It is calculated for men, provided that the work experience is 44 of the year, and for women who have worked for 39 years. However, if the employee has reached the retirement age after April 6 2010, the required work experience is reduced to 30 years. In addition, since that time, the retirement age for women has been increased from 60 to 65 years. If there is not enough experience, then the pension is calculated as a percentage of the years spent.

2) Additional state pension. It was introduced on April 6, 2002, depends on the salary during all the years of operation and is not charged to those who were engaged in self-employment. In the event of the death of a spouse who received an additional state pension, the second spouse may be eligible to receive up to 50% of this pension.

3) Professional pension scheme. Implemented by the employer in relation to its employees. The rates of contributions are indicated above.

As for Russia, here, according to the latest innovations, the pension fund contribution rates are 22%, of which 6% is the joint part of the tariff, and 16% is its individual part. Moreover, this taxation concerns the so-called marginal base (568 thousand rubles per year). If the base is exceeded, then the state throws over ten more percentage points, that is, the total amount of payments is already 32%. Additional 10% make up the joint part of the tariff. Insurance premiums are paid by employers. By the way, they also bear the burden of 2,9% social insurance and 5,1% of compulsory medical insurance of employees. Thus, the total insurance load can be 2013-30% in 40 year.

The deficit of the Pension Fund of the Russian Federation in 2013 is more than 2 trillion rubles (3% of the country's GDP).

Ctrl Enter
Noticed oshЫbku Highlight text and press. Ctrl + Enter
We are
Are there any mistakes in pension reform?The result of reforming the monetary allowance of military personnel in 2012 year
98 comments
Information
Dear reader, to leave comments on the publication, you must to register.