3 September 2013
6
There was little entertainment in the military camp at one of the naval arsenals ... Due to the remoteness of the military unit from any centers of civilization, layoffs were not practiced as such. Remains perhaps that going to the movies on Saturdays and Sundays. Often, for some reason, they brought Indian, five times they watched "Zita and Gita", "Bobby" and it seemed "Invincible." That's just during such a campaign, everything happened. 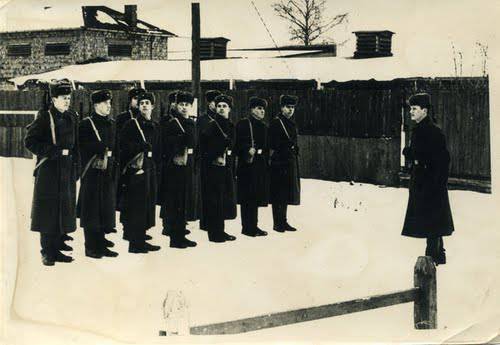 On Saturday, the evening film show dragged on, and the company quietly lined up and, trying not to stomp too much ("civilians" lived in the town), headed for the location. And, to be sure, they showed something that time, which made the staff relaxed, and, as they say, "project ... hal flash". The company commander who was the "responsible" at that weekend, it was not clear with what frightened he suddenly gave the command: "Mouth, sign-up!" And the time was later. And then the terrible happened ... the company was silent! Then no one could say something, why ... that was because the evening was warm, summer, not at all "military", that was because many common thoughts came to mind: "Cho, however, yell middle of the night? " In one way or another, the company was silent, and the Starley considered this to be a “revolt on the battleship Potemkin.” Commands “Sing along! “Accompany the silent procession all the way to the parade ... On the parade ground, the company troop walked along the line, apparently picking up censorship words for dialogue, (I must say, he had a strange habit, in“ extreme ”situations he spoke exclusively literary, addressing to “YOU” even to malicious “zaletychik.” In the brief speech that followed, the company commented on the successes achieved by the fighters in their desire to become a notorious sexual organ, and ended with a phrase, for some reason memorable, and after 32 years later, “I will arrange a black terror for you!” But being an officer m politically literate, corrected himself "No, RED TERROR!" "The Silence of the Lambs" became downright ominous ... The threat was not clear to anyone, and therefore caught up with more horror than usual ... The most physically prepared sailors suddenly remembered tomorrow's physical activities The company man was a good hand-to-hand player, and he held arms and legs about the same, somewhere at the level of an adult chimpanzee and the blow was put on him. “Shustril” began to think over ways to go to the galley in order to sit out the bad times on peeling potatoes, and some remembered charms vycherp Bani manually summer latrine ... The threat of total destruction has hung over all. Nobody wanted to retreat: the company stubbornly remained silent, the company wheezing "Sing it!"

Somewhere at one o'clock in the morning the action was interrupted by the person on duty, who personally arrived on the parade ground. But it was not the end, Silent stomping along the parade-ground continued until 17: the next day's 00. All this time, everyone who had such an opportunity, visited the parade ground to be personally present in this circus of horror and absurdity. In 17: 03 is completely embarrassed, Starley went home for supper, promising to continue beating babies a little later. Depressed sailors dispersed around the cabin, discussing at once the sad prospects for further service. And suddenly (well, how could it be in a fairy tale without this) the team shattered the pretty shattered nerves of the personnel: “Company, Attention! The company’s duty officer on the way out!” And everything would be fine, but the official shouted as if a beloved one arrived at the company, but at that time, alas, the late, secretary of the Central Committee of the CPSU, accompanied by Sabrina and Samantha Fox, "in negligee", is essessno. The miracle was not so grand, but also very, very.

The report from the crazed duty officer of the company was taken by Rear Admiral Poluyanov, the head of the arsenal, a person highly respected for being favorably disposed towards the "lower ranks" and mercilessly demanding of his comrades officers. The very appearance of the admiral in the company cockpit was an event out of the ordinary ... At the end of the report, a completely unexpected question followed: "What does the company do in the cabin instead of being in the cinema hall?" After listening to the explanations of the duty officer, the admiral very correctly expressed a desire to immediately see the company where she was supposed to be at that time. In order to immediately clarify the situation, I would say that the year was 1985, then for the first time, on the 40 anniversary of the Victory, the movie “The Battle for Moscow” was going on in all cinemas. The viewing for the servicemen was obligatory, and the company’s moratorium on cinema, dragged, if not for treason, then to undermine the authority of the party and political nihilism - for sure!

Driven by the cries of sergeants, the marines ran down the stairs ... (I just want to write, "stumbling and trampling the fallen ...") and quickly hastily disappeared in the direction of the cinema.

I only know about further from the words of the duty officer of the company ... The company company returning from dinner didn’t find anyone except for the daily attire, didn’t jump off the mind of a small business: grabbing the phone, demanded to connect it with the chief of the arsenal in order to immediately understand what happened . However, they didn’t connect him to the Rear Admiral - the chief isn’t great, but he was connected to the arsenal’s political commissar, Kapraz Sumbaev, who explained the mouthpiece of the company to the company commander, finally promising the latter transfer to the battalion to be no closer than ZFI. That's how it all ended, the company company left the idea to approximately punish the "singing" company, and the latter considered it best not to remind about it. Such is the victory of ideology over unity of command.