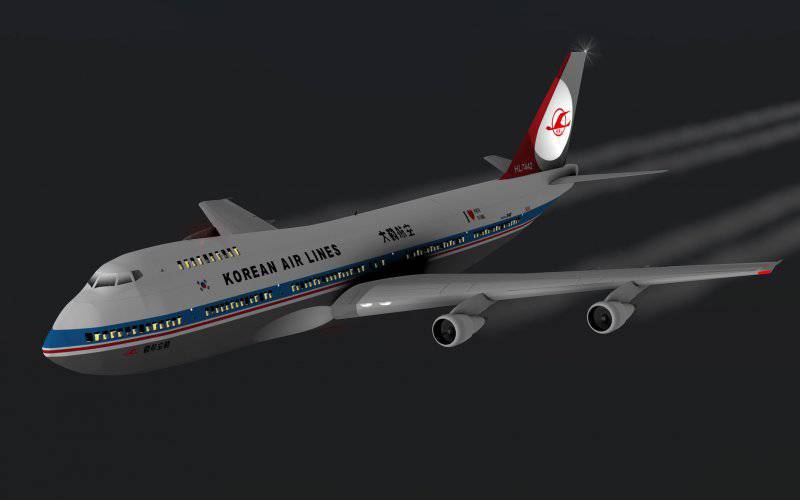 Finding out the true background of the events that occurred exactly thirty years ago in the night sky over Sakhalin and the Sea of ​​Okhotsk is also not easy as proving and confirming the truth of the moon landings of Americans. In both cases, for the seeming simplicity and irrefutability of the version that is persistently promoted by the West, something completely different looks through ...


Meanwhile, to understand, despite all the obvious inconsistencies, it is necessary. After all, the 1983 incident of the year became a convenient excuse for unleashing another paranoid-hysterical company against the USSR by Washington and its allies, and helped unite the anti-communist bloc. President Ronald Reagan found another reason to confirm the earlier thesis about the USSR as the “evil empire” - a term borrowed from the movie “Star Wars”. A Western propaganda attack frightened a part of the Soviet elite so much that two years later with both hands it voted to take the favor of our geopolitical rivals Mikhail Gorbachev to power.

Once again, it does not make sense to tell in detail about the events of September 1983: the number of newspaper publications about the downed South Korean Boeing amounts to thousands, books have been written about this and films have been made. Let me just remind you that the most important accusation against us is the disproportionate use of force against the civilian aircraft of the South Korean airline Korian Airlines, which followed the first day of 1983 autumn, the 007 flight New York-Anchorage-Seoul, as a result of which 269 passengers and crew members.

But to this day, many facts work against the Western version of the "peace plane". This is a significant deviation of the Boeing from the flight route more than five hundred kilometers almost immediately after takeoff from Anchorage.

In response, we are told that the pilots were simply mistaken. But how many история knows the cases when passenger planes with experienced pilots, who had not once or twice flown along this route, went so far to the side?

And for what reason did the US air traffic control services not warn Korean pilots that they were on the wrong course?

There is still no clear answer to the question of why the “new” 007 flight route ran precisely over Kamchatka, the Kuriles and Sakhalin - in other words, areas that were and still are of strategic importance for the defense of our country. Again they object: what kind of information such a civilian plane could have collected, if everything is already visible from the satellites. Well, firstly, not all is noticeable from orbit through the shroud of the earth's atmosphere even now. And, secondly, one of the possible goals of a possible invasion of our airspace was to collect data on the organization of Soviet air defense systems that were forced to work on the intruder.

Another unanswered question from the West was the synchronization of the flight of the South Korean plane with the American reconnaissance satellite Ferret-D and the American spy plane.

In addition, the incident occurred against the backdrop of the provocations of Washington, which continued unabated in 1983, which had become so impudent that it even authorized an imitation of bombing at one of our military airfields on the Kuril Islands.

And the main question to which there is no answer: how could the pilots of Korian Airlines not see the Soviet military aircraft that was next to them, which indicated its presence both by rocking its wings and warning fire. Moreover, they also tried to leave, taking a higher echelon.

The suspicions are even more pronounced when you find out that in April 1978, another airliner, Korian Airlines, of the 902 flight, en route from Paris to Seoul through the same Anchorage, also “got lost” and, quite possibly, quite by chance appeared in the sky over our other the most important area is the Kola Peninsula. He was forced to land, after the passage of the formalities of the passengers were released, the pilots were not punished, and expelled from the Soviet Union. This is a fairly well-known fact, but few people here know that in 1992, one of the most authoritative South Korean journals published an article that contained the confessions of the captain of that same Corian Airlines flight with the CIA. It was on the eve of Boris Yeltsin’s trip to Seoul when he handed over the “black boxes” of the 007 flight - maybe no one told him that due to the aforementioned publication it was advisable to postpone such a ceremony for a more detailed study of the issue.

The presence of special services is also strongly felt in the incident over Sakhalin. The commander of the "Boeing" Jong Ben Ying was in his time the personal pilot of the South Korean ruler Pak Jong Hee.

Working with the first persons of the state implies a mandatory procedure for passing an inspection through the special services, even, rather, long-term cooperation with them. However, even then, and today, South Korean intelligence cannot be completely independent in its actions - it goes together with the Americans. But that's not all. The influential South Korean newspaper "Chosun Ilbo" then posted a message about the landing of the allegedly downed "Boeing" in Sakhalin, referring to the data of the CIA. But this kind of cooperation of journalists with the special services, and even foreign ones, is not accepted.

There is also a statement posted on the Internet by an American whose father, a cadre intelligence officer, did not take the 007 flight literally ten minutes before departure - on the advice of his fellow workers. But the most surprising thing is the writings of Western “writers”, who say that in fact “Boeing” was not shot down, but was only forced to land on the territory of the island administrative and territorial unit of the USSR. The question about the further fate of the passengers is given a simple answer: they are kept in the GULAG, because special “secret” camps still remain on the territory of Siberia. Cases of phone calls to relatives made by those who should have died thirty years ago are cited as “evidence”. For example, an engineer who was discussing electronic systems aboard a Korean airliner unexpectedly called his mother, but only managed to report that everything was alright with him, after which he immediately hung up. There were also messages that the passengers of the Boeing were often met by their acquaintances, but the "resurrected" pretended that they were mistaken.

This means that the version of “knowledgeable sources” that, in fact, instead of the passenger Boeing, the American reconnaissance aircraft resembled it, has a right to exist. The liner was put on the American military base in Japan, and all passengers were given new identity cards and good monetary compensation, ordering to be silent. If so, then the Westerners are well aware that sooner or later the awl will come out of the bag, and then a huge scandal is inevitable. To avoid it, and fables about the "acting Gulag."

In favor of the fact that the incident with the "Boeing" was well-directed, they say a few other similar cases, dated the same year 1983.
The most resonant was the attempt on the South Korean dictator-president Chong Doo-hwan during his visit to Burma in early October, known in Japanese and South Korean sources as an “incident in the tomb of Aung San”. Let me briefly remind you: according to the protocol, Jong Doo-hwan was to visit a mausoleum in honor of the founder of independent Burma in the capital of this state. The president was late for an unclear reason, having sent his ambassador to this place in advance of the ceremony. However, the mausoleum had an explosion that killed about thirty people, including the deputy prime minister, foreign minister and energy minister. Judging by the photo taken a few minutes before the incident, representatives of the highest political establishment of South Korea, lining up in a line, were waiting for their boss.

After the incident, two alleged North Korean agents were caught by the Burmese military, who allegedly organized this terrorist act as part of a sabotage group. It seems that everything converges, up to material evidence, there are also captured performers. But why has nobody so far bothered to clearly explain Chon Doo-hwan's late arrival to the memorial cemetery, explain how North Korean agents could penetrate the tomb territory, which was guarded by about two hundred security officers of the South Korean president, not counting the Burmese security forces, and place two mines there tremendous explosive power. And why the North Korean merchant ship, from which the group of saboteurs allegedly landed, was from 4 to 11 of October in the port of Colombo, that is, far from the scene of the incident. And why would Chon Doo-hwan not remove from his posts either the head of the intelligence service or the head of his own security when he returned to Seoul. Yes, allegedly North Korean agents were caught, but who can guarantee that they are not South Korean intelligence officers who were given the task of posing as "brothers" from the North? However, so far no one has published photographs of these people. Yes, and there was no reason for the North Koreans to “run up” at the scandal that resulted in the rupture of diplomatic relations with Burma, a country whose trade was very profitable for both Pyongyang and Rangoon. Now, decades later, these two countries are again pulling each other, like magnets, on the basis of anti-Western sentiment. However, a year before the South Koreans claimed that they wanted to kill their leader - it is clear who is in Canada. This already seems like paranoia.

An even more mysterious incident occurred in August of the very same 1983, when the South Korean warship "Kanvon" allegedly sank a high-speed North Korean reconnaissance ship in the Sea of ​​Japan. More precisely, it was made by a helicopter that took off from the ship with the A-C-12 rocket, which, according to the South Koreans, is intended for firing at ground targets. Strangely enough, there is no more information about the successful use of "ECN-12" in the Sea of ​​Japan anywhere except in South Korean sources. Different versions of what happened. According to one of them, the South Koreans set foot on the deck of a wrecked ship, on the other - it just sank, and again not a single photo. But as a proof, a helicopter was put on display, whose fuselage was decorated with a badge of a destroyed enemy warship. "Weight" proof, of course.

I believe that in the case of the Boeing, the Americans were not only aiming to find out the details of the functioning of the Soviet air defense system, but also wanted to prevent a rapprochement between Seoul and Moscow.

The South Korean dictator General Pak Jong Hee (president of the country in 1963-1979) seems to be very upset with his total dependence on Washington. Therefore, as far as possible, he was looking for "ways out" to Moscow. One of the first signs is the gratitude of the Soviet leadership for the quick resolution of the issue with passengers and crew of the 902 flight, made, I note, in the conditions of the complete absence of diplomatic relations. This line was continued by the next military ruler, Chon Doo Hwane, then South Korean walkers who also had American or Japanese citizenship, after receiving a visa, visited our Foreign Ministry to persuade us to improve relations with Seoul. After the incident with the "Boeing" these visits to the Foreign Ministry ended, South Korea was swept by a wave of anti-Soviet hysteria ...

Ctrl Enter
Noticed oshЫbku Highlight text and press. Ctrl + Enter
We are
Riddles of the Great Mound (Part of 2)NATO losses in Yugoslavia
75 comments
Information
Dear reader, to leave comments on the publication, you must to register.