In a single plan 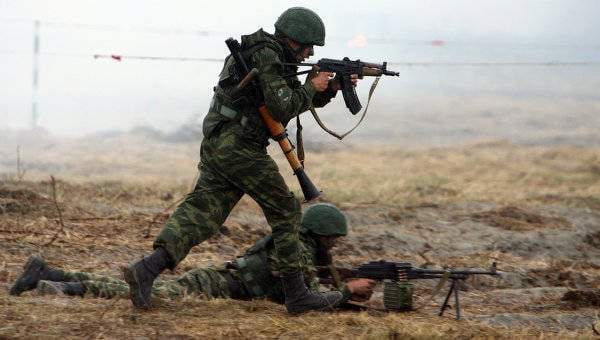 The West-2013 joint strategic exercise is defensive in nature and is aimed exclusively at strengthening regional security within the framework of the Union State of Russia and Belarus. This was announced at the press conference held in Minsk by the Minister of Defense of Belarus, Lieutenant-General Yuri Zhadobin.


The upcoming exercise, according to Lieutenant-General Yuri Zhadobin, is aimed at checking the functioning of the joint defense system of the Union State of Russia and Belarus, its ability to solve the tasks of ensuring national and regional security. The subject of "West-2013" involves the preparation and use of regional groupings of troops (forces) in the interests of ensuring the military security of the Union State.

“In the plan of the strategic doctrine, one of the possible variants of the occurrence of a crisis situation was used,” the Minister of Defense of Belarus emphasized. According to him, the plan of the exercise took into account modern approaches to the use of troops (forces) based on the experience of the armed conflicts of recent years, operational training activities, as well as the forms and methods of using the troops developed in the armed forces of the two states.

At the same time, he added that the opposing sides are conditionally located within the real borders of the republic and three regions of Russia adjacent to the west. The tactical episodes are based on various options for joint actions of the Belarusian and Russian military units that are part of the Belarusian-Russian regional grouping of troops (forces).

The situation in the exercise will be created in such a way as to practically use the maximum number of military command bodies. “Practical actions of military authorities and troops will be held at six test sites located on the territory of Belarus,” said Yuri Zhadobin. Among them are the Brest, Gozhsky, Osipovichsky, Obuz-Lesnovsky, Borisov and Domanovsky polygons, as well as the polygons on the territory of the Kaliningrad region of Russia, where the 103 units of the separate guard mobile brigade of the Republic of Belarus will also be involved.

During the active phase of the exercise, the actions of the troops will be aimed at covering the state border, maintaining the state of emergency in the border area. Along with this, regional groupings will have to wage a counter-sabotage struggle, to search for and block groups of militants and illegal armed formations in areas of responsibility.

An anti-air shield from the ground will cover command posts and important military installations. And the air cover will act in the interests of providing maneuver with forces and means of military units on the routes of advancement, as well as the protection of important military facilities. At the same time, tactical exercises will be held with units of rocket forces and artillery.

The total number of personnel who will take part in the exercises on the territory of Belarus will be about 12.900 troops. A group of just over 10 thousand fighters will be involved from the Belarusian armed forces. Whereas the Russian military contingent will be about 2,5 thousand. It is also planned to use about 350 units of armored vehicles, including about 70 tanks, over 50 artillery and multiple launch rocket systems. The air group created for the period of the training will consist of more than 50 aircraft and helicopters.

The upcoming doctrine, according to the Belarusian minister, will not only create conditions for a more effective provision of national security, independence and territorial integrity of the Republic of Belarus, but also “will allow in practice to test the joint use of defense infrastructure in the interests of both the Union State and other Collective Security Treaty.