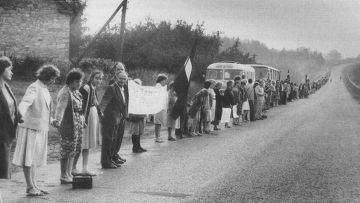 “For the Baltic states, unity is no longer filled with such euphoria as before, but it retains a common understanding, and one of its elements is a feeling of fear in connection with dependence on Russian energy sources. If we are unable to agree on the need to build a nuclear power plant or the Tallinn-Berlin railway line, then the unity that was 23 August 1989 of the year will remain only as a museum exhibit. The unity of the Baltic states must be proved by deeds! However, if there is a real threat to the security of states, then, I think, there will be unity, like at one time during the barricades. We are capable of that, ”says historian Ritvars Jansons.

The people of the Baltic countries were really able to join hands, both symbolically and realistically, on 23 August 1989, when the legendary Baltic Way action, included in the international register of the UNESCO World Memory program, took place.

The Baltic Way was a truly emotional event, analogs of which are difficult to find in the world stories. Approximately two million people joined hands on the 600 route, kilometers from Tallinn through Riga to Vilnius, in order to draw the world's attention to the dramatic events of history, as a result of which the Baltic countries suffered. The Baltic Way passed exactly 50 years after the signing of the Molotov-Ribbentrop Pact on August 23 on 1939, when the USSR and Germany separated the spheres of influence, deciding to subjugate and destroy the independent states.

The Baltic Way was an illustrative lesson in the unity of the three peoples and three states. An illustrative lesson of patriotism and faith, when everyone nurtured in themselves the conviction that the emotions encompassing the living chain, materialize into the reality of freedom. And there was also hope that the unity that prevailed on 23 in August of 1989 of the year will not end the next day, or a year later, nor after twenty years. However, it’s impossible to live all this time on the crest of a wave, and now the unity of the three Baltic countries seems to be only a made-up phenomenon, because each state has its own economic and political interests, whose spokespersons do not always look in the same direction. Rather, in the opposite. And, perhaps, only a common external threat can somehow re-unite the people of Latvia, Lithuania and Estonia, and besides, the union will not be expressed as emotionally as 22 a year ago - it will be more pragmatic and thoughtful action for a common goal.

You need to see what really happened during these 22 years.

At one time, at the end of 80, the common goal of the Baltic countries was to create a single market, at least 20 joint working groups on privatization, energy and other issues were formed. Cooperation agreements fell like a cornucopia. However, many ideas remained only at the level of ideas, and Lithuania was the first to declare that it would go its own way. Until now, there was even the thought of creating a union of the three Baltic states, but this idea also disappeared, because another goal was set - to join the European Union. The Baltic Free Trade Agreement was concluded, but each state was interested in protecting its market, so it managed not to comply with this agreement: dairy, pig and egg wars took place. The Latvians and the Lithuanians also conducted a war against the sea border dispute. Latvian fishermen have long held anger at their government, because of the indecisiveness of which the possibility of catching herring in the Baltic Sea has decreased.

There was also no cordial friendship with Estonia: out of the dozens of countries that applied for EU membership, Latvia was in last place in terms of the economic situation, and Estonia was ahead of everyone. Estonians did not really want to cooperate with the rest. But even in this situation there was a benefit: Estonia became a kind of example and a burden for the other two Baltic countries.

Of course, there were later general positive moments. Membership in both the EU and NATO united the three states into previously unprecedented cooperation. The Baltic Defense College was established in Tartu. BALTBAT was born in 1995, a military project of the three Baltic States with the aim of creating an international battalion that would be able to participate in peacekeeping operations. Since 1996, battalion soldiers have participated in peacekeeping missions in Yugoslavia and have been trained to carry out such missions elsewhere. Although the battalion reached a high level of military training, it was eliminated in 2000. This step was justified by the "reorganization of BALTBAT". The battalion was at one time created for the sake of common external, not internal interests, since integration into Western military structures was important because of an external threat, and for each country was important a contribution to security.

The military bias turned out to be one of the most important in the cooperation of the three countries, because it is directly connected with patriotism. “If the same thing happened today as it was at the end of 80, if there was something like Atmod now, unity would manifest. But for now, each state protects its economic interests, not paying much attention to the other partners. And yet the human desire to be together unites. Of course, the struggle against the common enemy is most of all uniting, and politicians are able to find it, this is an irrefutable truth. However, I do not think that the basis of the unity of the Baltic states and the Latvians themselves - patriotism - is over. It is in our genes, it only needs to be activated, ”says the scientist Ivars Kalvins, and what he said inspires a certain optimism.

At first, the three Baltic countries talked about the possibility of a common foreign policy, but this also turned out to be only talk. From the very beginning of the 90s, Latvia, in the eyes of both Lithuania and Estonia, is the weakest link in relations with Russia. It is possible to compare Estonia’s self-esteem and intelligent waiting for the solution of the border issue with Russia with slippery maneuvering of the holders of the Latvian authorities in conducting “negotiations” with Russian political blackmailers. President Vaira Vike-Freiberga behaved in the same way, traveling to Moscow on 9 in May 2005 of the year to participate in the celebrations on the occasion of the so-called Victory Day, while the presidents of Estonia and Lithuania refused to go to Moscow. Dr Vike-Freiberga, unlike the other two Baltic presidents, forgot that the victory of the USSR in World War II was a continuation of the enslavement and occupation of the Baltic countries. Equally impressive was the "unity" when Estonian President Toomas Hendrik Ilves suggested that the Baltic states together demand compensation from Russia for the damage caused during the Soviet occupation.

In 2007, when the so-called Bronze Alyosha, a monument to Soviet soldiers, was dismantled and relocated in Tallinn, a political scandal broke out between Estonia and Russia, the firewood of which was thrown not only by local Russian-speaking migrants, but also by Russian cyber gangs who committed an attack on the websites of state structures Estonia. At a time when the parliamentarians of Latvia had to stand up for Estonia, its political, economic and cyber security, our guys with their weak support delayed until it did not have any sense. Such a delay was obviously associated with the fear that “what will Russia say about this?” After these events, the so-called unity of the Baltic countries, which could already be considered a museum piece, was commented on by the British publication The Economist, noting that "a new cold war is raging between the West and Russia, in which the West is already losing in Latvia."

The former head of our state, Valdis Zatlers, put a fat point on the proposal for “unity” - he was the only one among the presidents of the Baltic states who didn’t fly to Tbilisi in August to express solidarity with the people of Georgia, who suffered heavily as a result of the Russian attack. The reason is very trivial: Mr. President needed to be at the Olympic Games in Beijing, which is Georgia ... At the same time, the presidents of Lithuania and Estonia, like the leaders of many other countries, did not attend the Olympic Games in Beijing, thus expressing solidarity with Tibet in his desire for independence.

Former Estonian Prime Minister Mart Laar said that only negative experiences are common to the Baltic countries. Toomas Hendrik Ilves, while still the foreign minister of Estonia, stated: “The identity of Estonia belongs to the circle of states that extends from Great Britain to Scandinavia, being isolated in Estonia.” As for the southern neighbors, Latvia once noticed the Lithuanian craving for Poland.

And yet I want to look at all this also in a positive light: if once there was cooperation, which was crowned with success, then unity is possible. In February 2011, Lithuanian President Dalia Grybauskaite confidently said in an interview with the newspaper Diena: “A natural process occurs in which this former unity is transformed into a new form. It is even impossible to preserve the unity of that time today, because at that time we were united by the threat of being destroyed, as well as the threat of economic blockade. Today our unity is more global, multilateral, we are united by the European Union and NATO. This is a more significant form of unity. ”

Currently, there is no active mention of unity and common goals from either Latvia, Lithuania or Estonia. And yet hope does not die. And the composer Imants Kalnins looks at them a little sentimentally and gloomily: “Today unity is something else. It is in power. Then, 23 August 1989, there was a real unity. What happened to people? Not with everyone, I can not say this. What have you done with unity? He is no more. You can blame those who were entrusted to keep unity. Nobody justified this trust. Yes, and I was among those to whom it was entrusted, but I really did not use power, because I was a member of parliament, and not a representative of the executive branch. But I do not take responsibility from myself. Is there any hope that unity will ever be restored? I think that yes: what would life be like if there were no hopes? ”

Ctrl Enter
Noticed oshЫbku Highlight text and press. Ctrl + Enter
We are
ARMY-2016. The only man-repair exhibitNATO Summit as a formal ritual (Neatkarigas Rita Avize, Latvia)
35 comments
Information
Dear reader, to leave comments on the publication, you must to register.