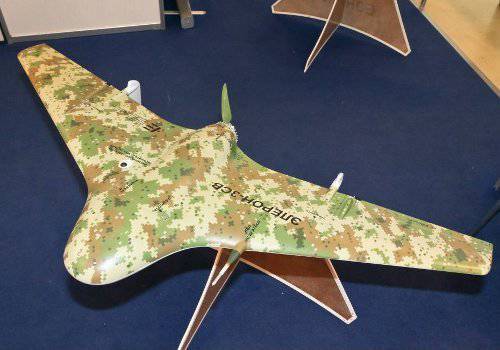 By the end of December, the Ministry of Defense and the Kazan Enix company intend to agree on the delivery of short-range reconnaissance unmanned aerial vehicles (UAVs) to the 34 military department as part of the Eleron-3SV complexes, said the director and chief designer of the enterprise Valery Pobezhimov.

“It is planned to conclude a contract for the supply of these complexes to the Ministry of Defense of the Russian Federation by the end of this year. Deliveries will start from the first quarter of 2014 of the year, ”he said at the MAKS-2013 aerospace show, noting that it was about delivering 17 complexes to the Aileron-3CB, which include the drone's 34, reports RIANews».

“This is a significantly modernized device, it only looks like those samples that were presented on previous MAX. The onboard equipment has been completely replaced in it, now it fully meets the requirements of the customer, ”the head of the company added. Pobezhimov noted that the state tests of the Eleron-3SV complex had been completed last year and the Russian Defense Ministry had already taken these drones for supply.

According to Pobezhimov, Eleron-3SV’s price is about five times lower than foreign counterparts of Zastava, which are manufactured in Russia under the contract concluded in 2010 between the Obron industry complex and the Israeli company Israel Aerospace Industries Ltd.

UAV "Eleron-3SV" - a special reconnaissance vehicle of short range. The development is adapted for the installation of a removable modular payload: a camera, a thermal imager in a hydro-stabilized mechanism, a video camera with a 10-fold increase in a hydro-stabilized mechanism, a thermal imager with a low-level camera and other payload. The maximum take-off weight of the device is 5,3 kilogram, the payload mass is up to one kilogram, this drone can reach speeds up to 130 kilometers per hour and is capable of rising to heights up to 4 thousand meters. "Aileron-3SV" is equipped with an electric motor, the dimensions of the machine - 1,47 per 0,635 meter.

Ctrl Enter
Noticed oshЫbku Highlight text and press. Ctrl + Enter
We are
Video recording of the flight of the Russian drone Eleron-3SV appeared on the Internet (video)Hopes for the anniversary MAKS
Military Reviewin Yandex News
Military Reviewin Google News
29 comments
Information
Dear reader, to leave comments on the publication, you must to register.