There is a people, there is no country 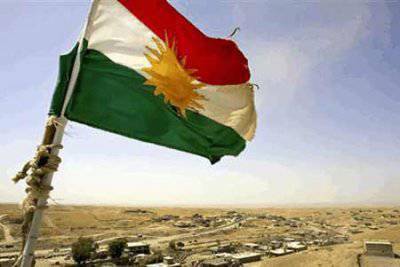 September 15 in Erbil, the capital of Iraqi Kurdistan, will begin a general three-day congress of Kurds. The most important question, which has long concerned all Kurds, will be put on the agenda: will they have their own state? The conference will bring together Kurds from Turkey, Iraq, Syria and Iran. As guests will be there and the Russian Kurds. The venue of the forum was not chosen by chance: it is in Iraq that the Kurds have maximum autonomy.


The press notes that in recent days thirty thousand Syrian Kurds have fled to Iraq, who fled from the civil war.

As noted by 9tv.co.il Referring to the news channel Jewish News One, thousands of people who inhabited Kurdish areas in northeastern Syria fled to Iraqi Kurdistan. According to the UN, this is one of the most massive influxes of refugees in the Kurdish areas of Iraq over the past two years.

The Kurds are fighting in Syria against Islamist groups: “Dzhebhat al-Nusra” and “Islamic State of Iraq and the Levant”. Previously, in the Syrian war, as you know, the Kurds were neutral. And now what is happening in Syrian Kurdistan is called the genocide of the Kurdish population. Some Kurds believe that the Assad regime contributes to the extermination of their jihadists. At least in this interview IA "REGNUM" told the Syrian Kurd and opposition leader Ali Abd Salam Mohammed, representing the "Party of Democratic Unity of Syria" in Russia.

To the question of a REGNUM correspondent about which forces in the Syrian opposition are the most effective, this person answered:

“I’ll say both Kurd and Kurdish public figure. In the Syrian opposition, the most organized force is now the Kurds. Thanks to their organization and solidarity, the Kurds of Syria were able to establish self-government in a number of their districts. The other part is the Jabhat al-Nusra group, or the Victory Front, as well as the Islamic State of Iraq and the Levant group. The third part is the “Free Syrian Army” (PAS), which is going through not the best of times. ”

Ali Abd Salam Mohammed believes that the Americans apply double standards to jabbahans. Officially, Washington declared the “Victory Front” a terrorist organization, but as soon as the “Front” began fighting in the territory of Syrian Kurdistan, the United States called the organization’s fighters not terrorists, but only “jihadists”, that is, the Syrian opposition jihad pledged to help.

“It turns out that in the US, a jebhatist is a terrorist, and if this terrorist is fighting in Syrian Kurdistan, then he is a Syrian Muslim who is fighting for his rights against the criminal regime of Bashar al-Assad, who is in alliance with the Kurds.”

Such a convenient classification, which allows playing with concepts at once, also suggests that the United States fears a Kurdish upturn in the Middle East. Ali Abd Salam Mohammed argues that America is afraid of the Kurds because “the Kurds raise their heads, not by their orders, but by their own will. This fact confuses the Americans with all the cards. ”

Jebhat activity in Syrian Kurdistan is also associated with the presence of oil there. This region is rich in oil, said the oppositionist. Now a part of the oil storage facilities is in the hands of the jabhat people.

“Few people know that the“ Victory Front ”sells“ its ”oil to the Bashar al-Assad regime, and the regime buys this oil. On the basis of oil, the interests of Dzhebkhat and the Free Syrian Army also clash. Recently in the province of Rakka about forty days were fighting. I will tell you one thing: among the militants of "Al-Nusra" in the area of ​​Raqqah, the people of Bashar al-Assad were noticed. These militants have admitted this themselves. "

As Olga Kuznetsova writes (Kommersant), at the national conference in Erbil, which will open on September 15, the agenda will be the question of how to get the Kurdish people to have their own state. And this forum takes on special significance in the light of recent events in Syria, where the Kurds were drawn into a war with radical Islamists fighting under the flags of Al-Qaeda.

“The Syrian war is not ours. Kurds were trying to draw into her under various pretexts. The so-called Syrian opposition repeatedly and unreasonably accused us of collaborating with the regime of Bashar al-Assad. But from the very beginning of the conflict, we declared neutrality, and now we are protecting ourselves from the attacks of Al-Qaida, ”said Ali Abd Salam Mohammed, mentioned above, to Kommersant.

This regional war in the war confirmed the Kurds in the idea of ​​expanding autonomy - up to its legislative consolidation. They propose, notes O. Kuznetsov, that in the new constitution of the country the rights of the Kurds should be clearly defined.

It is noteworthy that the plans of the Syrian Kurds did not meet with objections from Turkey. “The Turkish authorities are gradually moving away from the hard line against the Kurds. This is evident from the fact that they are trying to resolve the Kurdish issue in their own country, ”Farhat Patiyev, a member of the National Congress of Kurdistan, explained to Kommersant.

As for the Turkish Kurds, then, as stated "Herald of the Caucasus" Stanislav Ivanov, Senior Researcher at the Institute of Oriental Studies of the Russian Academy of Sciences, the settlement of the Turkish-Kurdish conflict can create a new model for the coexistence of Kurds with other nations.

Ivanov noted that against the background of the successful experience of the Iraqi Kurdish autonomy, Turkey creates its own model: a nation in which everyone has equal rights: “... so that they do not ask you on the street who you are, Kurd or Turks, so that you feel protected, independent, passport of the citizen of the country where you live. " In this case, the question of the desire to "separate" may disappear by itself. The expert said:

“Iraqi Kurds do not raise the issue of separation from Iraq. What for? They get oil revenues, they have their own budget, they have their own parliament, their own laws, their own constitution, their judicial authority, even their national armed forces, their police, conduct international activities, they have foreign representatives around 30 accredited - why should they separate ? In the new post-Saddam Iraq, they feel no worse than the Arabs, but somewhere even in terms of security and better. Therefore, if the same conditions are created in other countries with Kurdish minorities, then the question will automatically disappear. ”

Another point of view on the Kurdish question was voiced by Andrey Ivanov ("Free press"). In his opinion, the Middle East may expect a redistribution in the near future.

“The issue of creating a Kurdish state is relevant today as never before. This situation was created not by the Kurds, but by other powers that are interested in redrawing the borders in the region. In general, in the Middle East, state frontiers have changed many times. But there was no place for the Kurds, although it is a large nation.

Now Iraq can repeat the fate of Yugoslavia and break up into several parts. There, the Kurds have already received autonomy, and control the oil-bearing areas. Difficult situation in Syria, where the Kurds opposed the militants. Here they expect to get their own, bargaining with the government of Assad. It is extremely difficult in Turkey: the end of a long policy pursued since the days of Kemal Ataturk. Turkey tried to integrate into Europe, it spoiled relations with the Islamic world. But the West does not accept Turkey. Therefore, the country has a very difficult social situation. ”

The expert believes that the Kurdish issue is a question of destabilization of the situation in the region.

As for the planned Kurdish forum in Erbil, the leading researcher at the Center for the Study of the Near and Middle East, Vladimir Sotnikov, explained that quite a few conferences had already been held on the Kurdish issue. True, the Kurds have now come to the acquisition of statehood "as close as ever." At the same time, the construction of a state is a “not one day” question. Therefore, "it is unlikely that the issue will be resolved at the conference, even if it develops some new approaches and accepts some documents."

“It is interesting that today, geopolitically, the United States is beneficial for the Kurds to get some kind of statehood. For Americans, the Kurds are one of the keys to resolving the Syrian problem. The situation in Turkey depends on their position, that is, the Kurds can be used. The Iraqi leadership has important support for the Kurds in the fight against jihadists and other groups that are fighting against the government. But all this does not mean that the Kurds will get their state. "

Chairman of the International Union of Kurdish Public Associations Merab Shamoev said that representatives of Russian Kurds will participate in the conference as guests. By the way, in his opinion, the statehood of the Kurds "today looks like a utopia." As for the Russian Kurds and their support for the national self-determination of the Kurds in the Middle East, this is what Shamoev said:

“We are citizens of the Russian Federation, in all matters we support Russia, its leadership. On the other hand, we remember our roots and will support our compatriots in resolving the issue of national definition. ”

Also, the chairman of the International Union of Kurdish Public Associations noted that the Kurds "trust Russia, not the West."

Thus, against the background of events in Syria, where Kurds are forced to participate in “not theirs” war against Islamists, and against the background of reconciliation attempts of the Turkish government with their Kurds, a conference in Iraqi Kurdistan may in the future turn out to be a prologue to the creation of new Kurdish autonomies. As for the formation in the Middle East "in the near future" of an independent Kurdish state, the Kurds themselves do not see the prerequisites for this.

Observed and commented on Oleg Chuvakin
- especially for topwar.ru
Ctrl Enter
Noticed oshЫbku Highlight text and press. Ctrl + Enter
We are
Rozhava - the land of the Soviets. How do Syrian Kurds fight and build a new world?Syrian Kurdistan: Will there be peace and freedom?
Military Reviewin Yandex News
Military Reviewin Google News
27 comments
Information
Dear reader, to leave comments on the publication, you must to register.