The presence of oddities in the government program "Strengthening the unity of the Russian nation ..."

August 27 2013
67
Last week, the Russian government approved the Federal Target Program "Strengthening the unity of the Russian nation and the ethno-cultural development of the peoples of Russia", designed for the period up to 2020 year. This FTP, in turn, is the so-called program-target instrument (that’s, at least, its government determines) of the state program called “Regional Policy and Federal Relations”. 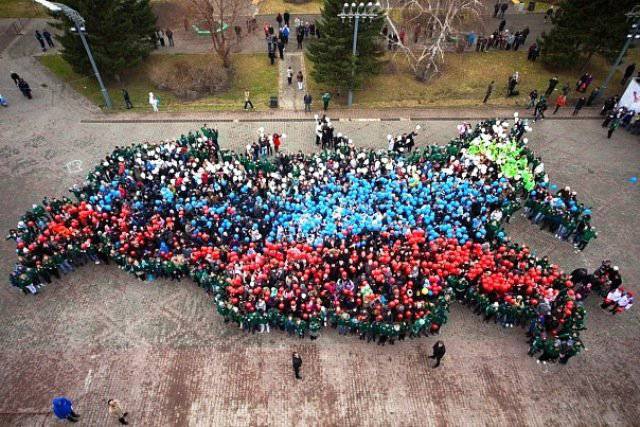 assistance in the formation of all-Russian civil patriotism and solidarity;

promotion of ethnocultural diversity and socio-economic development of the peoples of Russia;

promoting the harmonization of interethnic and ethnic and religious relations, as well as ensuring inter-ethnic peace and harmony.

The following are indicated as expected results of the program (materials are taken from the description of the FTP):

an increase in the share of Russian citizens who consider themselves Russians or who identify themselves as Russian nations - up to 74%;

an increase in the level of tolerance towards representatives of other nationalities - up to 85%;

an increase in the number of citizens who would positively characterize the state of interethnic relations in the Russian Federation - to 65%;

the implementation of those programs in the regions of the Russian Federation that would be aimed at harmonizing interethnic relations, as well as at strengthening civil unity throughout Russia.

The responsible executive of the program is the Ministry of Regional Development of the Russian Federation. And, in general, the Ministry of Regional Development would already have to start working in the designated areas of strengthening equality and fraternity, but when adopting the program, an important snag cleared up ... The fact is that when the implementation plan of the federal target program appeared, the initial financing of the project listed on several dozen pages of printed text, interspersed with very impressive formulas, amounted to 38,04 billion rubles. After the peculiar adjustments of the program, which the Russian cabinet of ministers conducted, it was decided to cut funding more than 5,5 times. The final funding of the program amounted to 6,76 billion rubles, of which two thirds will be allocated from the federal treasury, and the remaining third from regional and municipal budgets.

After a more than fivefold reduction in the level of funding for the program, the question arises: is the government going to refuse to implement the overwhelming majority of designated FTP points, or will it reduce the activity for each one by 5,5? In other words, is it possible that the birth of a document called “Strengthening the unity of the Russian nation and the ethno-cultural development of the peoples of Russia” is nothing more than the appearance of another paper with promising goals and objectives, even supported by a mathematical apparatus, but not supported by financial means and sometimes common sense ...

The mathematical apparatus, it must be admitted, is more than serious, and we must pay tribute to those gentlemen who were going on the basis of mathematical formulas to increase the number of citizens who believe that inter-ethnic conflicts do not manifest themselves at all in Russia.

For example, in the Ministry of Regional Development, according to the approved plan, should use the formula

with the help of which it is possible to “easily” determine the number of subjects of the Russian Federation implementing programs for the harmonization of interethnic relations (the formula is taken in the form in which it was published in the documentary draft of the program - author's note).

However, it must be admitted that even if the program were financed in the amount that was originally defined for it (more than 38 billion rubles), it would hardly have caused unequivocally approving reviews. The fact is that the expected results of the program raise certain questions. For example, what did the ideological inspirers of the program mean when they mentioned in the plans “an increase in the share of Russian citizens who consider themselves Russians or consider themselves to be a Russian nation”? If we analyze these plans, we get the following picture: if a Russian citizen, based on his ethnic roots, considers himself Russian or, for example, an Evenk, then it should be taken as a negative, against which the work of the program is directed. So, what? .. If so, then this is some kind of unsuccessful attempt to copy the Soviet experience of creating a state with a single Soviet people. Why unsuccessful? Yes, if only because any representative of the so-called Soviet people had a passport, which indicated his national identity, which he could rightly be proud of. Soviet citizen - Russian, Tatar, Azeri, Yakut, or no matter who is by nationality. And in fact, the indication of national identity in the passport did not warp anyone, and it did not hinder to profess the idea of ​​the friendship of nations. Yes, and why should warp? ..

Based on the letter of the new government program, it turns out that in Russia to call yourself a representative of any nationality, with the exception of the “nationality,” Russian is a moveton. What an oddity? .. Why under the guise of improving relations between the peoples of Russia at the government level to try to eliminate the diverse national composition of the country? By this, our government somehow clumsily tries to repeat not even the Soviet, but overseas experience, changing the rule “you live in the USA, which means that your nationality is American.” Really, in our Cabinet someone, having seen enough of the so-called exhibition clips about life in the States, seriously believes that in the USA such an approach led to the complete leveling of nationalistic manifestations ...

In order to transform Russian society into an objectively unified one, one should not try to artificially increase the number of those who are confident that interethnic tensions are over, but to make all citizens, without exception, equal before the law. Namely, everyone, and only after that, to speak about civil tolerance, and about interethnic peace, and about solidarity ... However, for some reason, the Federal Target Program does not have this item ... Apparently, the government has not got enough money to “level off” Russians enough. Or courage ... And if someone strives to be “more equal” than others, will the adopted FTP work? Again these rhetorical questions ...