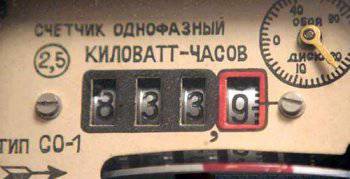 Among the videos on the Internet against the government, there is a special one. It does not contain any sedition, but only frames of the First Channel of different years: year after year, Putin speaks of the need to stop the unjustified growth of utility tariffs. Now his promises are especially relevant. The government releases the price of electricity for free floating, which has already risen in price 7,5 times in 12 years.


In the government, these words will certainly be called a lie if an important clarification is not made (important for the government, but not for the citizens). The state will release prices for those kilowatts that are consumed in excess of the “norm” that 1 will introduce in January 2014. In real life, the rate is 150-200 kW per person on average in Russia, but according to the government version it is 70 kW. These 70 kW will have a regulated price. The remaining kilowatts rise in price unpredictably - depending on the appetite of the monopolists.

But maybe kilowatts within the “social norm” will cost a penny? Dreaming. In the Krasnoyarsk Territory, where the “norm” has already been introduced on an experimental basis, one such kilowatt costs citizens in 1,28 rubles. Before the experiment, it was cheaper: 1,12 rub.
And that is not all. The average "norm" in 70 kW applies only to one inhabitant of an apartment. The second relies 50 kW, the third and fourth - from 10 to 30 kW. Such is the stimulation of fertility.

And even that is not all. In the "norm" is included not only the apartment electricity, but also general building: elevators and lights in the stairwell. “Unfortunately,” said government official A. Soldatov on television. This expressive “unfortunately” obviously means some kind of necessity that forces people to make sacrifices. What is the need? War time? The coming aggression of the Americans?

Speaking seriously, the cost per kilowatt is a penny. And this is not a figurative expression. She is 17,5 cop. Whereas, for example, Muscovites pay 4 rubles per kilowatt, that is, 22,8 times more than the cost. Navar power suppliers did not dream and drug dealers.

Initially, an experiment with the introduction of "social norms" was planned to be held in 16 regions, but in the end their number was reduced to seven. Loud history became a riot of Primorye. Governor of the region V. Miklushevsky declared: “Experiments should not be carried out on living people. Better on the officials. Let them experiment on themselves. ”

L. Talabayeva, secretary of the United Russia seaside political council, expressed a softer message: “People do not know whether this is good or bad, and they think it is bad. Therefore, I am very pleased with the decision of the governor to suspend the experiment. We should have information with which we will go to the people. Then people will understand what a social norm is. ”

In many settlements of Primorsky Krai there is no hot water supply, and residents are forced to use electric heaters. And from autumn to spring - also electric heaters, because the heating in many houses is very conditional. Accordingly, the “norm” in 70 kW for Primorye is laughter through tears.

V. Miklushevsky has not yet announced what number of kilowatts he will insist on. Only noted: “I submitted the issue for consideration by the expert council. We created a special working group, which included various public organizations and political parties. I decided to suspend the participation of Primorsky Krai in this experiment until the moment when the working group renders a final verdict and sends it to me. ”

It remains to hope that the verdict of the working group will be adequate. But in any case, Primorye will not save the whole of Russia. Each region will have to fight for themselves independently.

“Restrictions on 70 kW per person are simply insane,” commented G. Khovanskaya, Chairman of the State Duma Committee on Housing and Public Utilities (Fair Russia). - No family will meet this indicator, even with savings. In Europe and the United States, electricity consumption is two to three times more than the average for Russia. This is the very parameter that, it would seem, in Russia it is necessary to raise, not lower. If we are to lower something, then water consumption, because with it we have overlap in the other direction. ”

How to prevent the intentions of the government - the deputy does not know. “The initiative will go not through our committee, but through the energy committee. Or maybe the State Duma is not involved at all, limiting itself to a government decree, explains G. Khovanskaya. - I must say, the position of the chairman of the committee does not particularly help me influence the processes. She could help if the majority of the committee were my supporters. And so - an absolute blockade.

It's amazing that I sometimes even manage to do something (through appeals to the prime minister and the president). ”

“The crooks who appropriated the electric power industry due to Chubais privatization are moving to a new stage of robbing people,” said Yabloko’s leader S. Mitrokhin. - Until now, the authorities have found a "middle ground" for themselves: they humiliated the people just to the extent that they did not rebel. In this case, she plays with fire. Maybe she specifically wants to provoke the people into an unlawful uprising, in order to finally establish a dictatorship as a result of the suppression. ”