Anatoly Serdyukov furniture did not disappoint

August 20 2013
197
The first pancake is lumpy. The old adage has worked one hundred percent in relation to the former defense minister, Anatoly Serdyukov, who remained with his free status as a witness in the case of large-scale embezzlement in the Ministry of Defense. 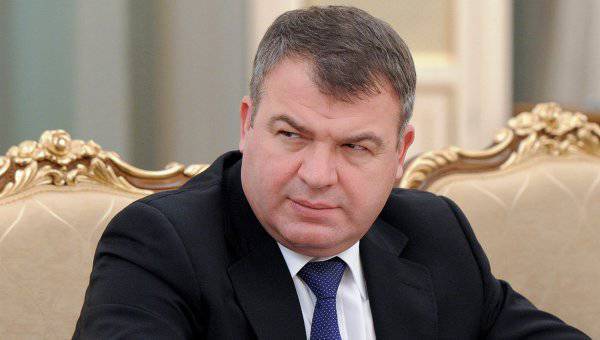 But Anatoly Eduardovich, the Main Military Prosecutor's Office (GVP) has already decided to give a completely different status, submitting documents to the Main Military Investigation Department of the Investigative Committee on the need to initiate a criminal case against him under three articles of the Criminal Code of the Russian Federation. Representatives of GVSU TFR "carefully" studied the documents submitted and found that all the accusations of Mr. Serdyukov and one of the representatives of his vast women's battalion (Catherine Priezzheva) are absolutely groundless, and that Anatoly Eduardovich is still crystal clear as the tears of virgins.

The essence of the criminal claims that the officers of the Main Military Prosecutor’s Office tried to put forward in relation to Serdyukov and Vasilyeva were as follows. The Krasnodar Presidential Cadet School once needed furniture (hmm ... furniture ...) In order to decide on a company that would receive the right to furniture supplies to KPKU, it was necessary to arrange an auction according to all the rules. Reluctantly, they arranged an auction, but only Yekaterina Gennadyevna Priezzheva, who at one time worked under Anatoly Serdyukov in the tax inspection of St. Petersburg, did not like the results, and at the time of the auction headed the educational department of the Ministry of Defense. Why didn't you like it? .. Yes, because Deacon celebrated the victory in the auction, which took on the obligation to staff the KPKU with quality furniture at fairly reasonable prices, and Isku Interior M, whose owner was a close friend of Mrs. Priezzhevoy, had more than Impressive prices for furniture was in the span. The amount of the contract with Deacon LLC was 124 million rubles, while Isku Interior M requested over 160 million for its services.

According to the laws of a sober market, everything was fine: the auction is won by the company that supplies quality goods at the lowest price. But this is one thing - in the conditions of a sober market, and another, when gentlemen, whose appetites are immensely large, feel full-fledged owners in the market.

In general, Ms. Priezheva, realizing that the big jackpot could pass by her and her friends from Isku Interior M, decided to use a real administrative resource, canceling the auction results in favor of Isku. In order for everything to look digestible, Ekaterina Gennadyevna also had to turn to her then-chief, Mr. Serdyukov. And she turned. They say that this situation is Anatoly Eduardovich: we urgently need to take "a little more than" one and a half hundred million rubles from the charity fund of the Ministry of Defense so that Krasnodar cadets would not experience problems with furniture. As soon as the minister heard the word the familiar word “furniture,” immediately all possible questions in the style “why from a charitable foundation?” And “why more than under the terms of the auction?” He disappeared, and Priezhev already, without further ado, The new auction, so much so that it was able to get to the desired result, one single company - the very “Isku Interior M”, the owner of which Alla Wikstrem was on friendly terms with Ekaterina Gennadievna.

As a result, Mrs. Vicstrom’s firm was able to deliver furniture to the KPKU at a price that is a third higher than what Deacon had requested. Now everything is all right, everything is as it should be, Pryezhev and Serdyukov considered, on which they calmed down. You can, of course, talk for a long time about the fact that acquaintance with Vikstrem is just a coincidence, and that neither Priezhev, nor Serdyukov “didn’t have anything” from this deal, but is that really the case. The main thing is that the head of one of the departments and the head of the Ministry of Defense, in no case, squandered several tens of millions of rubles from a charitable foundation, and with a clear abuse of their official powers.

Having familiarized themselves with the materials of the Main Military Prosecutor's Office, the representatives of the Main Armed Forces Central Committee of the TFR grabbed their heads: Mother of God, they cried. 10 yo !!! Yes, we will be suspended for some bodies for this ... It became a pity for our bodies, and therefore we decided that the actions of citizen Priezhevoy and citizen Serdyukov did not contain a crime. That is, they decided to come forward with reinsurance and not even bring the case to court, so that some “confused” judge would not suddenly solder Anatoly Eduardovich and Ekaterina Gennadievna for the most “not indulge” in natural naivety ...

Interestingly, what did the representatives of the FSB, who, judging by the information posted by a number of news agencies, participated in the case, said to the GVSU TFR decision? Surely and calmed down: they say, well, not brought, and thank God ... But why not. Bodies because it is a pity to all, not only the staff of the GVSU.

The only person who is not going to calm down today is the deputy head of Deacon LLC, who initially won the right to supply furniture to the Kuban. Roman Fedosov, namely the name of this person, said that the case file did not take into account concrete evidence, and even sent the appropriate letters to such addressees as Yuri Chaika, Sergey Shoigu and Vladimir Putin.

Eh, Fedosov, Fedosov, look, otherwise, in the end, everything can turn out so that it is you who misinformed the crystal-clear staff of the Ministry of Defense of the Russian Federation with their low prices for furniture, thereby putting the Krasnodar cadets on the brink of survival ineligible conditions ...

By the way, in the TFR, the refusal to initiate criminal proceedings against the persons mentioned is not commented. Yes, and they need it at all - to comment on such “trifles” ... There are more important things to do.