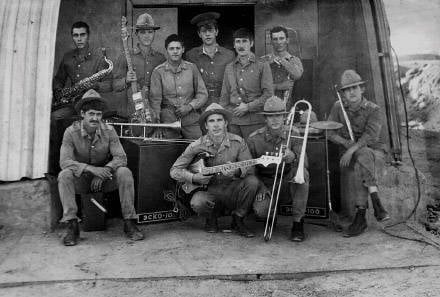 There is a special page in the song record of the Afghan war, connected with the work of vocal and instrumental groups. The names of some of them: "Cascade", "Blue Berets" - is still widely known. These groups, retaining their originality and repertoire, exist and successfully continue their concert activity, perhaps not knowing that the first instrumental arrangements of the songs loved by the “Afghans” exactly 30 years ago were created and recorded by the “Tankist” group in Bagram .


Its backbone is the orchestra of the 177 th Dvinsky motorized rifle regiment stationed in Jabal-Ussaraj, on the basis of which already, at the very beginning of the Afghan epic, a real concert brigade was formed: while the musicians smoked or repaired the equipment Warrant Officer famously showed tricks, scenes on the theme of “shuravi in ​​the dukan (Afghan shop)” were launched ... At that time the senior lieutenant (later captain) Alexander Malyutin led the orchestra. 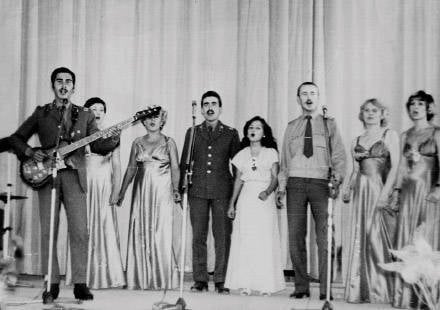 In March-April, the 1982 group was split in two. There was the will of the order: now Alexander Malyutin was instructed to form his orchestra at the 108 Division, in Bagram, in the division ... They divided the already poor regimental set of instruments in half with the help of equipment from other parts. The orchestra had enough work in Bagram, moreover, it was sometimes necessary to take the rap (in the sense of playing) for separate battalions and regiments. Rehearsals and work in the VIA - above the norm. At the same time nobody canceled outfits, military guard and political training for musicians - the service went on as usual ... However, they did not grumble. For the participants of the ensemble, as well as for their listeners - the same soldiers, the concerts were a real outlet.

As usual, the performances of the soon-established Bagram brigade of amateur artists, which included the initially unnamed vocal and instrumental ensemble, began with solemn greetings and bravura Soviet songs. But in the second, “informal” department, in addition to “Dance on the Drum” and the ceremonial-sweeping “Ata-Baty”, there appeared already then “obligatory” - “We went today Tanks"Brought to the repertoire by the captain of the Order of the Red Star, Captain Viktor Andreev from the sapper battalion. Soon a full-time name came up: VIA “Tankist”, and by New Year's Eve original equipment appeared - tank overalls - a gift from Colonel Kandalin’s division headquarters (until Afghanistan he commanded a tank regiment in Kushka), under which were visible white shirts and black ties borrowed from according to knowledgeable people, from the warehouses ... of the morgue ... 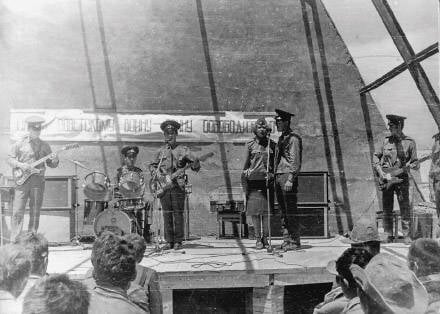 It is amazing how enough time was available for this in a combat situation, but Gennady Ivanovich Kandalin not only initiated the creation of the ensemble, he also personally supervised the entire visiting concert brigade, listened to each "artist" or ... "artist". After all, the girls gave the special flavor to the concerts - being the salespeople of Voentorg, nurses, cooks, vocal beauties during the hours off from service shared with the musicians rehearsals and trips, not at all safe flights to distant points ... Nevertheless, their scenic image was always flawless : from hair to nail tips. Themselves got out, invented and sewed concert dresses - with patterns helped one of the orchestra-overrunk members - Yevgeny Dzyubenko. Himself had to put dances and other mass numbers. All amateur artists sincerely sought to ensure that every concert was bright and memorable.

“I read poems, I was a soloist, and I also prepared scripts for the days of Victory, the Soviet army. I had to sit in the library to pick up the necessary poems, to edit documentaries ... "- recalls one of the amateur groups Alfiya Kagarmanova (now Petrov), at that time the proofreader of the divisional newspaper" Leninsky Znamya "and a member of a special team working with the local population.

In the "staff" of the concert brigade there were even ... tightrope walkers. The circus brothers were specially sent home on a business trip, so that on their way back to Afgan they grabbed costumes for performances, maces and poles ...

Soon, despite the fact that ensembles and singers from the Union were already touring actively in Afghanistan, the amateur group of the 108 Motorized Rifle Division became a welcome guest in the units and garrisons of the Limited contingent. With rare exceptions, songs about the service “behind the river” were strictly forbidden to perform from the stage at official events. 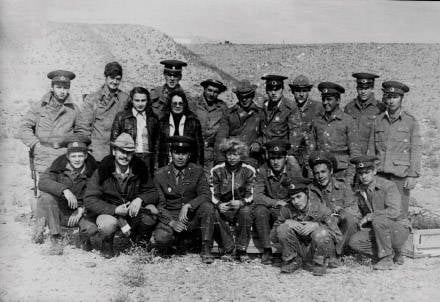 The idea of ​​arranging and recording in instrumental accompaniment your favorite “Afghan” folklore, carefully preserved in various kinds of notebooks, leaves, or even simply restored from memory, captured the team in the summer of 1982. The guys from the third company of the intelligence service, who was lodging next to the musicians' tent, supplied them with a cassette with separate sizzling and creaking recordings. It is now known that on that tape was the voice of Yuri Kirsanov, an officer of the state security organs, the author and performer of a huge number of early “Afghan” hits.

The Kometa tape recorder from the garrison club and the equipment assembled by the whole world (six-input pilotek, a column from the Doina amplifier instead of a monitor) are all the “equipment” of an improvised studio located right in the tent.

“They wrote 1982 / 83 of the year in the winter, spreading the beds under the drums, pulling the droning gasoline engine a hundred meters away from the tent ... The text was often read along the way - pushing foreheads over a notebook with beaded handwriting, which in some places on the records contain“ lacunae ”( words omissions), says Igor Fusta, a participant in those events. In total there were five of them - the guys who played and sang on one side of a five hundred-meter-long reel eighteen who later became cult songs: from “Kukushka” and “Kabul Far” to “Sinevy”, recorded by special order of the scouts.

Drums - Igor Kovrigin (Karelia), keyboards - Alexey Belkov (Moscow), solo guitar - Vladimir Andreev (Kherson), rhythm guitar, vocals - Mikhail Tikhonov (Zagorsk), bass guitar - Igor Fushta (Kharkov). In the spring of 1983, most of them went to the demob. It was incredibly difficult for soldiers to take a reel with "seditious" songs into the Union. The conscripts seriously “cleaned” at the customs, selecting Afghan records and photographs. A woman from Belarus agreed to help. After some time, she sent a bundle with the things transferred to her to Igor’s home address, in which there was also a cherished film ... 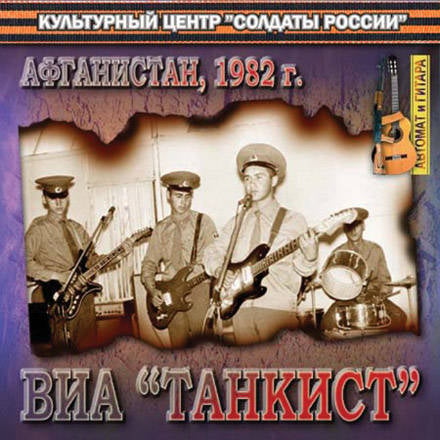 However, cassette copies were also made in Afghanistan from the “master reel”, and the word “Cascade”, which someone wrote with a ballpoint pen on the box of one of these audio cassettes with recordings, became symbolic. The new ensemble, already with a new composition, recruited by military conductor Andrei Sukhov who arrived in April of the same year, 1983 of the year, and continued the repertoire of Tankista, received exactly this name ...

Ctrl Enter
Noticed a mistake Highlight text and press. Ctrl + Enter
We are
004 "Count" ordered ...Captain Korolev's last fight
13 comments
Information
Dear reader, to leave comments on the publication, you must to register.