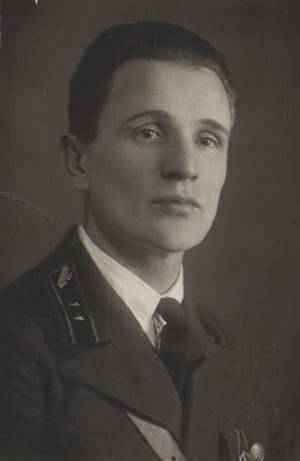 Zinovy ​​Kolobanov on the eve of the Winter War, in which he fought with the rank of lieutenant and fought as commander of a tank company of the 1 th light tank brigade.

8 August 1941, von Leeb’s troops, which had been trampled near the Luga line for almost a month, resumed the attack on Leningrad. 9 August 1941 of the year 1-I tank division was able to break through the Soviet defense, and, going to the rear of the Soviet troops, to unite with the 6-th tank division. 14 August 1941, the German troops cut the railway Krasnogvardeisk - Kingisepp, 16 August 1941 took the Volosovo station and rapidly moved to Krasnogvardeysk - the former and current Gatchina.

Our troops defending the line on the Luga River (70-I, 111-I, 177-I, 235-I infantry divisions, as well as 1-I and 3-I divisions of the militia), were cut off from the main forces and resisted stubbornly surrounded. The reserves sent from the deep rear have not yet come, and the road to Leningrad was open to the Germans who had broken through.

The only compound capable of delaying the German offensive was the 1-I tank division of Major General Baranov. On August 12 the division passed to defense in the area of ​​Vypolzovo, Kryakovo, Nerevitsy, Lelino. At this point, the division consisted of 58 operational tanks, of which 4 were medium T-28 T-28 - tank cruiser, and 7 - heavy KV-1. The 3 Tank Company of the 1 Tank Battalion of the 1 Tank Regiment of this division consisted of five KV tanks. This company was commanded by senior lieutenant Zinovy ​​Grigorievich Kolobanov. 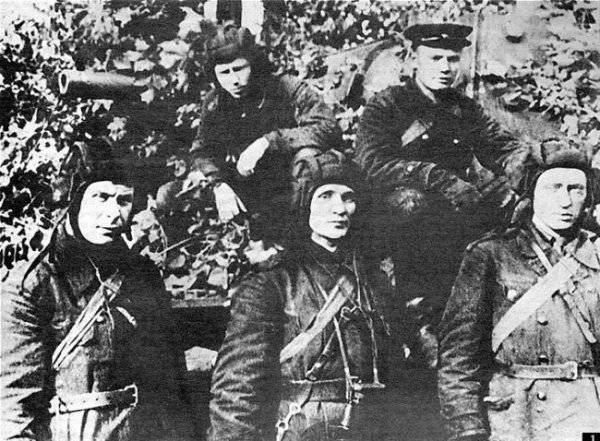 19 August Kolobanov was summoned to the division commander. Showing on the map three roads leading to Krasnogvardeisk from Luga, Volosovo and Kingisepp, the general ordered to block them.

Two tankloads of armor-piercing shells were loaded into each tank. High-explosive shells this time the crews took the minimum amount. The main thing was not to miss the German tanks.

On the same day, Kolobanov pushed his company towards the advancing enemy. Two tanks - Lieutenant Sergeev and Junior Lieutenant Evdokimenko, he sent to the Ludskoye road.

Two more KVs under the command of Lieutenant Lastochkin and Junior Lieutenant Degtyar went to defend the road leading to Volosovo. The tank of the company commander himself was to be ambushed along the road connecting the Tallinn highway with the road to Marienburg - the northern outskirts of Krasnogvardeisk.

For his KV Kolobanov defined the position so that in the sector of fire was the longest, well-open stretch of road. A little before reaching Uchkhoz's chicken farm, she turned almost 90 degrees and then went to Marienburg. Extensive swamps stretched along the sides of the road.

By evening, they managed to hide the tank in a caponier, which was open to the very tower. A spare position was also equipped. After that, they carefully masked not only the tank itself, but even traces of its tracks.

Closer to the night came the military guard. A young lieutenant reported to Kolobanov. He ordered the infantrymen to be placed behind the tank, to the side, so that if something happened they would not fall under gun fire. 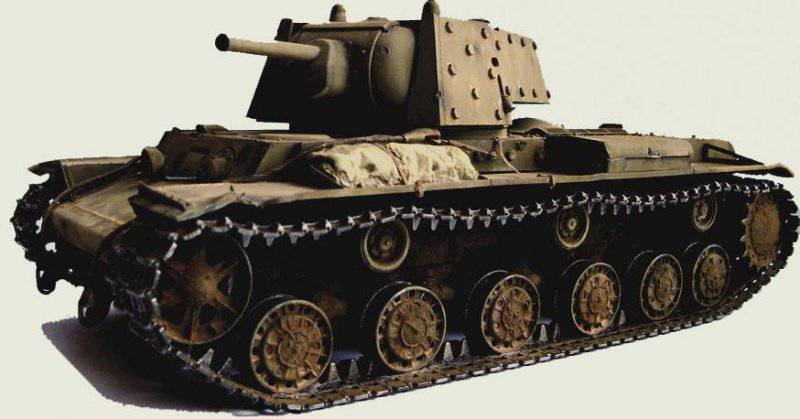 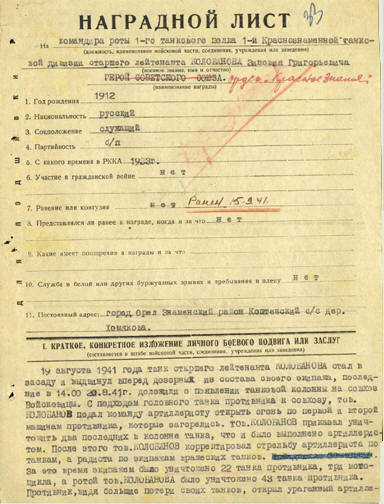 Early in the morning of August 20 1941, the crew of Kolobanov was awakened by the roar of the German Ju-88 bombers going at high altitude towards Leningrad. At about ten, shots rang out to the left, from the side of the road going to Volosovo. A message arrived on the radio that one of the crews had fought with German tanks. Kolobanov summoned the commander of the military guard and ordered him that his infantrymen opened fire on the enemy only when the KV gun was spoken. Kolobanov and Usov set two guidelines for themselves: No. 1 - two birch trees at the end of the intersection and No. 2 - the intersection itself. Landmarks were chosen so as to destroy the enemy's head tanks right at the intersection, do not let the rest of the vehicles turn off the road leading to Marienburg.

Only in the second hour of the day did enemy vehicles appear on the road. German motorcyclists turned left and rushed towards Marienburg, not noticing the disguised HF in ambush.

The lead tank caught fire from the first shot. It was destroyed, not even having time to completely pass the intersection. The second shot, right at the intersection, was defeated by the second tank. Cork formed. The column shrank like a spring, and now the intervals between the remaining tanks have become minimal. Kolobanov ordered to transfer the fire to the tail of the column in order to finally lock it on the road. The senior sergeant corrected the scope and fired four more shots, destroying the last two in the tank column. The enemy was trapped.

In the first seconds, the Germans could not determine where the shooting was going on, and they opened fire from their KwK-50 38 millimeter cannons at the hay bales, which immediately caught fire. But soon they came to their senses and were able to detect an ambush. A tank duel of one KV against eighteen German tanks began. A whole hail of armor-piercing shells hit Kolobanov’s car. One by one they plowed through the 25-mm armor of additional screens mounted on the HF turret. Tanks KV-1 with similar booking were produced only in July 1941, and fought only on the North-West and Leningrad fronts.

The infantry units following the column came to the aid of the German tank crews. Under cover of fire from tank guns, for more affective shooting at HF, the Germans rolled anti-tank guns onto the road.

Kolobanov noticed the preparations of the enemy and ordered Usov to hit high-explosive fragmentation projectile on anti-tank guns. With the German infantry, the military guard, who was behind KV, entered the battle.

Usov managed to destroy one VET together with the calculation, but the second managed to make several shots. One of them broke the panoramic periscope, from which Kolobanov watched the battlefield, and the other, striking the tower, jammed it. Usov managed to break this gun, but the HF lost the ability to maneuver the fire. Large dovoroty guns to the right and left could now be done only by turning the entire hull of the tank.

Kolobanov ordered the foreman mechanic, Senior Nikolai Nikiforov, to withdraw the tank from the caponier and take a spare firing position. In the eyes of the Germans, the tank backed out of his hiding place, drove off to the side, stood in the bushes and re-opened fire on the column. At this time, the radio operator Nikolai Kiselkov climbed onto the armor and installed a spare instead of the damaged periscope.
Finally, the last 22 tank was destroyed.

During the battle, which lasted more than an hour, senior sergeant Usov fired 98 shells on tanks and anti-tank weapons of the enemy, all of which were armored-piercing. By order of the battalion commander Captain Iosif Shpiller, Kolobanov’s tank was removed from the position and, putting the escort platoon on the armor of the surviving fighters, withdrew to the location of the main forces of the division. At the same time, eight German tanks were destroyed by the crew of Lieutenant Fyodor Sergeev in a battle on the Luga road, and five by the crew of Junior Lieutenant Maxim Evdokimenko. The junior lieutenant was killed in this battle, three members of his crew were injured. Survived only mechanic driver Sidikov. The fifth German tank, destroyed by the crew in this battle, was precisely the driver’s account: Sidikov rammed him. The HF itself was thus disabled. The tanks of Junior Lieutenant Degtyar and Lieutenant Lastochkina that day burned four enemy tanks each. Total 3-th tank company on this day was destroyed 43 enemy tank.

The troop battle seriously delayed the offensive of the enemy near Leningrad and saved the city from lightning capture. By the way, one of the reasons why the Germans were so eager to seize Leningrad in the summer of 41 was the fact that the city had a Kirov factory that produced KV tanks. 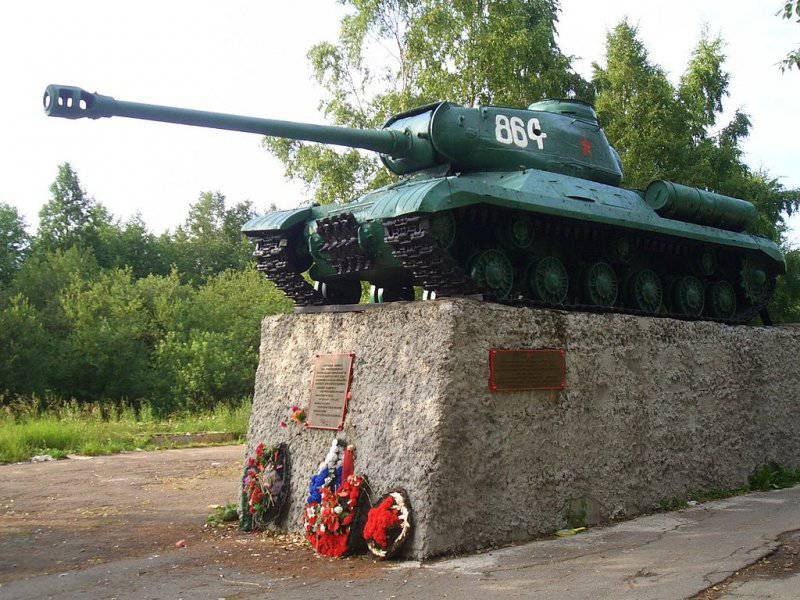 EC-2, installed on the site of the Army Troops battlefield
And this is how the events are described in the video:

Ctrl Enter
Noticed oshЫbku Highlight text and press. Ctrl + Enter
We are
Battle of tankman Kolobanova, made historyA hero who has not become a hero. Tank KV at the beginning of the Great Patriotic
Military Reviewin Yandex News
Military Reviewin Google News
61 comment
Information
Dear reader, to leave comments on the publication, you must sign in.