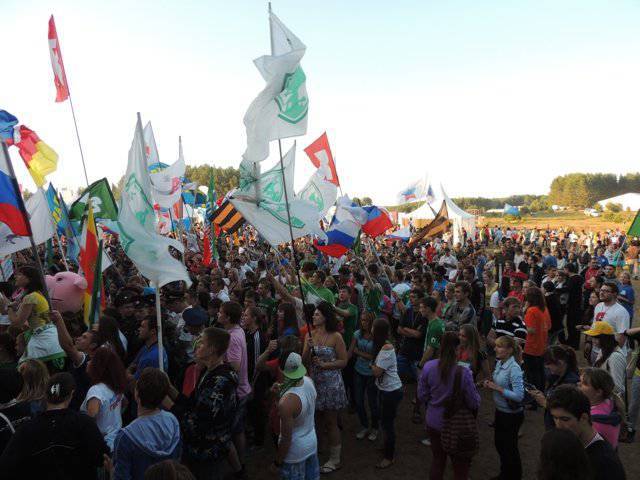 Activists of the National Liberation Movement came to Seliger from special missions, to tell active, thinking young people who had gathered from all over the country. TRUTH. The truth about the true state of things, the truth about the colonial status of our Motherland, the fate that befell it after 1991, and the struggle for Freedom and Independence that unfolded after 1999, under the leadership of National Leader Vladimir Putin.

And we 18 patriots managed to do this, managed to convey information to the 5000 participants in the Forum, almost everywhere we met with approval and understanding, many have already heard about NOD, even more young people learned about the facts of the occupation, and now their knowledge merged into one, all fell into place.

Here at Seliger, among huge pines, among lake spills, we once again understood the importance of our struggle for independence. We are confident that after returning home, many will join the struggle of the national liberation movement in Russia, the movement aimed at life itself in our land! 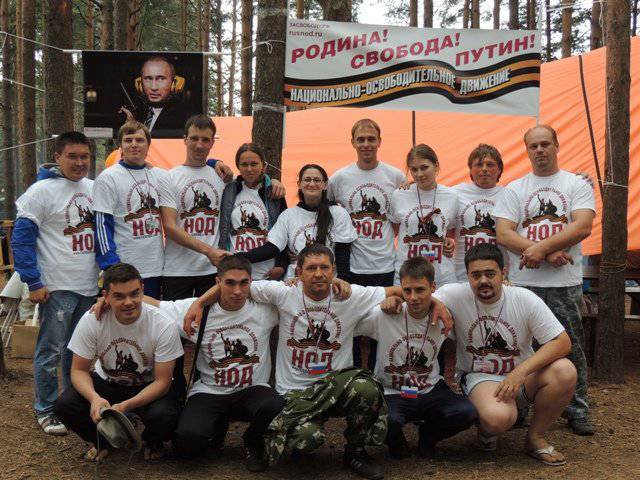 From the very first minutes of their arrival at Seliger, our comrades-in-arms faced difficulties that were a hindrance to our work at Seliger. And the task was one - to break through the information blockade. It began with the fact that the arrangements for our placement by a separate group, as well as issues related to the movement in the forum in practice, were not implemented. But the NOD fighters did not fall down in spirit and we made a willful decision not to be populated until all of our comrades came to be the whole group in the same tent camp. The fact is that our delegation arrived from different cities and at different times, and according to the rules of the form, the settlement is carried out on twenty people in one camp. At our requests to provide us with a camp and instructor, we were told that until the G20 was formed our request would not be satisfied. As a result, we had to spend a whole day at the checkpoint - 1, without being able to even eat. In the evening, 16 people gathered, we explained that the rest will be tomorrow, then we were only settled in the camp and given food. The day passed in the struggle for the possibility of our group settling in one camp in order to act in concert and it must be said that we achieved our goal. Then there was the struggle for the right to attend lectures in order to be able to more effectively conduct propaganda among young people. We were categorically not allowed, but without such a right, we were forced by the whole group to go to one lecture, and dozens of them were simultaneously held at the forum, respectively, this seriously reduced our capabilities. As a result of the persistence of our associates, we succeeded in obtaining permission to attend lectures freely. Every evening on the main stage, various projects had the opportunity to speak, but this did not concern the GCD. We have always received a refusal to our repeated requests, but other youth projects could calmly conduct propaganda for an audience of more than 5 000 people. We had to do this, bypassing the fires in the evening, as well as at lectures, asking questions on the subject of the GCD. 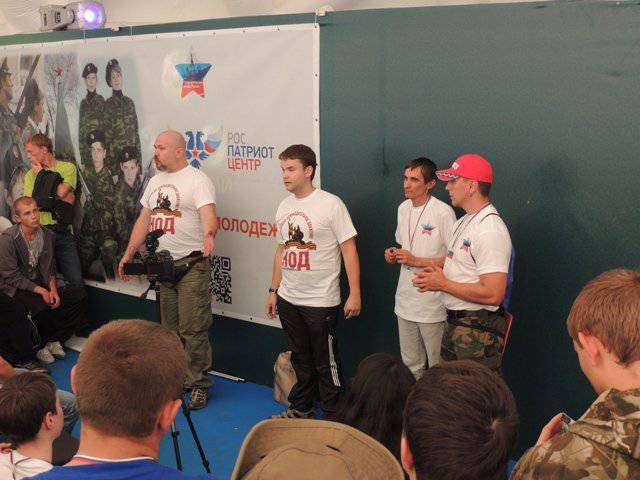 At the end of the lecture, our associates highlighted the problems of sovereignty of Russia. And the lecturers, with their answers, convinced the audience that there really are such problems. Our activists always moved around the camp in T-shirts with the symbol of NOD, which attracted the interest of members of the forum who asked to tell about the NOD that our colleagues willingly did, supplying members of the forum with propaganda materials.

The movement of our group through the camp to the morning and evening building was certainly accompanied by the slogan: "HOMELAND! FREEDOM! PUTIN!", Which rather quickly began to gain popularity at Seliger. It is pleasant to note that our words found a lively response in the hearts of people. NOD activists found friends and like-minded people, not only from Russia, but also from Serbia and Transnistria. The day before the arrival of the State Duma deputy, chairman of the inter-factional group of deputies of the State Duma “Russian Sovereignty”, Yevgeny Alekseevich Fedorov, our associates to ensure the maximum number of listeners, all evening they went on fires and told about the upcoming event. And even despite the fact that the lecture venue was changed twice, and ten minutes before it began, it was once again transferred from the tent “Stolypin” to the tent “Rostelecom”, our associates managed to gather a large number of listeners to the lecture. The speech of the deputy Fedorov E. A. made a real stir on the forum! The conversation turned out to be very lively and interesting, and the number of questions was so great that there was not enough time to satisfy everyone with an answer. At the lectures of Alexander Andreyevich Prokhanov and Andrei Ilyich Fursov, our activists also asked the question: “Does Russia have sovereignty?”, The writer Prokhanov replied, “there is partly, we can say that there is almost no such thing”. Fursov gave the same answer, he said that Russia has no more than 10 percent of sovereignty from the required level. Andrei Ilyich also acknowledged that Russia was under occupation, thanked the activists of the national liberation movement and expressed support. These lectures contributed to the breakthrough of the information blockade on Seliger, as they confirmed the words of our activists and a large number of forum participants began to express their support to our activists and ask for campaign materials. In the evening, our activists participated in debates with representatives of the Young Guard and patriotic organizations. During the debates, our comrades also spoke about the problems of Russia's sovereignty. 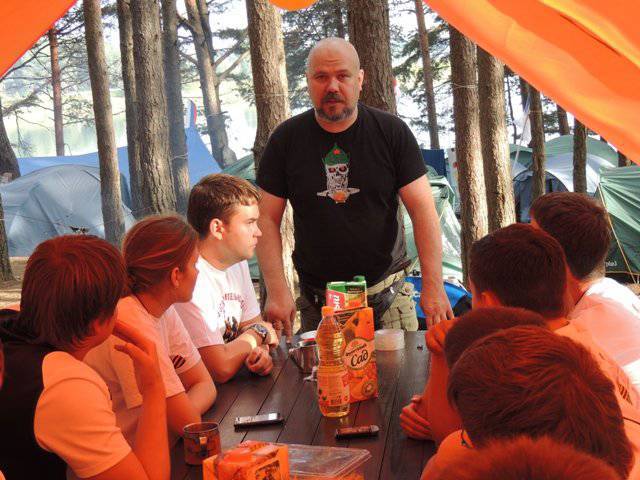 Our vigorous activity and constant requests for the need to perform in front of all Seliger on the big stage, led to the fact that the shift manager: “Working youth” Igor Gribanov helped us to resolve this issue. On the big stage before the audience of several thousand people were our comrades-in-arms: Denis Ganich and Aminat Anchokova, who presented the video of the national liberation movement and invited everyone to our lectures to the tent. As for the lectures, they turned out to be lively. We were joined by dozens of active young people who are raiding for their Fatherland and wanting to fight for its independence!

The task set for us - the breakthrough of the information blockade, we have completed. This is evidenced by the facts.

After some time, at all events, the forum users, asking questions to the lecturers, raised the subject of sovereignty. Not indifferent participants of the forum started to enter the tent of NOD, asking for information about the possibility of using their own forces in the struggle for the sovereignty of our Motherland! The activists of the national liberation movement, who were recognized by T-shirts, could not walk through the camp, so that caring young people would not come up and did not ask questions about the GCD.

When the national leader, Vladimir Putin, arrived at Seliger and our activists began chanting before the start of his speech: “Motherland! Freedom! Putin! ”, This slogan was picked up by the members of the forum who, during our work, began to understand the essence of the events taking place in the country. 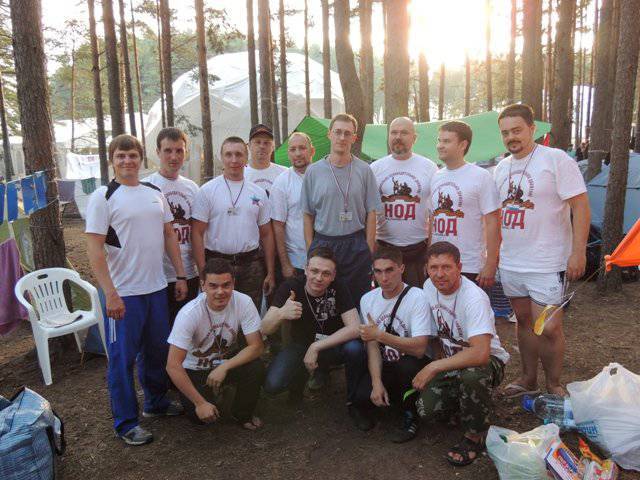 Ctrl Enter
Noticed oshЫbku Highlight text and press. Ctrl + Enter
We are
About Stalin and KhrushchevWe have a cold occupation
Military Reviewin Yandex News
Military Reviewin Google News
40 comments
Information
Dear reader, to leave comments on the publication, you must to register.