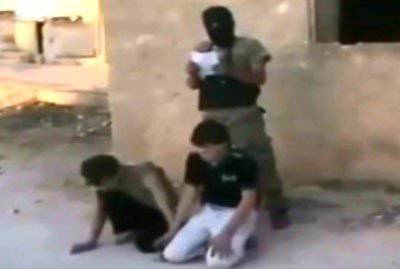 Aleppo ... Two boys, 10-12 years old, are kneeling at the wall of a small, nondescript house. A terrorist in a mask covering his face reads the verdict ... No other participants in this Lynch trial over the children are seen in the video - but they are present behind the scenes. After reading the sentence, the cries of "Allah Akbar" are heard. Shots sound and the boys are dead.
Their whole "fault" was that they were born in those areas where the people support the army and oppose the bandits. The monstrous court convicted the extremist organization Islamic State of Iraq and the Levant, which belongs to Al-Qaeda.

Earlier, a similar “lynch court” sentenced two elderly priests to death, who were then cut off their heads and showed them to the crowd screaming for joy.

Now they are judging and executing children ... And this is also not the first case in the same Aleppo. The world remembers how two months ago, in the Al-Shaar quarter, terrorists shot 15-year-old teenager Muhammad Kataa, who was selling coffee, accusing him of "heresy."

A BBC reporter, Paul Wood, spoke with the mother of the murdered boy. She said that Muhammad was a good son, whom everyone in the area loved. In the last year, he did not go to school (like many children, from whom the terrorists took away the right to a normal childhood). Helping the family survive, he sold coffee from a cart. When one militant demanded to sell him coffee for free, the boy answered something like: “Not before the Prophet returns.” Further, as the mother said, Muhammad was shoved into a car. Half an hour later he was taken out beaten. But this villains are not satisfied. They began to gather people with cries, including the teenager’s mother. One of them shouted: "He who insults the Prophet will be killed by Sharia law."

“I ran barefoot into the street and heard the first shot. They shot their son and kicked him. I turned to them: “Why are you killing him? After all, he is still a child! ”“ He is not a Muslim, go away, ”they shouted at me.”

The BBC correspondent, who believes in “democracy”, quotes one of the supporters of the “opposition”, who says: “We used to have freedom, now there are Sharia courts everywhere.”

Further, in his report, the reporter described how such a “court” in the city of Serakib sentenced a man to a public whipping for theft, and the sentence was immediately executed. Judging by the Sharia, a more severe punishment is imposed for such a crime — from cutting off the right hand to the death penalty — but since the one who stole was one of the militants, he was simply whipped up.

Well, and those who do not belong to the terrorists, and especially do not support them - the “Sharia courts” impose draconian death sentences, regardless of age, or gender, or san ... We see the result in the video - the execution of priests, the execution of children . And, of course, mass slaughter cases occur without any verdicts - the killing of hundreds of people in the Khan Al-Asal district of Aleppo province, the massacre of Kurds near the city of Tel Abyad, the barbaric crimes of gangsters in the north of Lattakia province, where that they are from Alawite families.
World human rights activists are silent, and if their voices are heard, it is only in defense of the so-called "rebels" - those who are pulling the country in the Middle Ages ...

22 a year ago, the Union of Journalists was formed in Syria. August 15 celebrates Journalist Day in the country.

On this occasion, a delegation of leaders and workers from leading Syrian media visited the wounded soldiers at the Yusef Al-Azme Hospital. Journalists wished the soldiers a speedy recovery. The soldiers said they wanted to return to the ranks as soon as possible and continue the battle with the terrorists until they were completely expelled from every inch of the Syrian land.

Chairman of the Syrian Union of Journalists, Ilyas Murad, on the occasion of the journalist’s day, made a statement in which he said that the national media play a crucial role in opposing the anti-Syrian conspiracy. He noted that a fierce information war was launched against the country. A number of corrupt journalists from Al-Jazeera-type TV channels have become puppets in the hands of aggressors. They spread misinformation about Syria, just as they had previously lied about events in Libya.

(It should be recalled here - the legitimate Libyan leader Muammar Al-Gaddafi, who was subsequently brutally murdered by NATO mercenaries, said in an interview that the resolution on the introduction of a no-fly zone over Libya is the only one of its kind, based on false television reporting. Thus, the price Lies may be too high - a bombed out country and hundreds of thousands of dead).

The head of the Syrian Union of Journalists in his statement recalled that many Syrian journalists were killed, injured, abducted. Remaining in the ranks - often exposed to threats. But despite this, they continue their noble work, believing in the justice of the cause, which they defend with their word. “This is no less important than military force, and sometimes even more important,” he noted.

On this day, I really would like to remember all the fallen journalists. Al-Ihbariya’s correspondent Yaru Abbas killed 27 on May 2013 ... Three journalists of the same TV channel shot by the terrorists 30 on June 2012 of the same TV channel killed in September 2012 of the Iranian militants in Damasc. SANA Ali Abbas, a journalist of the agency killed in his home in August 2012. And many, many others who sought to tell the truth. The truth that the West and its puppets do not like so much.
The trial of the children in Aleppo