August 16 2013
34
This week marks exactly 5 years of completion of the Georgian-Ossetian or, as it is also called, the Russian-Georgian military conflict. The completion was associated with the so-called Medvedev-Sarkozy agreement, which was signed by Georgian President Mikhail Saakashvili after the then French leader delivered him (the agreement) to Tbilisi. Today, the very signature still sitting in his presidential chair Saakashvili is commemorated in Georgia with an unkind word. The meaning of the claims to the current president is this: if you say that Russia occupies the territory of Abkhazia and South Ossetia, then why did you sign the agreement that Sarkozy slipped to you? .. 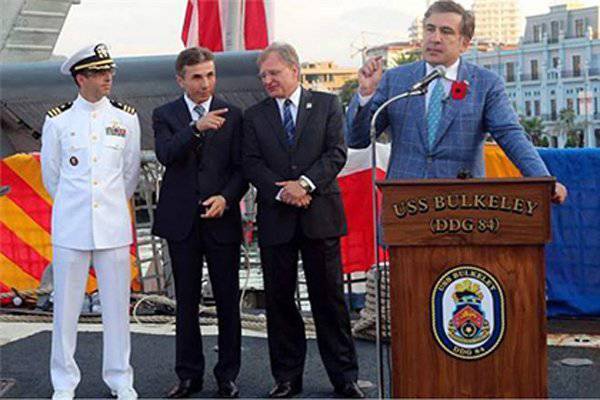 It is worth recalling that in 2008, Saakashvili did not just sign a document that put an end to the military confrontation between Russia and Georgia, but he himself made several clauses in the treaty, which put a final point in accepting the new status of Abkhazia and South Ossetia - the status of independent states. In other words, in the opinion of the current opponents of Mikhail Saakashvili in Georgia, the president in 2008 not only unleashed a bloody massacre in the Caucasus, but also did everything with his own hands so that Georgia would split into three separate states.

Such claims against the current president, who remains in his post for about 2 months, are expressed by the activists of the “National Front”, who recently picketed Saakashvili’s residence, urging him to judge as a state criminal.

The leaders of the Georgian “National Front” declare that Saakashvili, signing the Medvedev-Sarkozy agreement, was trivially scared for his own life, because if this agreement was ignored by them, the Russian troops might well have been on the very next day in Tbilisi, and The watches of Mikhail Nikolozovich’s power would be numbered roughly 13-14 August 2008. It is with cowardice and nothing more that the representatives of the National Front explain the President’s behavior in August 2008, when he signed commitments to withdraw Georgian troops from Abkhazia and South Ossetia, which at that time were integral parts of Georgia.

By the way, the claims of the National Front are not the first time when not only Russian authorities, but also political forces within the Georgian state see Georgia as the culprits of a split in Georgia itself. This suggests that in Georgia today there is a rethinking of the situation of August 2008 of the year in Georgia, and that the real culprit of those events may very soon be, in the best case for him, behind bars.

Meanwhile, the events of 2008 of the year themselves and the direct participation in them of Mikhail Saakashvili seem to be the main cornerstone of the new election campaign in Georgia. The parties that lead Saakashvili and Ivanishvili will try to do everything to put their candidate in the presidency. Today, the Georgian Dream party of Prime Minister Ivanishvili is in a winning position, but opponents are not going to surrender without a fight.

One of these “battles” occurred literally the other day on board the American Navy ship BULKELEY, which, of course, went to the port of Batumi on a friendly (with some other) visit.

The host of the American ship was the Georgian government, which is headed by Bidzina Ivanishvili. The prime minister decided to take advantage of the host’s position and delivered a speech in which, in the presence of Mikhail Saakashvili, he accused the latter of starting the war in the Caucasus in August 2008. And if we take into account that Mr. Saakashvili himself a couple of months ago, having opened up before the press, stated that he had actually unleashed the conflict with the direct support of the United States and President Bush Jr. personally, a spicy situation arose aboard the American ship. It turns out that Ivanishvili, consciously or not, through the head of his internal Georgian opponent, directly accused the United States of aiding the destabilization of the situation in the Caucasus in 2008.

I am categorically against the claims that Georgia has any responsibility for the 2008 war of the year. Those who say this either do not like Georgia, or have other problems, or are in collusion with Russia. I hope that you are not in collusion with the enemy of Georgia and realize your responsibility, the Georgian president decided to parry the words of Ivanishvili.
It could have parried, but what about the statements of Saakashvili himself when he claimed that without the approval of the United States there would have been no conflict. Now it turns out that Saakashvili decided to play back. This is understandable, because at the time of his new ardent speech about Russia as an enemy of Georgia, he was not in his residence, but on board the US Navy ship, but here, whether you want to or not, you will have to start an old disc, which George Walker once gave him Bush - well, the one that is younger.

Bidzina Ivanishvili, all on the same Batumi reception of the American ship in a somewhat ironic form, asked Saakashvili, which means a very strange accessory on the lapel of his jacket. The accessory turned out to be a bright red flower, which stood out against the gray-blue tartan suit of the president. Apparently, Ivanishvili wanted to hint: didn’t, incidentally, remember Mikhail Nikolozovich about his Komsomol past ... Saakashvili said that the flower is a symbol of the memory of the victims of the August 2008 conflict.

After an internally-correspondence conversation, a skirmish with reciprocal barbs between Ivanishvili and Saakashvili, the chairman of the Georgian parliament David Usupashvili had to intervene, who apologized for the overly emotional and inappropriate spirit of the warm reception of the Georgian president. Ivanishvili didn’t apologize for his behavior, apparently considering that Saakashvili was also a guest at the reception, like the Americans, and therefore more guilty of obscene behavior.

Given the emerging processes in Georgia, it seems that for two months Mikhail Saakashvili is left not only until he leaves his post, but also before the representatives of the competent authorities knock on his door. What's next? Then there are options: either urgent emigration from the eyes of the Georgian people down (this is the best option for Saakashvili), or the fate of Mrs. Tymoshenko, or quite radically in the style of “Georgian Mursi”.