Lessons from the Five Day War for Estonia

August 15 2013
117
The well-known Estonian politician and nationalist Mart Laar (who managed to be both the Prime Minister and the Minister of Defense of Estonia) published the article "Mart Laar: Vene-Gruusia sõda - 9 õppetundi Eestile" ("Russian- the Georgian war - 2013 lessons for Estonia ”), in which he shared his thoughts on the lessons that, in his opinion, the Estonian state and the Estonian armed forces should learn from the Russian-Georgian Five Day War in August 10. From the text of the article it can be seen that Mart Laar carefully examined the well-known collection of articles published by the AST Center "Tanks August "about this conflict.


We offer the translation of an interesting article by Marta Laar, made by the well-known human rights lawyer, the Russian Ombudsman in Estonia, Sergei Seredenko (original translation here). 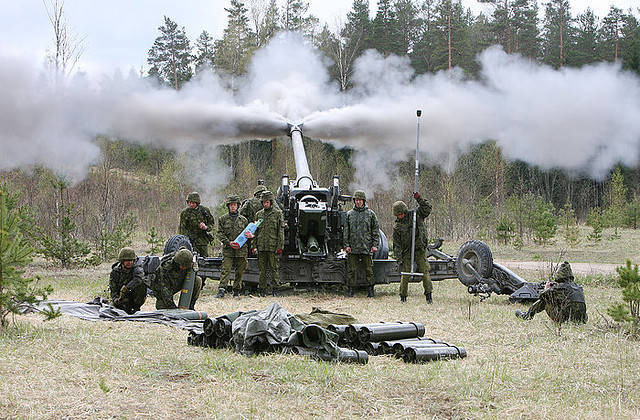 Firing 155-mm / 39 towed howitzer FH-70 artillery battalion (Suurtükiväepataljon) of the Estonian army. 24 such guns were bought by Estonia from the presence of the German Bundeswehr for 7 million euros in 2003-2005. April 2009 of the year (c) Estonian Armed Forces (via Rostimees)

Mart Laar (Secretary of Defense in 2011-2012, IRL) writes about the lessons Estonia should have learned from the Russian-Georgian war five years ago.

Five years after the war between Russia and Georgia. Much has been written about this, and even a feature film was shot, but many questions remained unanswered. There are, for example, different opinions about when exactly this war began and when it ended, who started it and who was to blame for it. Leaving aside the political aspects of this war, I will focus on ten lessons that could be useful for organizing the state defense of Estonia.

1. Better the harsh truth than beautiful illusions. If Russia has been preparing for war for years and knew exactly what it wants, then Georgia is not. Georgia allowed itself to be drawn into the war at an extremely unfortunate time. The best brigade served in Iraq, and the second brigade was just about to change it. Part of the army was on rearmament and was engaged in the care of equipment, many officers were released on vacation. The Minister of Defense was on holiday in Italy.

The Georgian army lived by illusions. There were no solid preparations for the defense of Georgia. The war was expected to be conducted on the territory of either Abkhazia or South Ossetia. According to the Georgians, Russia's intervention was possible only in the volume of the wars of the nineties. Extensive intervention by the Russian troops was considered extremely unlikely, and they were not particularly considered when planning the operation. Therefore, a clash with the Russian army was for the Georgian soldiers a complete surprise and shock, from which they could not recover in a few days. The Georgian army lived entirely with illusions, and therefore it was already going to meet defeat.

2. Staff work and decent plans determine the course of the war. The Russian army was prepared for war up to the last button on the fly, the operation was worked out and thoroughly worked out. Georgian troops should be forced to launch an attack in South Ossetia, after which they should be surrounded and destroyed. And then completely defenseless Georgia was easy to attack and carry out a change of power there.

Georgian plans, on the contrary, were extremely vague. Their initial plan took into account the possibility of limited intervention by Russian troops, and he thus had a certain connection with reality, but they did not envisage an attack on the capital of South Ossetia, Tskhinval. One brigade had to pass to the left of the city, and the second to the right, outside the city, they had to unite and move in the direction of Gupta and the Roki tunnel in order to prevent all kinds of Russian assistance.

The conquest of Tskhinval was a subsequent task. At the last moment, however, this plan was changed, and a direct attack was made on Tskhinval. Instead of moving quickly, troops were thrown at him. The Georgian troops never reached the Gupta Bridge, let alone the Rosk Tunnel. This decided the outcome of the war.

If some time ago, similar problems and the Estonian army, in recent years the situation has changed. Staff work and planning became more specific and realistic. This creates the basis for strengthening defenses.

3. Sight provides intelligence. Both sides in the Russian-Georgian war reacted to intelligence relatively arrogantly. Russian intelligence did not have accurate information about Georgia, and they greatly underestimated Georgia’s ability to resist.

Although Georgian intelligence had a lot of data about Russia, there was not a decent analysis that would bring all these data together. In addition, NATO's technical intelligence too trusted, which, however, completely overslept the concentration of Russian troops near the border, from where they were able to quickly advance to South Ossetia. They proceeded from the assumption that Russia will not attack its neighbors. The Russian-Georgian war completely refuted this assumption, and now all the data are analyzed from a different point of view.

Estonia has done a lot of work on building intelligence and early warning systems, and has achieved good results in this. Of course, this work should be continued.

4. Psychological protection is also important. The war was preceded by a massive information attack from Russia. Georgia tried to present the world as a small, aggressive and unpredictable country ruled by insane moral monsters. Thus it was possible to isolate Georgia from the allies, and to present its warnings unreliable. And in the subsequent course of the war, the battle in the information field played a significant role. No wonder it said that Russia could have won the battlefield, but in the end lost on the information front.

Estonia after the 2007 year realized the need for an information war, but because of the desire to attack Defense Minister Jaak Aaviksoo personally for undertakings in matters of psychological protection, the latter were frozen. It is time to bring plans to life.

5. Modern war is total. The Russian-Georgian war showed that in modern war conventional methods of warfare are intertwined with new ones, such as cyber or information war. At the same time, as Russian tanks set in motion, cyber attacks began. Both cyber attacks and aerial bombardment were used to shut down Georgia’s information systems.

Estonia has realized the need for large-scale defense, but the relevant laws are still awaiting adoption.

6. A good medical service and personal protective equipment saves lives. In the Russian-Georgian war, more than 1200 Georgian soldiers were disabled, two thirds of them wounded. Many of them could have died, but were saved thanks to protective body armor and decent helmets. The wounded were hastily evacuated from the battlefield and the medical service worked well. Only three percent of the soldiers died from their wounds. In Estonia, great attention was paid to the development of the medical service, but even here we were only at the beginning.

7. Airspace control is critical. Georgian air forces are few in number, and throughout the war they were used only in one mission. This was reasonable, since otherwise these aircraft would have been shot down. The Russian Air Force, at least theoretically, could feel completely bold in the Georgian sky. Georgian air defense tried to resist, but was quickly suppressed, and after losing the radar it became completely blind.

Effective were mobile MANPADS, which were in the hands of the fighters. However, they were few or outdated. At the same time, the Russian Air Force for several days could not use its absolute superiority in the air. The interaction between the Russian air force and ground forces was extremely weak. Ground forces, every plane seen in the sky was considered Georgian, and opened fire on it. More than half of the aircraft lost by Russia in the war were shot down by their own troops. And the planes bombed the parts moving on the ground.

Estonia relies on a NATO air shield and does not spend resources on developing its own air force, which in any case will be instantly shot down. The air defense system is developing, but there is still a lot of space for development of mobile missiles.

8. Tanks and artillery should not even pass in memetallom. The Russian-Georgian war showed that both tanks and artillery play an important role in modern warfare. The tanks helped to besiege the onslaught of the Russian troops at the beginning of the war, and played a major role in smashing a column of the Russian 58 army commanded by General Khrulev 9 August 2008. The Gori artillery brigade, whose combat capability was highly appreciated by Russian sources, played a leading role in repelling Russian troops approaching Tskhinval.

9. Half-way solutions do not work. Instead of the “paper army” and parade units, attention should be paid to the creation of integral units. Better than them will be less, but let them be better. What was the use of Georgia from its brigades, if some guys lacked a normal connection, while others did not have transport? The ability of such units to participate in combat is zero. Hardly, but Estonia is beginning to understand this, and this is taken into account in the new program for the development of state defense.

10. At NATO, hope, but keep the powder dry. International relations are extremely important, but in the end you can still hope only for yourself. Georgia’s hope that someone will provide effective assistance to it did not come true during the war. If they didn’t fight themselves and, despite all the mistakes and unsuccessful dealings, they didn’t slow down the advancement of the Russian troops even for a few days, the Georgian state would be swept away, and the leadership would be transferred to a completely different government. Despite all the mistakes, the Georgians themselves saved the Georgian state.

For Estonia, this experience means that we must be well integrated and worked with NATO, but at the same time we must take care of our own defenses in every way. What is important here is the strong will to defend, or the desire, if necessary, to speak out in defense of their state. The stronger it is, the safer it is.

Ctrl Enter
Noticed a mistake Highlight text and press. Ctrl + Enter
We are
Nikolay Silaev, Andrei Sushentsov: Georgia after the elections and prospects for Russian-Georgian relationsMaxim Reva: The betrayal of the national elite of Estonia and the retribution of the people
117 comments
Information
Dear reader, to leave comments on the publication, you must to register.