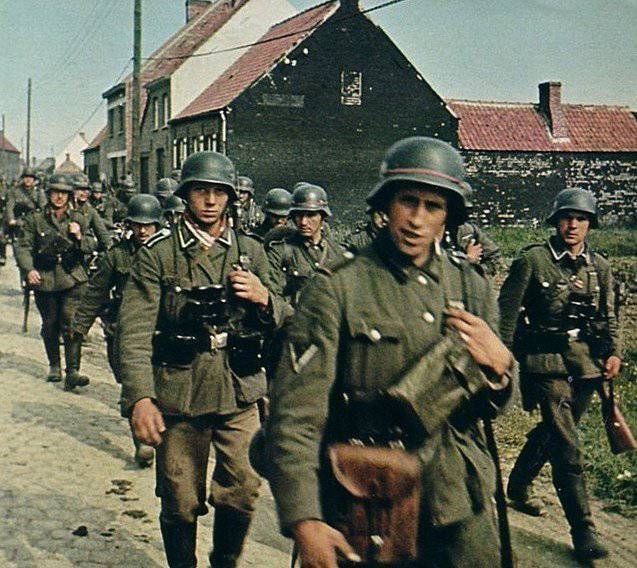 This is my last article on the “Military Review” from a series devoted to issues and problems of the crisis of self-identification of Russians in Ukraine through the eyes of a Russian-speaking citizen of Ukraine. The Russian world is retreating. I sincerely hope that someone will continue to write on this topic more seriously, professionally, scientifically and substantively. And the problem is very urgent.

While the Russian media are distressing about the ceremonial reburial of the remains of the “warriors” of the SS division “Galicia” in Western Ukraine with the participation of German attributes of the SS and Wehrmacht, the processes have gone much further and even closer to the borders of Russia.

So, still studying at school in distant 90-e., In textbooks stories Ukraine was a continuous dualism. It is clear that the authorities had “red” directors; the country needed to develop, rather than stand on barricades. Dualism in brief consisted of the following formula: “yours and ours”. It seems to be democratic. If you are a citizen of Ukraine, you are obliged to know the Ukrainian language and respect the regions of the country, where there are other traditions, culture and another story. As if nothing complicated. Not on my own city street and for 1000 km from the Carpathians, will the UPA parade be held ?! Many closed their eyes ..

This is a “familiar” picture in Western Ukraine! Honoring SS "Galicia". There has never been a fairy tale about the "bad" and "good" members of the UPA, everything is here and its heroes!


We were taught from childhood that, they say, the OUN of the UPA was heterogeneous, and there is no need to dump everything, namely, to call all the UPA participants accomplices of Nazism. Those. there were “bad” banderovtsy who, under the leadership of Melnik, decided solely to rely on the might of the German bayonet in the struggle for the independence of Ukraine against the Bolsheviks. But there were also "good" Bandera who heroically and desperately fought on two fronts, against the Wehrmacht and against the Red Army. And there were such villains, because of which the entire UPA movement was compromised, it is, of course, members of the SS Division "Galicia", who not only relied on the help of the Germans, but also became their combat unit. Here they are, and were 100% as alcohol, accomplices of fascism. Further, Ukrainian experts, as a rule, differently substantiated the cause of the emergence of this division. Some said that the Bolsheviks in 1939-1941 so terrorized the people in Galicia, that he was ready to rush into the arms of the devil. Others argued that this military compound was formed by force. Thus, the Ukrainian society was shown three different “fighters” for independence, not forgetting to mention that there were provocations by the NKVD under the guise of UPA. So it was in the textbooks 90-x in the section on the topic: OUN-UPA, that now I do not know!

But there were years, decades. Ukrainian society was “accustomed” at first to the marches of nationalists, then to the marches to UPA veterans in the capital, and now the veterans of the SS Division “Galicia” are taking the stage. Why hide? The old generation is gone. New has grown on the "new" textbooks and media. But the tragedy is that it is no longer limited to Western Ukraine !! People!!! We did not have time to wean out of the thought that the supporters of Freedom had stormed the mayor of Odessa (the first city), which at the beginning of the 2000s, was difficult to imagine how this spring in the city Krivoy Rog, Dnipropetrovsk region commemorated the march "warriors" SS Division "Galicia". And here comes the moment of truth ... Southeastern Ukraine, no one else even tries to sweeten the pill in the form of a fairy tale: “bad” and “good” police, take it and swallow it as it is! All those who killed Soviet soldiers and Russians, and no matter with whom in the union, are heroes! Game over. Time comrades gone. The play called “tolerance” to other eastern regions is over, leave the auditorium and go out! They became closely in Western Ukraine. They are preparing to cross the Dnieper. Krivoy Rog, this is not a bell, this is a bell !!!

SHOCK: And this is a city Krivoy Rog. Also honoring the SS Division "Galicnia". What historical relation does this have to the Dnieper region is not clear !?


For a resident of Russia, perhaps this is a shock. But if I raise this topic in the urban resources of my Russian-speaking city of Berdyansk, then at best they will write to me: “Do not provoke a split in Ukraine,” but how often does it happen: “The Kremlin trill and Putin litter went away from here.” All these links, I indicated in previous publications. Children and grandchildren of yesterday’s military servicemen and workers from the RSFSR are becoming Russian-speaking Russophobes, and then to the maximum.

Special attention should be paid to the phenomenon of “doustiness” of Eastern-Ukrainian “patriotism”. I even met him in the comments to my articles on the “Military Review” of guests from Ukraine. The bottom line comes down: “Yes, if Bandera comes to me in Donetsk, then I will give them on the head!” Did I not see something that someone in Krivoy Rog gave on the head? City of workers is silently swallowed! I give a tooth, in 3-5 years, we can see this on the streets of Kharkov and Donetsk. It is already not just about the nationalists! And as always, the philosophical question for all countries where the line between patriotism, nationalism and fascism ?! What geopolitical consequences this has for Russia, I think it is not necessary to explain! Our power elite of Ukraine missed when they removed the filter "tolerance."

Separate attention deserves the virus consumer "culture", which is rampant in the cities of one million people: Dnepropetrovsk, Kharkov, Donetsk, Odessa, Zaporozhye. And then everyone wonders why in the Russian-speaking Odessa no one stood up for the Russian flag when the American group Bloodhound Gang publicly mocked it.

PS I am not a Ukrainophobe, I know Ukrainian, I am a fan of the football and Olympic team of Ukraine, but I cannot keep silent!

Ctrl Enter
Noticed a mistake Highlight text and press. Ctrl + Enter
We are
How history is rewritten in school textbooks of the peoples of the former USSRAbout Stalin and Khrushchev
166 comments
Information
Dear reader, to leave comments on the publication, you must to register.