Fight about which liberal "historians" are silent 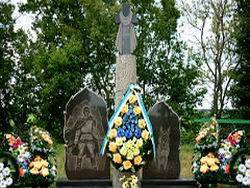 
В stories The Great Patriotic War was a mass of battles and battles, which for one reason or another, as they say, were left behind the scenes of the Great War. And although military historians have ignored almost none of the battles, and even local clashes, nevertheless, a number of battles of the initial period of World War II have been studied very little, and this topic is still waiting for its researcher.

German sources mention such battles very sparingly, but there is no one to mention them from the Soviet side, since in the overwhelming majority of cases there are simply no living witnesses left. However, the story of one of these “forgotten” battles that took place on 30 in July, 1941, near the Ukrainian village of Legedzino, fortunately has reached our days, and the feat of the Soviet soldiers will never be forgotten.

Actually, calling what Legedzino happened to be a battle is not entirely correct: rather, it was an ordinary battle, one of the thousands that happened every day in the tragic year of July 1941 for our country, if not for one “but”. Fight at Legedzino has no analogues in the history of wars. Even by the standards of an eerie and tragic 1941 year, this fight went beyond all imaginable limits and clearly showed the Germans what kind of adversary they encountered in the face of a Russian soldier. To be more precise, in that battle the Germans were opposed not even by units of the Red Army, but by the NKVD border guards - the very ones that for the last quarter of a century had not been offended only lazy.

At the same time, many historians of liberal color do not want to see the obvious facts: the border guards not only were the first to take the aggressor’s blow, but in the summer of 1941, they performed completely unnatural functions, fighting with the Wehrmacht. And they fought valiantly and sometimes no worse than the personnel units of the Red Army. Nevertheless, they were enrolled en masse to the executioners and called them "Stalin's oprichniki" - only on the grounds that they belonged to the office of L.P. Beria.

After the tragic battles near Uman for the 6 and 12 armies of the South-Western Front, which resulted in the next "boiler", the remnants of the divisions surrounded by 20 tried to break through to the east. Someone succeeded, some did not. But this does not at all mean that the surrounded parts of the Red Army were for the Germans "whipping boys." And although liberal historians paint the picture of the Wehrmacht’s summer offensive as a continuous “drape” of the Red Army, millions of prisoners and bread and salt for Hitler’s “liberators” in Ukraine, this is not true.

One of these historians, Mark Solonin, generally presented the Wehrmacht confrontation with the Red Army as a battle between the colonialists and the natives. Saying against the background of the French campaign, where Hitler's troops suffered, in his opinion, significant losses, in the USSR in the summer of 1941, there was not a war, but almost an amusing light walk: “The ratio of 1 losses to 12 is possible only when white colonialists, who sailed to Africa with guns and guns, are attacking the aborigines defending themselves with spears and hoes "(M. Solonin." June Xnumx: day M "). This is the characteristic Solonin gave to our grandfathers, who won the most terrible of wars in the history of mankind, comparing them with the natives armed with hoes.

You can argue about the loss ratio for a long time, but we all know how the Germans counted their dead soldiers. They still have dozens of divisions as “missing”, especially from those that were destroyed during the summer offensive of 1944. But let us leave such calculations on the conscience of liberal historians and better turn to the facts, which, as we know, are stubborn things. And at the same time, let's see how the Nazi’s “easy walk” actually looked like on the land of Ukraine at the end of July 1941.

On July 30, near the Ukrainian village of Legedzino, an attempt was made to stop the advancing parts of the Wehrmacht by the forces of the combined battalion of the border troops of the separate Kolomyia commandant under the command of Major Rodion Filippov with the company of the Lviv Border Dog Breeding School attached to him. Major Filippov had at his disposal less than 500 border guards and about 150 service dogs. The battalion did not have heavy weapons, and indeed, by definition, it was simply not supposed to fight in an open field with a regular army, all the more superior in numbers and quality. But this was the last reserve, and Major Filippov had no choice but to send his fighters and dogs to a suicidal attack. Moreover, in a fierce battle, which grew into a hand-to-hand battle, the border guards managed to stop the Wehrmacht's infantry regiment opposing them. Many German soldiers were torn to pieces by dogs, many died in hand-to-hand combat, and only the appearance of German soldiers on the battlefield tanks saved the regiment from shameful flight. Of course, border guards were powerless against tanks. 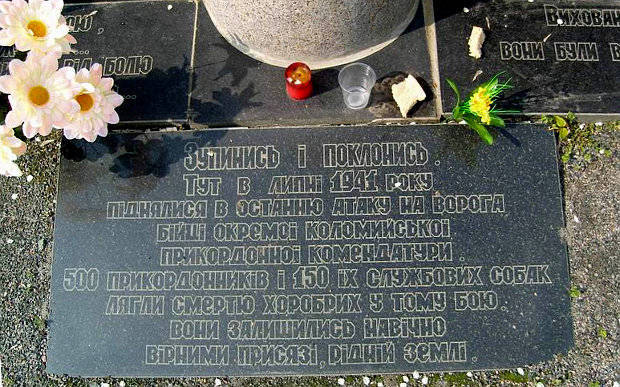 Monument to the heroes of the border guards and service dogs

From the battalion Filippov no one survived. All five hundred fighters died, like 150 dogs. Rather, only one of the dogs survived: the inhabitants of Lehedzino were leaving a wounded shepherd, even though after the occupation of the village, the Germans shot all the dogs, including even those who were sitting on a chain. Apparently, they got hold of them in that battle if they swept out their anger against innocent animals.

The occupation authorities did not allow the buried dead border guards, and only by 1955, the remains of all the dead soldiers of Major Filippov were found and buried in a mass grave near a village school. After 48 years, in 2003, with a donation from Ukrainian veterans of the Great Patriotic War and with the help of a canine of Ukraine, on the outskirts of the village of Legedzino, a monument to hero guards and their four-legged pets, who honestly and to the end, fulfilled their military duty, was opened .

Unfortunately, it was not possible to establish the names of all the border guards in the bloody whirlwind of summer 1941. Failed and after. Many of them were buried by unknown, and from 500 people managed to establish the names of only two heroes. Five hundred border guards deliberately went to their deaths, absolutely certain that their attack against a well-equipped personnel regiment of the Wehrmacht would be suicidal. But we must pay tribute to Major Filippov: before he died, he managed to see how the Hitlerite warriors, who had conquered the whole of Europe, were torn to pieces and chased, like sheep, to shepherd dogs and destroyed in hand-to-hand fighting by his guards. For the sake of this moment it was worth living and dying ...

Liberal historians who have been actively rewriting the history of the Great War have been trying for years to tell us chilling stories about the bloody "exploits" of the NKVD. But at the same time, at least one of these "historians" recalled the feat of Major Filippov, who forever entered the history of world wars as a man who stopped the Wehrmacht infantry regiment with only one battalion and service dogs!

Why is Alexander Solzhenitsyn, so much honored nowadays, whose name is called the streets in Russian cities, did not mention Major Filippov in his multi-volume works? Alexander Isaevich, for some reason, liked not to remember the heroes, but to describe the post-apocalyptic frozen barracks in Kolyma, which, according to him, “for warming” were covered with corpses of unfortunate convicts. It is for this cheap trash in the spirit of a low-budget Hollywood horror film that is named after him in the center of Moscow. His name, and not the name of Major Filippov, who accomplished an unparalleled feat!

Spartan king Leonid and his 300 fighters immortalized their name for centuries. Major Filippov, in the conditions of total chaos of retreat, having 500 tired fighters and 150 hungry dogs, went into immortality, not hoping for rewards and not hoping for anything at all. He just went into a suicide attack on machine guns with dogs and three-lines and ... won! A terrible price, but won those hours or days, which then allowed to defend Moscow, and the whole country. So why no one writes about him and does not make films? Where are the great historians of our time? Why didn’t Svanidze and Mlechin say anything about the fight at Legedzino, why didn’t the next investigative journalism investigate the Brewers? Episode, unworthy of their attention? ..

It seems to us that they don’t pay well for the major Major Filippov, so no one needs him. It is much more interesting to savor, for example, the Rzhev tragedy, kicking Stalin and Zhukov, and major Filippov, and indeed dozens of similar heroes, can be ignored. As if all of them never happened ...

But God be with them, with liberal historians. It would be much more interesting to present the moral state of the conquerors of Europe, who yesterday briskly marched around Paris, and under Legedzino looked sadly at the torn pants on the ass and buried their comrades, the victorious march for which ended in Ukraine. The Fuhrer promised them Russia - a colossus with feet of clay, stick and fall apart; and what did they get in the second month of the war?

But the Russians have not yet begun to fight, traditionally harnessed for a long time. Ahead were still thousands of kilometers of territory, where every bush shoots; There were still Stalingrad and the Kursk Arc, as well as the people, who cannot be defeated simply by definition. And it was already possible to understand all this in Ukraine, when confronted with the soldiers of Major Filippov. The Germans did not pay attention to this fight, considering it an absolutely insignificant clash, but in vain. For which many later paid.

If Hitler's generals were a little smarter, like their Fuhrer, in the summer of 1941, they would begin to look for ways out of the adventure with the Eastern Front. It is possible to enter Russia, but few have managed to get back on their own two feet, which was once again very clearly proved by Major Filippov and his fighters. It was then, in July 1941, long before Stalingrad and the Kursk Bulge, the prospects of the Wehrmacht became hopeless.

Historians such as Mark Solonin can talk about the loss ratios for as long as desired, but the fact remains: after the successful summer offensive that ended December 5 near Moscow by the knockout counterattack of the Red Army, the Wehrmacht ran back. He ran so fast that Hitler was forced to revive his own army by detachments. But it could not be otherwise: after all, it would be naive to believe that such people as Major Filippov and his fighters could be defeated. To kill - yes, but not to win. Therefore, the war ended with what it was supposed to end with - victorious May 1945 of the year. And the beginning of the Great Victory was laid in the summer of 1941, when Major Filippov, his frontier guards and dogs went into immortality ...