A. Saveliev: “A big interethnic war is coming” 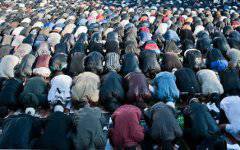 The government continues to indulge visitors in everything, ignoring the interests of the indigenous population. Those who, quite recently, so vehemently argued for the law “on the protection of the feelings of believers,” are now experiencing a real test of loyalty to the principles. The Moscow authorities, albeit with some reservations, nevertheless went to meet the local Muslim community - the traffic pattern in the capital was adjusted so as not to prevent the Mohammedans from performing namaz on one of the great Islamic holidays, Uraz Bairam.


Neighborhoods near the Prospect Mira metro station were again covered with prayer rugs, and while the non-learned tolerance Muscovites-non-Muslims practiced in virtual space in the comments of this action. Expectedly dominated reviews completely intolerant, sometimes on the verge of law. The subject, to put it mildly, critics in most cases is not a holiday at all, and not Islam as such. It’s just that not everyone was ready to go back to Abu Dhabi or Tehran, except perhaps that the surrounding Late Stalinist architecture reminds a casual witness that it is still in Moscow, once called the Third Rome, into the “gold-headed” one.

Here you really need to have some special inner moral strength to watch this not to sin - at least against the newly adopted law, including those who came to pray and settled down right on the roadway. “For there is nowhere else!” - local Islamic spiritual leaders lament the city authorities with reproach. In terms of the number of mosques, Moscow is indeed behind the mediocre city in Saudi Arabia - that is, that is. But only local Muslims have enough of them, there are not enough migrants who came to work in the capital, including illegal migrants. The overwhelming majority of Orthodoxy would have practiced Tajiks and Kirghiz - here, you see, and the “200 temples” program in the capital would have gone faster. This is in the blood of our nomenclature - we please the newcomer, we ignore the same concerns from our own. For the sake of justice, the alien, and sometimes uninvited Muslims from the number of illegal immigrants, the metropolitan government - at least in words - does not intend to indulge. But nevertheless, looking at the calendar, where 8 September is already close, gives once again the go-ahead to the overlap of the streets.

In a conversation with a KM.RU columnist, a well-known social and political activist, chairman of the Great Russia party, Andrei Saveliev, said he was not surprised by the tolerance of the city authorities:

- We are obviously waiting for the same situation as in Syria. A large inter-ethnic war is approaching and the only question is who will be destroyed as a result of it. So far, the power is on the side of ethnic clans and gangs. Moscow has become a “New Babylon”. It is no longer the Russian capital, not the capital of Orthodoxy, it is not even the capital of Russia, because the people who rule us are in fact impostors and they don’t feel sorry for anything in Russia. That's why they give Moscow to Muslims under Uraza-Bayram and various other Islamic holidays, without asking for the particular opinion of the indigenous Muscovites.

Russian people in Moscow, in their historical the capital, there’s nothing left to do, they need to move and flee somewhere. Here they are killed, deprived of work. The streets of our city are filled with those who have nothing to do with their fate, who have nothing to do with Moscow, who have never invested anything in it, but now it is their city. The Moscow authorities and, specifically, Mayor Sergei Sobyanin are rulers who focus solely on the non-Russian population, despite all the ostentatious “purges”.

And the Russian people in the coming ethnic wars will only be consumable items to be destroyed. Although it seems to some today that, they say, the government has reoriented, because every day the police detain and arrest hundreds of guest workers and send a dozen of them back to their homeland every day. But millions of migrant workers live in Moscow, foreigners who came from other countries who do not know Russian, do not appreciate anything here. In Moscow, there are at least two million illegal immigrants who demand immediate deportation - if we, of course, do not want a big ethnic war. But they deport 10 people a day, and even then they realized a couple of weeks ago.

The situation will undoubtedly be aggravated further, while in Russia there will be a power opposed to the Russian majority, against the overwhelming majority of Russian citizens. I am absolutely convinced of this and I am convinced every day. Moscow definitely wants to turn into a non-Russian city, local authorities have already achieved significant success in this matter. Luzhkov tried very hard, and now Sobyanin is not far behind. In September, he will be declared elected mayor and will continue the same policy until it comes to a lot of blood. Then, I am afraid, only the name of Russia will remain, the rest will be sold out and only slaves and oligarchs will live on this land. Russian people will not be here - if they do not shift this power. Then there will be a chance not to become a victim of Russophobic plans. But all this needs to be done quickly. If you extend another ten years, it will be too late to do anything. With this government, with Sobyanin, with Putin, the Russians have no prospects.

Many people just find it difficult to believe that the current situation with illegal immigrants, with the expansion of Muslims - is a strategy of power. An intelligent person cannot imagine that there are people in power who are ready to inflict such a serious damage on the country. But, nevertheless, it is so: the state power defends the interests of foreigners, and not the indigenous population of Russia. Whatever they are now taking action against illegal immigrants, it is important that they opened the door to them wide open. And they are ready to grant Russian citizenship to anyone, but not to Slavs who are fleeing us from the former Soviet republics from genocide. So it is not surprising that the widespread celebration of Uraza-Bayram meets with the Moscow authorities such an understanding. Perhaps they themselves - the hidden Muslims? And even Satanists?