August 8 2013
46
In the United States of America, a trial is under way of Major Nidal Malik Hassan, a military psychiatrist, who comes from a family of Palestinian immigrants. In 2009, he opened fire on military personnel at the Fort Hood base. The bullets hit the 45 people, of whom 13 died. Shooting, Hassan shouted: “Allah Akbar!” A coup in the mind of a major occurred in Afghanistan: there he realized that he served the wrong side. 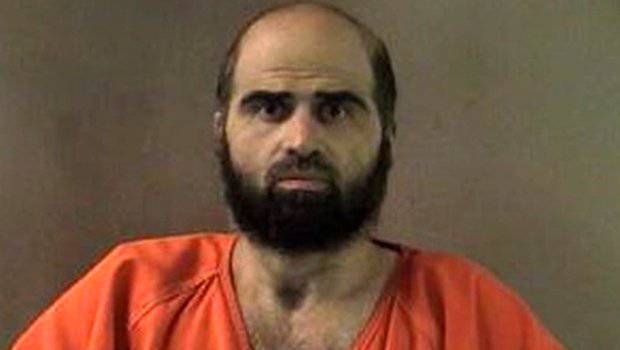 Billy Canber (Washington Post) writes that a former psychiatrist is judging a tribunal. Hassan, a US-born Muslim, is accused of mass slaughter, one of the worst in stories USA: He fired more 100 bullets in seven minutes on November 5 2009.

Hassan pleaded guilty, but the court did not accept his statements: military legal legislation does not allow the accused to declare himself guilty - in the event that the military prosecutor's office requires the death penalty.

42, a year-old warrior of Allah, paralyzed from his belt and below since he was shot down by civilian police, represents himself in court, refusing a lawyer, and therefore can interrogate his own victims.

The article says that Hassan fought not only for the right to represent himself in court, but also to preserve his beard, which he considers to be an expression of his faith (at the same time she violates the military regulations).

The psychiatrist claims that his actions were aimed at saving the lives of the Taliban leaders in Afghanistan. However, in June, the judge ruled that he could not use the argument of “protecting others”, since there was no direct threat from the soldiers at the base.

Nick Allen ("Daily Telegraph") talks about a retired 46-year-old Sergeant Alonzo Lansford - a man growing 6 feet 9 inches, who was left blind in his left eye after he had been shot in the head from Hassan. In addition, he still has a bullet in his back. And yet he is able to act as a witness. Paralyzed Hassan looked at him impassively from his wheelchair.

Mr Lansford told the court that he was conducting medical tests when Hassan opened fire, causing a "panic". The witness told how one doctor heroically rushed to Hassan with a chair - and was immediately shot dead.

According to the witness, Hassan shot, and the military either got on the floor or tried to hide behind the chairs. Lansford himself lay. Two double doors led from the room to the outside, and only one was open. Those who tried to get out, got a bullet.

Lansford nevertheless decided to climb and reach the door - she was only a few steps away, but suddenly Hassan turned to him, and the beam of the laser sight slid along the sergeant. Lansford blinked because he "didn't want to look directly at him."

The first bullet hit the sergeant in the head. He collapsed to the floor, face down, and a second bullet entered his back. Lansford decided not to move and pretend to be dead. Blood flowed around his head.

Then he managed to escape: he gathered his last strength and ran out through the close door.

Alexander Khristenko ("Vesti") reports that the three-minute introductory remarks of the major in court cast a shock to those present. He declared:

“I wanted to kill as many soldiers as possible. You will see all the evidence suggests that I shot. "

A military psychiatrist previously conducted rehabilitation courses for soldiers returning from hot spots. But on the day of the tragedy, he took with him specially purchased pistols with a laser sight.

In court, Hassan has already said that in Afghanistan, he realized the wrongness of his life. He realized that he was a jihad warrior - a mojahedin.

It is curious that the American justice system classifies shooting at the base as “violence in the workplace”. That is why Nidal Hassan is still a major and receives a monetary allowance. He is not a terrorist. Over the years of the investigation, he managed to get rich almost 300 thousand dollars.

Observed and translated by Oleg Chuvakin
- especially for topwar.ru
Ctrl Enter
Noticed oshЫbku Highlight text and press. Ctrl + Enter
We are
Situational analysis of the death of the MH17 flight (Malaysian Boeing 777), made on the basis of engineering analysis from 15.08.2014Results of the week. “War is not poker! It cannot be announced when it pleases! ”
46 comments
Information
Dear reader, to leave comments on the publication, you must to register.