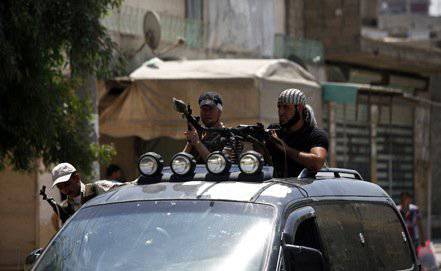 MOSCOW, 7 August. ITAR-TASS. Moscow hopes that the UN Security Council will condemn the massacre of the Kurds in the north of Syria. This was announced today by Russian Foreign Minister Sergei Lavrov after talks with a colleague from Ghana.

“We were shocked by reports that in the north of Syria around 450 peaceful Kurds, around 100 children were brutally murdered, just because a man from their tribe fought against the / terrorist organization / An-Nusra,” he said. The scale of violence is going wild, and this must be stopped immediately. "

“I expect that the UN Security Council without any reservations will strongly condemn all these terrorist acts and will consistently maintain its position,” Lavrov stressed. “We used to observe how some Security Council members did not want to condemn terrorist acts in Syria, on the basis of that, cynically, it sounded that those who carry out these acts are fighting against the exhausted regime. " “This position is absolutely unacceptable,” the minister is convinced. “Terrorism should be approached without any“ double standards. ”

“What is happening now makes the task of fulfilling the appeal that was voiced at the G8 summit to the Syrian government and the opposition, to unite in order to fight terrorists and drive them out of Syria, more and more urgently,” he said. This is part of the decisions of the G8 summit for some reason is now hardly mentioned. "

Lavrov warned that "if you let everything go of its own accord and continue to incite the Syrian opposition to ensure that it does not deviate from the course towards overthrowing the regime, then in battles between the government army and the so-called Syrian free army they will simply wage a war of attrition" . “Dzhebhat al-Nusra will receive the benefit from this, other terrorists who do not hide their goals - to establish a caliphate in Syria,” the Russian Foreign Minister drew attention. “This is where the delay in taking tough measures to curb hostilities and redirecting this entire war machine — from both the government and the opposition — to the fight against terrorism. "

"I think that this task should be discussed as a priority if we have time or can convene an international conference on overcoming the Syrian crisis based on the full implementation of the Geneva communique from 30 June 2012 of the year," said the Minister. As I have already said many times, I have already confirmed my readiness to participate in such a conference without preconditions. We are waiting for the appropriate reaction from the opposition, which so far declares that before sitting at the negotiating table, oevat and achieve some military success "on earth."

“What this leads to, I have already said about this,” Lavrov continued. “I hope that those who influence the opposition will still push them into thinking that they should think not about the struggle for power, but about the country, about the fate of their of the people. "