Tayyip Erdogan and the vicious circle

August 5 2013
110
Recep Tayyip Erdogan, the Prime Minister of Turkey, can not get into Gaza. The roundabout path there lies through Egypt, and the new Egyptian authorities do not want anyone who sympathizes with Hamas, supports the Muslim Brotherhood and condemns the army that overthrew Mursi, crossed their territory. In fact, it was not Erdogan himself who canceled the visit to Gaza, but canceled his new leadership of Egypt. Against this background, the al-Qaeda leader Ayman al-Zawahiri’s remark sounded loudly, accusing the “crusaders” and “atheists” in the person of the United States and the West of plotting against Mohammed Mursi. It turned out that the military, who came to power in Egypt not without the secret approval of Washington, fought off one of the NATO and American allies in the region - Turkey. There was little R. T. Erdogan’s unrest over the Gezi Park and the Syrian refugees — now also foreign humiliation. And for the United States, this refusal of Cairo (most likely, coordinated with Washington) is just convenient: strengthening of the external relations of Hamas is not necessary for either Obama or Netanyahu. 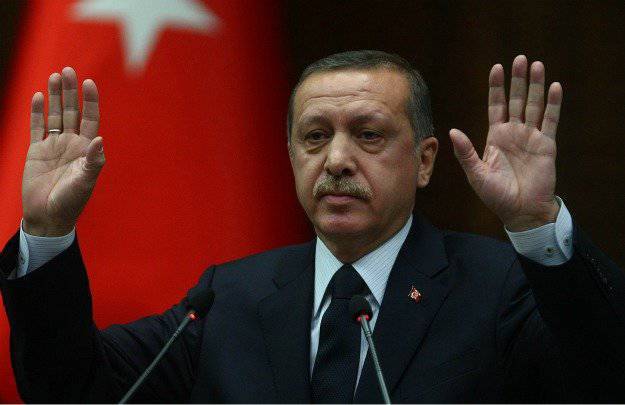 As recalled 9tv.co.il, R.T. Erdogan has long been going to visit Gaza, despite fears from the United States that his visit could strengthen Hamas. The Turkish Prime Minister’s sympathy for Hamas dates back to the Mavi Marmara incident in 2010.

In 2012, the power in Egypt through democracy and Washington’s applause was in the hands of the Islamists from the Muslim Brotherhood movement (the 9 channel calls them Erdogan’s ideological associates). Prime Minister began planning his visit to Gaza. However, in the spring of 2013, the trip had to be postponed. Tom found two reasons at once: the request of the US Secretary of State and the well-known apologies of Israel.

At the end of May, mass protests began in Turkey (in Istanbul and then in other cities), and the visit again had to be postponed.

While the prime minister was engaged in establishing order in his own country, Mohammed Mursi became a tiny part of Egypt’s historical past.

And now the Egyptian media write that the Egyptian authorities canceled the scheduled visit of the Prime Minister of Turkey to the Gaza Strip.

The reason for the cancellation of the visit, writes newsru.co.il, there was dissatisfaction with the new government, firstly, with Erdogan’s statements in support of Mursi, and secondly, with the statements of the prime minister about the military coup in Egypt.

There is another point of view about the cancellation of Erdogan’s visit. She leads the site of the Israeli television channel Arutz Sheva. As notes RIA News", the Turkish authorities did not officially confirm the cancellation, but one of Erdogan’s advisers wrote on the Facebook page that the visit was canceled due to the unrest in Egypt.

"Lenta.ru" With reference to The Times of Israel and Egyptian media, the Prime Minister of Turkey can only enter the Gaza Strip from Egypt, while the Egyptian authorities refused to accept R. T. Erdogan on their territory. So far, neither Turkey, nor Egypt, nor the Palestinian authorities officially confirmed the cancellation of the prime minister’s visit to Gaza.

The decision to refuse the Egyptian authorities explained that R.T. Erdogan supports the Muslim Brotherhood - an organization that "harms the Egyptian people."

This is the version that seems closest to reality. Moreover, Erdogan was not denied the right to set foot on Egyptian territory.

Yemeni activist and Nobel Peace Prize laureate Tavakul Karman was also banned from entering Egypt. Everything is simple and clear: this lady flew to Cairo to join the sit-in strike of supporters of Mohammed Mursi.

The human rights activist was not allowed into the territory of Egypt. Pocket had to fly away from Cairo airport on the same plane on which she arrived in the country, according to "Days. Ru" with reference to the RIA "News».

According to one representative of the Muslim Brotherhood, the activist had previously participated in demonstrations with demands to restore Mursi at the highest government post.

Such a beacon of democracy as Ayman al-Zawahiri joined the unfriendly chorus of protesters against the overthrow of Mursi. This man recently opened a conspiracy of the Crusaders and atheists.

The head of al-Qaeda has accused the United States of plotting the overthrow of Mohammed Mursi. Statement of this, reports "Lenta.ru" with reference to France-Presse, az-Zawahiri made during the audio message, released on August 3.

The removal of the Egyptian president from power, he said, was organized by “crusaders, atheists and the Americanized army with money from the Gulf countries and at the behest of the United States.”

As for the Muslim Brotherhood, it is reported "Vesti" With reference to ITAR-TASS, 25 will initiate a trial in Cairo on a number of Islamist leaders in August. The court will consider the case of the collision at the headquarters of the "Brothers" in the capital district Mukattam 30 June, which resulted in the death of sixteen people. Among the accused is Mohammed Badia, the Islamists' spiritual mentor, who is now on the wanted list, as well as the second man of the Brothers, Heirat ash-Shater. The number of the accused includes the representative of the senior management of the organization Rashad Bayoumi. The last two were detained after the removal of Mursi from power.

Thus, Erdogan, sympathetic to Islamists, was caught between two fires: the United States and Israel, on the one hand, and the new Egyptian government, on the other. If Mursi called for jihad in Syria and, I suppose, shared Erdogan’s convictions, who called the Syrian President 2013 in the spring a “butcher” and a “murderer”, then the new leadership of Egypt, with whom the United States is not going to break relations, refers to Islamist statements with great suspicion. Therefore, Erdogan will not soon get to Gaza, if he gets into his position at all ...