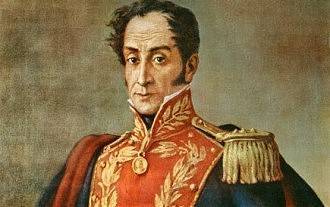 Full names of various countries are sometimes quite unusual. For example, Bolivia is officially called the Plurinational State of Bolivia, Mauritania and Iran emphasize that they are not simple republics, but Islamic. The Republic of Macedonia added “Former Yugoslav” to its name - so that they would not be confused with the Greek region of the same name, Mexico is in fact the Mexican United States, and the small Nepal, lost in the Himalayas between India and China, is not just democratic, but also a federal republic. As for the Republic of Venezuela, the first word in its name is the Bolivarian.


In principle, it is not surprising that at once the two South American countries immortalized in their name the memory of Simon Bolivar, who was given the unusual title of the Liberator (El Libertador) during his lifetime by the Venezuelan National Congress. After all, he really managed to become the creator of several modern states at once, which he literally wrested from the tyrannical power of the Spanish crown.

At the beginning of the 19th century, the whole of South America, with the exception of present-day Brazil, belonged to Spain and was governed by the governors of the king. The metropolis overseas led as best she could, but it didn’t work out very well for her. The real power belonged only to the white minority (while the majority of the population were descendants from mixed marriages), entrepreneurship faced numerous prohibitions, and high taxes led to the fact that they drained all the juices from the colonies.

This alone could be a significant cause for discontent, and it manifested itself, especially under the influence of the US Revolutionary War, the French Revolution and the slave uprising in San Domingo. With these examples, South Americans were personally convinced that they could successfully fight for their rights, and the royal government is not so holy and unshakable. But the immediate cause was the invasion of Napoleon Bonaparte’s troops in Spain, which followed in 1808 and led 2 to the occupation of most of the country by France.

The fact that Bolivar has become one of the leaders of the “patriots”, as independence advocates called themselves, is not surprising. Unlike many compatriots who never crossed the ocean, he personally met the life of the Old World.

Simon was born 24 July 1783, in Caracas, in a noble Creole family, was left without parents early and was raised by the famous educator Simon Rodriguez, who became for him not only a mentor, but also a friend. In 16 years, on the initiative of his relatives, he went to Madrid, where he studied law, and then traveled around Italy, Switzerland, Germany, England and France, and also visited the United States of America, who had by then freed from British power. Perhaps it was there that Bolivar first thought that South America needed to throw off the heavy yoke that the metropolis had imposed.

When uprisings began from Mexico to present-day Bolivia, the Spanish army was able to quickly suppress them. But a start was made - only the leader was missing. They turned out to be Bolivar, who took the most active part in the overthrow of Spanish rule in Venezuela, which became an independent republic in 1811. But the rebels were eventually defeated, and although in 1813, Bolivar’s troops again occupied Caracas and proclaimed the Second Venezuelan Republic, he was unable to carry out reforms that would allow him to enlist the support of the people, and was forced to flee to Jamaica.

The war for the liberation of South America continued long 16 years - until 1826-th, and if the famous San Martin led the rebel forces in the lower part of the continent, Bolivar acted in the north.

He returned to his homeland at the end of 1810 and again achieved the partial liberation of Venezuela - not least due to the promise to give his army soldiers land. Then the Spaniards were expelled from New Granada (present-day Colombia), and in 1819 Bolivar was proclaimed president of the Republic of Colombia, which included Venezuela, New Granada, and a little later - the current Ecuador. The beginning of the 20-s was marked by several loud victories over the forces of the empire, and in the middle of the 1822-th army of Bolivar and San Martin met for the first time on the territory of modern Peru. Finally, in the 1824 year, Venezuela, still in 1811-m declared its independence, was completely liberated from Spanish rule.

Bolivar, in principle, did not hide the fact that he would like to unite the former viceroy kingdoms, but on the same democratic principles. Colombia, Peru, Bolivia, La Plata, and Chile were to enter the Southern United States, but they could not insist on their idea of ​​a military leader. He was greatly respected, but local politicians, who felt a taste of independence, suspected that over time he would want to create his own empire, like Napoleon’s.

Whether he really had such thoughts is still unknown. But, be that as it may, the union of the liberated colonies was short-lived, Peru and Bolivia left it, and as a result, Bolivar had to be “content” with the territories of only modern Colombia and Venezuela. At the end of 1829, a split was also made between these countries, and at the beginning of 1830, Bolivar resigned from the presidency, and in December of that year, he died, giving up all his lands, houses, and even the state pension.

Most likely, those who believe that the power of the Spanish king Bolivar intended to replace his own dictatorship are hardly right. After all, suffice it to say that as a result of the war for independence of the South American colonies, he managed to break the bonds that hampered the economic development of the entire continent, and the local equivalent of corvee for indigenous people was abolished, and slavery was eliminated in most of the newly formed countries. In the new states a parliamentary form of government was established, constitutions were adopted. There were nations that got rid of the remnants of feudalism and received the opportunity for independent development.

Bolivar was not afraid to challenge the mighty empire, and perhaps it was no coincidence that it was his fellow countryman, Venezuelan President Hugo Chavez, did the same, becoming one of the few leaders of the modern world who allowed himself to harshly criticize the US - the new "world dictator". Apparently, the “vaccination of freedom”, made in the first quarter of the XIX century, turned out to be really strong ...

Ctrl Enter
Noticed oshЫbku Highlight text and press. Ctrl + Enter
We are
Yugoslav operationArmored vehicles of Yugoslavia. Part of 8. The current state. Bosnia and Herzegovina. Serbia Macedonia Montenegro
15 comments
Information
Dear reader, to leave comments on the publication, you must to register.