West as a threat to Poland 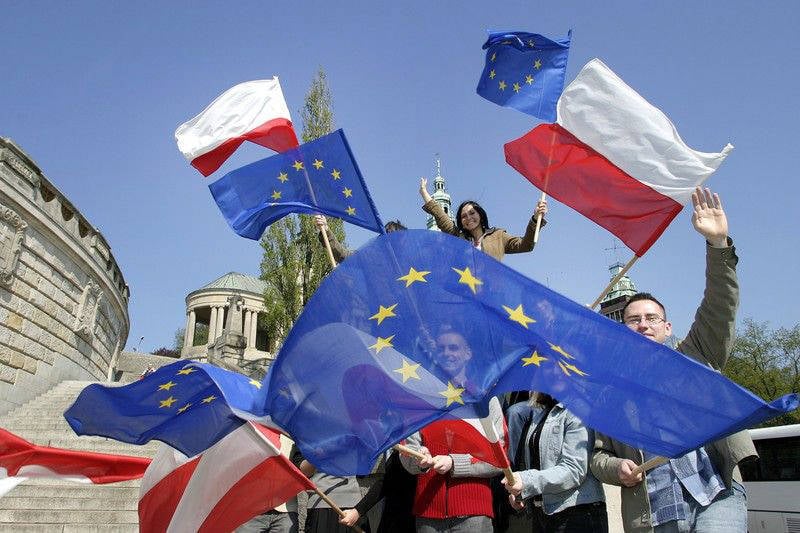 In May of this year. Vice President Joe Biden expressed his gratitude to Jewish leaders for their contribution to changing the attitude of American society towards same-sex marriages. “Culture and art change people's opinions,” said Biden, pointing out that 85% of success is the work of Hollywood and the American media.


These words did not go unnoticed by the opposition forces in Poland, which over the past decades has been a staunch ally of Washington and supports all its political undertakings. Official Warsaw is quite predictably not in a hurry to comment on perverse US initiatives in the field of family values, even if these initiatives are used by the American politicians in the usual way all over the world. Also quite predictably silent parliamentary opposition parties. Instead, they say those whose voice does not sound from the rostrum of the Sejm or the Senate, but is heard on the streets of Polish cities. The Poles, as a deeply religious Christian people who observe Catholic values, are not enthusiastic about the attempts of their American friends on the foundations of the Polish family.

"Our" Mirdia "[pun: merde - fr. shit] are involved in wild attacks on Putin, who support legislation that protects Russian society from the destructive influences of the homosexual minority ..., ”the Patriotic Movement of Poland bulletin informs and gives happy examples of destructive Western policies to promote homophilia (2).

Thus, the Committee of Ministers of the Council of Europe was presented a paper on the policy of the French authorities to overturn “sex stereotypes” in children older than 6 years. With 2013, a mandatory educational program based on gender ideology is planned to be introduced in French schools. Gender ideology in Western countries is different in that it inspires the younger generation to believe that social differences between the sexes are an unnatural product of public education.

Professor and Priest Pavel Bortkiewicz, Director of the Center for Ethics of the University. A. Mickiewicz, argues that the main goal of this policy is to destroy the institution of the family: “... homosexuality is not illegal today. But we are witnessing the problem of its institutionalization, the equation of homosexual relations with the institution of marriage ... Genderism entered the arena along with radical feminism ... The Beijing demographic conference ended with conclusions in favor of abortion, contraception and sterilization. The next conference in Beijing on women's rights ... ended with the same conclusion: abortion, contraception, sterilization. At the climatological conference in Copenhagen, the thesis was advanced that excessive population growth leads to global warming. And, therefore, again - abortion, contraception, sterilization ”(3).

According to prof. Bortkiewicz, homophilia has already made an impressive leap, ascending to university departments, has penetrated into academic circles as a subject of study, which gives every homosexual theories a "certificate of respect." Now there is a process of active penetration of these theories into the political and legal field of Europe and America.

Poles, who always considered themselves to be Western civilizations, are very disturbing. Moreover, the harmful trends penetrate the Polish state: for the first time in Poland, in the city of Lodz, discounts are provided for LGBT representatives in hotels. The action was supported by Polish Radio and a number of public organizations.

Poland faces the problem of population reduction. Young Poles emigrate to Western Europe, and only a few of them come back. The number of newborns decreases, the number of divorces increases. According to the Central Statistical Bureau, this year the number of deaths exceeded the number of births on 21 000 (4). Against this background, the promotion of homophilia can lead to irreversible consequences.

Polish intellectuals are trying to find a way out of this situation. The lack of family policy, insufficient financial support for newborn families is only the tip of the pyramid, superficial signs of deeper problems. Poles will have to revise the entire system of public-state relations, which is a titanic task. Poland, taking the Western liberal theories of the development of society as an axiom, partially sacrificed its own civilizational uniqueness. The collective culture of the West (USA + Western Europe) is a more powerful intellectual and ideological construction than Polish culture, belonging to one state and one people. Therefore, Polish culture began to lose ground under the onslaught of Western culture, which should be understood as the domination of Anglo-Saxon cultural dogmas.

In the beginning, after the collapse of the Soviet bloc, this was perceived uncritically. The philosophical theories of liberal individualism, according to which there is nothing integral, and the whole can be divided into autonomous parts and each of them has untouchable sovereignty, once laid the ideological basis for the decomposition of once-Western collectivist society into individuals, which is reflected in politics, economics, culture . The same thing happened to nations that fell under Western intellectual influence, especially in Eastern Europe. Beyond the decomposition of the collective into its component parts, the logical continuation was the desire to go beyond the boundaries of the individual himself and to decompose it into parts. Hence loyal attitude towards homosexuals, trans and bisexuals, who are “two in one” (an individual who transcends his psychological boundaries and changes his essence to the opposite). According to Edmund Adamus, director of the Department of Marriage and Family Life, Westminster Diocese (Great Britain), the Frankfurt School (5) stands behind the rampant "homoterrorism and attempts to dismantle the family."

The Frankfurt School is the collective name of the philosophers who worked at the Institute for Social Research at the University of Frankfurt am Main (G. Markuse, E. Fromm, T. Adorno, M. Horkheimer, and others). With the coming to power of Hitler, the "Frankfurt" moved to the United States. According to E. Adamus, representatives of this school subjected to destructive criticism of the foundations of statehood, did not recognize the authority of traditions, believed in the artificiality of any psychological boundaries in a person’s world view, sought to overcome them, loyally treated “pansexual” theories that did not recognize obstacles to satisfaction of sexual urges, denied the right to be a judge of his actions, etc. Representatives of the Frankfurt School had considerable intellectual authority, because they dealt with a whole range of pressing issues in their activities - from economics to politics, and with this they were able to charm many “searching intellectuals”, including both in Poland and in Russia.

But today, Polish intellectual circles are turning more to the traditions of Catholicism, with its strong family institution and socio-religious hierarchy. The ancient cradles of the Catholic faith — Spain, Italy, France — are gradually losing ground under the pressure of American gay politics. Even the traditionally Catholic South America is losing ground, and perverts can already adopt children in Uruguay, Argentina, and Mexico. Among the Catholic countries of Europe, Poland is almost alone, trying to preserve its family and cultural heritage. As a people with strong Catholic traditions, in the political sphere Poles easily go to rapprochement with the West, but in the sphere of religious traditions they still retain their own face. The future of the Polish people and the Polish state depends on how they succeed.

Ctrl Enter
Noticed oshЫbku Highlight text and press. Ctrl + Enter
We are
About Stalin and KhrushchevInterview by President Bashar Al-Assad to the Sunday Times
Military Reviewin Yandex News
Military Reviewin Google News
66 comments
Information
Dear reader, to leave comments on the publication, you must to register.