July 28 2013
335
This year, the Russian Orthodox Church and the entire Russian World celebrates the date of the 1025 anniversary of the Baptism of Russia - the key moment stories Russia. This article is written in simple and understandable language and is intended to tell about the fate of Saint Prince Vladimir - the Baptist of Russia and the benefits that Baptism brought to the entire emerging Russian state. 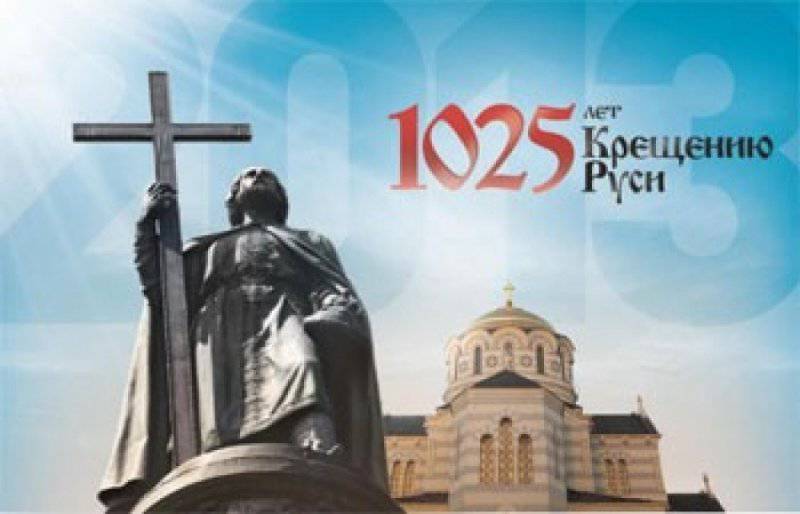 The adoption of Christianity by the holy Prince Vladimir, the baptism of the Russian people by him is a feat equal to the feat of the holy apostles, therefore the Holy Church calls the holy prince equal to the apostles.

The grandson of the holy Princess Equal-to-the-Apostles Olga, in his youth Prince Vladimir was a fierce pagan, a cruel warrior, a lover of women and wine. His miraculous transformation into the holy ruler of Russia is even more surprising.

The beginning of the miraculous change was the tragic episode of the death of the first Slavic martyrs for Christ. The pagan custom demanded from the ruler a bloody sacrifice to the Slavic deity Perun after a victorious campaign against the Yatvägi. A lot was cast, which fell on a boy named John. His father Theodore refused to betray his son, declaring his Christianity. An angry mob brutally killed father and son, who became the first martyrs of Russia.
While dying, the martyr Theodor said: “You are not gods, but you have a tree now, but tomorrow they will rot ... God is one, who created heaven and earth, stars and the moon, and the sun, and man” [1].

The bloody sacrifice made a deep impression on the prince, becoming one of the reasons for finding a new faith.

As a wise politician, the prince understood that the wildness of paganism had outlived its age. Raught behavior, the lack of unity of people, every tribe, every kind of which worshiped their deities, cannot bring the Slavs the necessary power. The prince had already tried to rally the people, having carried out a reform of paganism, calling for believing in the idols set on Kiev hill. Nothing happened. Human blood has not given a solid foundation to the Kiev state. Modern realities demanded cohesion and high morale of citizens. Then the prince sends ambassadors to all large states bordering Kievan Rus.

The ambassadors from Khazaria arrived - the Khazar rulers-Jews. The prince asked them about the fate of the state of Israel. Upon learning of his death, Vladimir refused to accept Judaism.

The prince rejected the offer to accept Islam, because this belief forbids drinking alcohol and eating pork, and fat and low alcohol drinks are the basis of food in military campaigns of the Slavic state.

Prince Vladimir rejected Latin Christianity, trusting in the wisdom and political instinct of Grandma Olga, whom he and his army revered as the wisest of women.

Greek Christianity attracted princely ambassadors with the orderliness and beauty of divine services, magnificent architecture and art. At the reception the monk preacher showed the prince an icon depicting the Last Judgment. The sad fate of sinners and the eternal joy of the righteous left a deep mark on the soul of the future saint.

The fact that the holy princess Olga was a Christian also influenced the princely decision. The famous church historian, Professor Golubinsky, notes that the grandmother of Prince Vladimir, a woman of state of mind, accepts Christianity, including from state motives:

“The reference to the fact that Christianity became the faith of almost all the peoples of Europe and, in any case, the faith of the peoples between them is the best, is an indication that a strong movement towards it began, like other nations, between its own relatives (Varangians) could not act on Olga's mind, making it necessary for her to conclude that people have the best and faith should be the best ”[2].

The Byzantine Empire is a mighty ally, a state with a great culture, developed science and technology. It was only necessary to wait for the right moment to conclude a union and accept Christianity. Such a case presented itself soon.

In 987, Prince Vladimir renders military assistance to Byzantium in suppressing a military rebellion in exchange for the promise of baptism and marriage to the Emperor's daughter Anna. The cunning Greeks decided to deceive the prince. In response, he captures Chersonese - the ancient Black Sea port - the basis of Greek influence in the Black Sea region. Then the Emperor sends Anna to Chersonesos, wishing for a peaceful outcome of the conflict. The political opposition of Russia and Byzantium could cast a shadow on the adoption of Christianity. The Greeks tried to impose their power on all who were baptized, the Slavs tried to preserve their freedom.

Then the prince, by the will of God, loses his sight. This was a real shock, both for Vladimir and for his troops. A few days later, the Byzantine Princess Anna arrives in Chersonesos and advises her future husband to immediately accept Holy Baptism so that he can be healed from illness and be able to get married with her according to the Christian custom. At the time of the sacred Mystery, the prince regains his sight, not only physical, but also spiritual: the heart, full of cruelty, debauchery and love to drink, is reborn into the dwelling of the Holy Spirit. 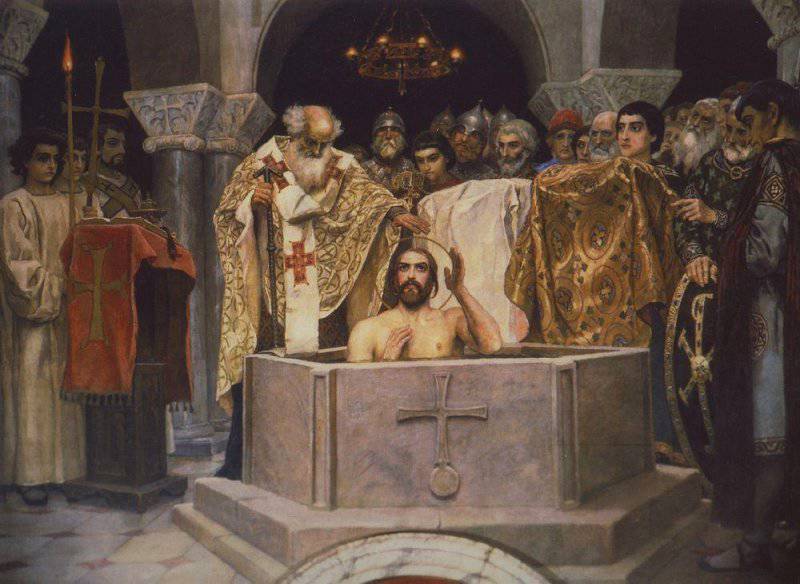 Thus, the great holy Russia was born, clearing not only his soul from the pagan sinisterness, but also the soul of his people.

In 988, the most mass baptism of Slavs in the history of Russia took place on the bank of the Dnieper. The prince declared: “If someone does not come to the river tomorrow — be it rich, or poor, or beggar, or slave — then he will be my enemy” [3]. This meant that those who disagree with the princely will can collect their belongings and look for a new home in another state. However, the chronicler notes that the common people gladly accept the princely will: “When they heard this, the people went with joy, rejoicing and saying: If it were not good, our prince and the boyars would not accept it” [3].

After a short time, Kievan Rus was baptized.

Modern man is difficult to grasp the breadth and risk of this step. What is worth one mention of the chronicler that the idol of the main deity of the pagan pantheon of Perun did not dare to destroy before the eyes of yesterday's pagans, and publicly whipped up, cut down and allowed to sail with the flow, not allowing to pester.

These events - the Baptism of Russia and the overthrow of paganism became the beginning of the renewed Russian statehood. In the history of the state there will be many more dark pages, misfortunes, evil, but Russia will no longer be pagan. 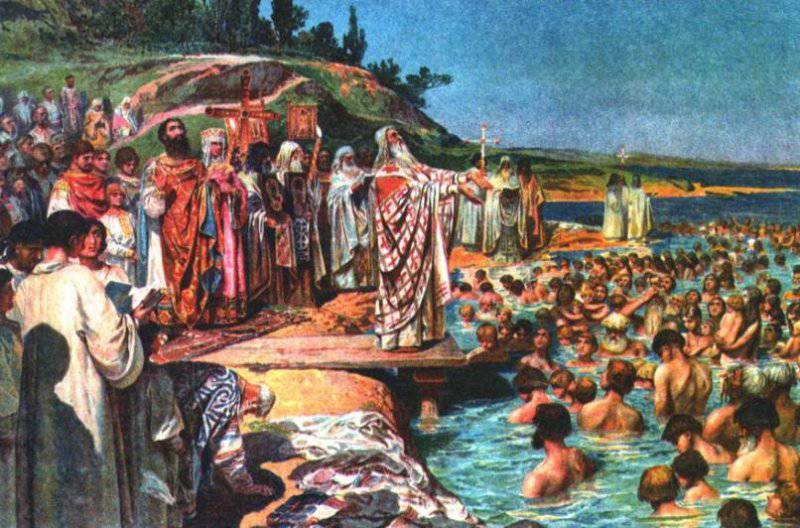 Chroniclers - impartial witnesses of history will not hush up evil, but will denounce vice, with the help of God's Law call black black and white white. It is precisely the high morality brought to Russia by the faith of Christ, the constant special concern of God for people who believe in Him, the desire of the inhabitants of the Orthodox state to please God with all its might, became the foundation of the inviolability of the Russian state.

Becoming a Christian, the holy Prince Vladimir remained in the memory of the people of Vladimir "Red Sun" - the best ruler of Russia. By his example, he showed the people how to live.

Mercy to the subjects, constant alms to the poor, rich contributions to the welfare of the Holy Church, the construction of temples, reliable protection of the state, the expansion of its borders - all this attracted people to him.

At the age of about 60 years, which by the standards of those times was considered a very old age, Holy Prince Vladimir peacefully departed to the Lord.

His sacred remains were entrusted to the tomb of the Tithe Church, built in honor of the Assumption of the Most Holy Mother of God on Kiev Hill - the site of the murder of the first martyrs Theodore and his son John.

So, what gave Kievan Rus the adoption of the Christian faith? The answer to this question contains an academic history textbook of the Russian history department of Moscow State University. Lomonosov:

On a personal level, Christianity has put every person’s personality on a completely new quality level: “Christianity with its idea of ​​eternity of human life (mortal earthly life precedes eternal staying in heaven or hell of the human soul after his death) asserted the idea of ​​equality of people before God. According to the new religion, the way to paradise is open to both the rich nobleman and the commoner, depending on the honest fulfillment of their duties on earth. ”

At the level of society, Christianity has become a state forming religion and ideology:

“God's servant, the sovereign was, according to the Byzantine traditions, a fair judge in domestic affairs, and a valiant defender of the borders of the state. The adoption of Christianity strengthened the state power and territorial unity of Kievan Rus.

It was of great international importance, which consisted in the fact that Russia, having rejected primitive paganism, was now becoming equal to other Christian countries, ties with which had greatly expanded.

Finally, the adoption of Christianity played a large role in the development of Russian culture, which experienced the influence of Byzantine culture, through it, and ancient culture. ”

Sources and literature:
1. Holy Russia. Orthodox calendar for 2011 year with reading for every day. - M .: Russian Chronograph, 2010.
2. Prof. Golubinsky, E.Ye. History of the Russian Church. Quoted according to art. "The Death of Blessed Olha", the site of Orthodoxy.ru.
3. Tale of Time Years. www.abc-people.com
4. A. S. Orlov, V. A. Georgiev, N. G. Georgieva, T. A. Sivokhina, History of Russia from Ancient Times to the Present. Textbook. - M .: Prospectus, 1997.

Ctrl Enter
Noticed oshЫbku Highlight text and press. Ctrl + Enter
We are
Congratulations on the 285 anniversary of the birth of the Great Russian commander Alexander Vasilyevich Suvorov!"Idea Olga in the Greeks." Russian-Byzantine relations during the reign of Olga
Military Reviewin Yandex News
Military Reviewin Google News
335 comments
Information
Dear reader, to leave comments on the publication, you must to register.