In the Kremlin, Vladimir Putin awarded the Order to General Makhmut Gareev 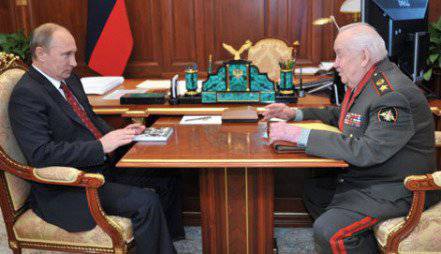 Russian President Vladimir Putin presented the Order for Services to the Fatherland, Third Class, to Army General Makhmut Gareev in his Kremlin office today. Upon entering the president’s office, the general reported: "Army General Gareyev arrived to present on the occasion of his 90 birthday anniversary." Addressing the hero of the day, the commander-in-chief said: “You have done so much for the country and for the Armed Forces that I want to thank you for it. You are one of our most famous military leaders. You participated in the liberation battles in Belarus and Poland, in the Far East You still conduct a great social and scientific activity. You do a lot to preserve the truth about stories Armed Forces, War. "


General Gareyev presented his latest book, Simonov as a Military Writer, to the President and thanked the President on behalf of the veterans for caring for them.

Makhmut Akhmetovich Gareev was born on July 23, 1923 in Chelyabinsk. In 1941 he graduated from the Tashkent Infantry School. He served in the Soviet army for more than 50 years. Member of the Great Patriotic War - fought on the Western, 3rd Belorussian and 1st Far Eastern fronts. He was wounded and shell-shocked several times. In the postwar years he graduated with honors and a gold medal from the Military Academy. Frunze / 1950 / and the Military Academy of the General Staff / 1959 /. He served in various command and staff posts in the Far Eastern, Belorussian and Ural military districts. In the Belarusian military district, commanded a regiment, a motorized rifle and training tank divisions, was the chief of staff of the combined arms army, then served as chief of staff of the Ural Military District, head of the Military Scientific Directorate and deputy chief of the Main Operations Directorate of the General Staff of the USSR Armed Forces. He worked in the military-diplomatic direction: in 1970-71 he was the chief of staff of the Chief Military Advisor in Egypt and in 1989-90 - military adviser to the president, Supreme Commander-in-Chief of the Armed Forces of the Republic of Afghanistan. Last position - Deputy Chief of the General Staff of the USSR Armed Forces. Army General.

The author of the books "Tactical exercises and maneuvers", "Combined arms exercises", "MV Frunze - military theorist", "Military science", "If tomorrow is war", "Outlines of the armed struggle of the future" and many others, as well as a series of essays about the front commanders of the Great Patriotic War and more 200 scientific works on the methodological problems of military science, the theory of military art, methods of military training and education, military history, published in the USSR, Russia and abroad.

Laureate of them. Frunze and the State Prize of the Russian Federation. Zhukov. Doctor of Military Sciences, Doctor of Historical Sciences, Professor, Full Member of the Academy of Sciences of Tatarstan.

Ctrl Enter
Noticed oshЫbku Highlight text and press. Ctrl + Enter
We are
Avakov reported on the transfer of the National Guard of Ukraine "Shrek" and other equipmentOrder "For Services to the Fatherland" awarded by the head of the Russian Foreign Ministry Lavrov
Military Reviewin Yandex News
Military Reviewin Google News
13 comments
Information
Dear reader, to leave comments on the publication, you must to register.