Communists want to "merge" the government of Medvedev 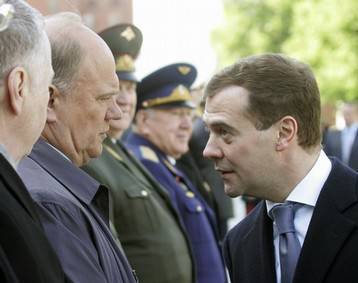 
The fact is that the top of the Communist Party, headed by its permanent leader Gennady Zyuganov, launched an initiative to collect signatures in support of the idea of ​​the resignation of the Cabinet of Ministers headed by Dmitry Medvedev. The leader of the Russian Communists set the task to collect more than a million signatures, using for this party activists in various parts of the country. Why exactly a million? In the Communist Party of the Russian Federation they say that in the current Duma, the majority begins to wake up only when it sees six figures in front of it ... In other words, if you provide thousands of signatures required by the 100 law, few people from the ruling party will be impressed and the initiative can go along with captions. But whether or not the initiative, which can be supported by more than a million Russians, will go or not go - this is a separate question.

The task of collecting a million signatures to someone may seem too ambitious, but given the far from the most impressive ratings of the government, it can be implemented in a relatively short time. If you believe the data of the Levada Center (you can, in principle, not to believe), then the rating of the Dmitry Medvedev government is the lowest among all the governments of the last 13 years. According to a study by the organization, about 50% of Russians today believe that the Medvedev Cabinet is working, quote: “not very effective,” and about 13% states that the Government is ineffective at all.

So that the material does not seem to be biased, let us present the VTsIOM data regarding the level of confidence in the current government. These data are as follows: 42% of Russians believe that Dmitry Medvedev's Cabinet of Ministers has not demonstrated any achievements during its work. At the same time, more than 58% stated that they did not expect anything good from the work of the current ministries. As a result, VTsIOM published a general assessment of the work of the government by the Russians on a five-point scale. This rating corresponds to approximately 3,2 points. As school teachers say: pulled out by the ears ...
If you believe the representatives of the Communist Party themselves, then Zyuganov’s initiative only in the first few weeks after her dubbing was supported by about 300 thousands of Russians, and the list of signatures continues to grow every day.

In the State Duma itself (it should be noted - the vacation Duma) for the resignation of the current government, which at one time President Putin offered to give time to work, because the year - the deadline for assessments is too short, people spoke 102, of which the 92 legislator directly represents the Communist Party another ten are the fair Russia, which deviated from the "general line" of the party leader. In order for a question initiated by the communists to come up for discussion in the State Duma, you need to enlist the support of 90 deputies (everything worked out here), but to make the main decision you need at least 50% + 1 vote, then 226 votes of deputies.

Let us turn to the party composition of our Lower Chamber. On 450, the lawmakers of the representatives of the Communist Party are 92 people, Fair Russia - 64 people, the Liberal Democratic Party - 56 people, United Russia - 238 people. Attention! Question! Will the initiative of Gennady Zyuganov go towards the resignation of the government of Dmitry Medvedev, if in the current Duma the majority of deputies represent the very party that Medvedev heads? .. To be sure that the initiative will pass, you need to be either a very confident person , or a final romantic in pink glasses by nature ... Hoping that there will suddenly be a crack in “United Russia”, which will lead dozens of deputies to vote for the resignation of the government, in which Dew presented on the leading positions very often, somehow very very naive. Well it is to chop the bough, on which, at a minimum, 238 people's choices and sit.

But on the other hand, Gennady Zyuganov and other supporters of the idea of ​​changing the cabinet of ministers have a chance. This chance is very, very, very small, but it is. What is it? And it lies in the fact that among the deputies from the faction "United Russia" in the State Duma there are also representatives of the "All-Russian Popular Front", which, it seems, is positioned as an exclusively Putin's force. According to the latest data, such representatives in the State Duma of the VI convocation of 85 people, of whom 18 either were or became members of United Russia directly. If we assume that these 85 people suddenly decide that there is no need to support Medvedev and his government, then Zyuganov has already recruited 186 potential associates. Plus he himself. Prior to the motion of no confidence, there are not enough 30 votes. These thirty votes may well appear immediately after the ONF distances itself somewhat from United Russia - there are already flexible Liberal Democrats headed by Vladimir Wolfovich catching up and even, perhaps, the “irreconcilable fighter” Sergey Mironov.

However, in order for several dozen "people's front-line soldiers" to side with the government's resignation initiative, you need one "small" but. This “but” is in the position of Vladimir Putin. If he makes it clear that the opinion of hundreds of thousands (according to the number of signatures collected today), and even more so millions (according to the results of the government confidence survey) is not indifferent to him, then the ONF and all the rest will be untied. And in this case, Dmitry Medvedev will have very difficult. Waiting for the brethren from United Russia to defend him? Well, for this he needs to be just an impassable optimist.

Only now, to expect that President Putin will not be against the resignation of the current Cabinet, to be honest, is not necessary. Separate resignations of ministers - yes. They are quite likely, but the government’s complete discharge with its head is almost unbelievable. But what about the vertical, and what about the built system? This is a whole internal revolution in power, to which she will not go under the current scenario.

By the way, we did not mention the fact that in addition to the strange reform of the RAS, the Communist deputies were concerned. Gennady Zyuganov in one of his recent interviews states that there are more than enough reasons for concern about the work of the current government. This is a growing public debt. The leader of the Communist Party reminds that the current authorities promised to reach a fully deficit budget by 2015, but government documents show that the deficit will reach half a million rubles by 2015. Zyuganov as the government punctures calls the entry (according to him, dragging) of Russia into the World Trade Organization, which has already led to 800 losses of billions of rubles due to penetration of low-quality products of foreign manufacturers and the need to reduce customs duties for foreign companies. The main communist of Russia considers the obvious disadvantages of the work of the government of Dmitry Medvedev to be the reduction in the percentage of high-tech products from the Russian producer, aggravation of dependence on the export of raw materials, unintelligible education reform, inability to maintain economic growth, weak manifestations of the fight against corruption, constantly changing positions of pension reform. If we also add the reform of the RAS, which cannot be motivated even by the Ministry of Education, then the work of the government does not look unintelligible, and even counterproductive. And in this vein, the initiative of the Communist Party of the Russian Federation has a good base.

A number of experts, by the way, speak in the spirit that the initiative (if it is not populist, of course) by the long-lived Russian policy Gennady Zyuganov is the beginning of the end of the tandem. There is an opinion that Gennady Andreevich, who recently became suspiciously seldom to curse the power, did not come to his own initiative. Or he came on his own, but, having initially enlisted the support of "higher powers" (political, of course). If you believe this version, the combination of getting rid of the “partner” for President Putin looks perfect: they say, the Duma opposition has initiated, the people have supported, and I, as president, have only to fulfill the will of the people. But Dmitry Anatolyevich does not believe in it ...

Ctrl Enter
Noticed oshЫbku Highlight text and press. Ctrl + Enter
We are
Results of the week. “What do we need these americans - cow chase ?!”Honey and tar Dmitry Medvedev
Military Reviewin Yandex News
Military Reviewin Google News
159 comments
Information
Dear reader, to leave comments on the publication, you must to register.