Hard life of a Russian official. How to deal with "gray" salaries 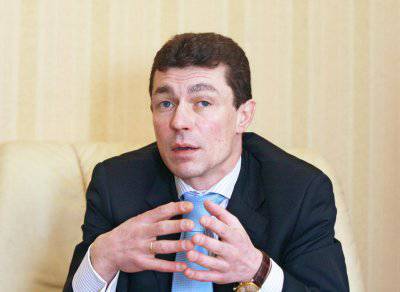 The Ministry of Labor of the Russian Federation resolutely rises to fight gray salaries and, attention! - with a shortage of officials. First, about the officials.


The Minister of Labor and Social Protection Maxim Topilin just recently said that it was necessary to make the public service in the regions of the country attractive. It turns out that today this very civil service cannot literally drive people with a whip, since the salaries of officials in this cluster are very low. Right and said: "very low." Here is a direct quote:

Mr. Topilin, in addition to his concern for the low wages of Russian officials, spoke about other bureaucratic life (because life is stagnation, according to the ideas of Maxim Topilin, you can’t call it, you understand). So the Minister of Labor said that today, officials are generally in a losing situation. Not only were they banned from doing business, they also made their incomes declare ...

According to the logic of the minister, it was precisely this that undermined the desire of the Russians to be built into friendly bureaucratic ranks ... And really, this is what happens! - a servant of the people is oppressed all day long, he cares for the welfare of the average fellow citizen, he is not forced to do business, again he is forced to declare income, and here he also gets pennies ... But such work doesn’t work for anyone ...

What, after all, was the Minister of Labor Topilin, who identified an important state problem! Before his remarks, you and I still expressed some kind of skepticism about the effectiveness of the work of officials of various ranks, and now neither the hand nor the tongue will rise to expose the official. After all, he is literally humpbacking for pennies - well, what, you understand, the demand from him? What are the budget deficiencies, the main thing is that there are no arrears in the bureaucratic offices - that's what's the matter!

Now it’s worth to move somewhat away from Maxim Anatolyevich’s experiences and find out how much our officials (of different levels) get for their work. Maybe Topilin is right? ..

So, if you take the wages of the lowest paid official in Russia - a specialist of the second category of various regional departments, then it amounts to 19400 rubles. These officials are all sorts of clerical assessors who create the very, simply speaking, bureaucratic capacity of any industry. On the one hand, 19400 rubles is really not a fantastic amount. But on the other hand: how much more to pay, excuse me, to the bureaucratic plankton, from the very national (civil) pocket, if the citizen himself is the first to suffer from the bureaucratic barriers being built. Far from every doctor of the district clinic receives such a sum according to the results of their monthly work and not every teacher, librarian, kindergarten teacher, worker. Why does the official’s salary worry Maxim Anatolevich more than the salary, for example, of the same librarian? ..

But we touched upon exclusively the wages of the lowest bureaucratic level. And if you look a little higher? The average salary in the Russian ministries (taking into account the entire bureaucratic staff) steadily keeps at a level above 75 thousand rubles. In the office of the Government and the Presidential Administration, the average salary goes beyond 160 thousand rubles.

Taking into account the whole range of official salaries in Russia, Rosstat publishes information on the average salary of an official in the country. According to Rosstat, this salary is about 60 thousand rubles. If we take into account that the same Rosstat determines the average salary in Russia in the amount of slightly more than 29 thousand rubles, it turns out that the work of the average official in the Russian Federation is valued at least twice as high as the work of the average Russian not from the bureaucratic environment.

So where does Maxim Topilin saw a “low, very low salary,” and what gives him a reason to announce that there is a short supply in the posts of regional officials? If this nedokomplekt really manifests itself, then why did not one of the large services 8 (the author of the article monitored eight services) devoted to the provision of vacancies in different regions of the country, did not reveal civil servant vacancies, unless civil servants consider the traffic police call center one of the major cities of the Volga region ... Perhaps the author has studied an insufficiently large number of resources for job seekers or other jobs, and it is possible that information about the vacancies of civil servants is published on some secret oyyny "platforms that are not available to us. Not that we, you know, blood ...

In general, the torment of the minister in this vein looks, at least, strange ...

Now let us touch upon the question of how the very Minister of Labor, Maxim Topilin, is going to bring to light “gray” salaries.

Gray salaries of Russians Government for a long time. The first real outlines of this concern in the new composition of the Cabinet of Ministers were described by Deputy Prime Minister Olga Golodets, who, we recall, announced: 38 million Russians do not know where and what they do. 38 of millions of people whose incomes are a big secret for state structures is a lot ... Then, however, Mrs. Golodets decided to recount and recounted. According to the logic of its new calculations, it turned out that 18 of millions of Russians from the above-mentioned number are still determined. Among them were housewives who receive childcare benefits, students, draftees, certain categories of people with disabilities. 20, on the other hand, didn’t fall into any of the listed categories, but ate bread and butter ... That’s what caused the Government’s perplexity: they don’t seem to work anywhere, and they’re fed up - it won't work! ..

So that it really did not go, they sent Maxim Topilin into battle. He says that it is necessary to increase the prestige and economic benefits of receiving a “white” salary. As such a benefit, the Ministry of Labor proposes not to issue loans in banks to those who do not pay insurance premiums. In other words, with regard to 20 millions of Russians who did not fall under the microscope of fiscal bodies, it was decided to introduce repression: either pay insurance premiums, or “figvam”, but not a loan ... The first practice of implementing this initiative will show how much this measure will be.

The next initiative of the Ministry of Labor is to increase the minimum length of service for receiving a pension. Now, the Russian citizen, in order to receive an old-age pension, will have to work out a total of 15 years. This, according to the representatives of the Ministry of Labor, motivates Russians to seek and find work, and not to use the opportunities of "gray" employment. True, it does not specify how to be, for example, mothers with many children, because the time for caring for a child for some time is not included in the seniority. This option, for some reason, has not yet been taken into account ... I would like to hope that they will take into account, because any mother with many children a priori brought more benefits to the state than the person who just ordered a phony employment record book with the necessary experience for themselves ...