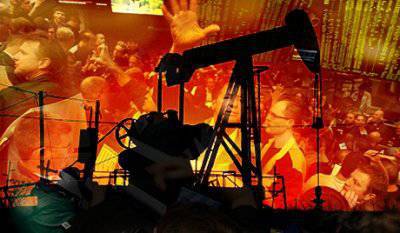 On July 17, there was a slight increase in the main quotations on the New York Stock Exchange. The Dow-Jones, S&P and NASDAQ indices rose, and Mr. Ben Bernanke promised the American economy all sorts of pleasant prospects. At the auction on Wednesday, oil rose in price. Its rise in price is connected not with the promising forecasts of the Fed chief, but with a decrease in the reserves of "black gold" in the United States. However, the big question is what kind of decline ...


As passed correspondent ITAR-TASS Andrey Bekrenev, oil at auction 17 July rose by 0,48 dollar. This happened against the background of information that last week US oil reserves fell more than expected by analysts.

Futures contracts for oil supplies in September were made at the price of 106,48 dollars per barrel.

Prices rose against the backdrop of data on the reduction of commercial oil reserves in the United States and the Fed report on the continuation of the economic recovery of the country.

According to the US Department of Energy, for the week ending July 12, the country's commercial oil reserves fell by 6,9 million barrels, or by 1,8% (to 367 million barrels). Analysts polled by the Bloomberg agency had expected a decline of only two million barrels.

The reduction of reserves indicates the continued high demand for petroleum products. Hence the rise in prices.

The next morning, July 18, oil prices declined. The reason is now called the increase in fuel stocks in the United States.

Interesting information appeared in the blog "Zero Hedge". The information of this portal is based on the material of the Russian agency. Finmarket.

The blog notes that in the past two weeks, oil reserves in the United States have fallen to a record 20 million barrels. This has not happened in the last thirty years. The situation seems even more strange, given that the trends in the market should have led to an increase in US fuel stocks.

The authors gave some explanations to the latest raw materials phenomenon:

a) the US market is entering a maturity stage: uses less fuel due to higher efficiency and the development of alternative energy sources;

b) the last two weeks of simple refinery capacity turned out to be unprecedented, and supplies were at a record high level.

The two-week domestic production was very high in the country - 7,2-7,4 million barrels per day when imported into 7,4-7,5 million barrels. Last year, imports were higher - 8,6 million barrels. The trend of replacing Saudi oil with American oil is not declining. The authors are at a loss as to where the oil of Saudi Arabia is now: after all, they no longer work there to ship oil to the United States. Nigerian oil, too, "splashing in tankers in anticipation of buyers": after all, the United States began to produce "its oil of better quality and abandoned Nigerian."

Tankers - that's where the dog is buried. Prices for tankers are rising. That is the reason why millions of barrels of oil are stored in ports around the world. This is done for the sake of artificially raising prices. In this way, oil producers are trying to compensate for the increase in US domestic production, exporting less to America.

Another oddity was also highlighted in the material: last week 3 million distillates were produced, but gasoline reserves fell by 2,6 million.

Economists are sure: something is unclean. It is possible that oil has moved from official storage facilities, the reserves of which are recorded in the accounts, to those storage facilities that are not reflected in official documents. For what? There is no clarity on this issue.

“Something ridiculous and most likely illegal is happening in the oil industry, because there is no way to use this oil for the production of petroleum products. The system simply cannot cope with such a volume without a drop in oil imports. ”

The conclusion is made: oil is taken from storage and poured into tankers. In this way, there is a shortage in the transportation market and there is a game for price increase. It is assumed that oil will later be thrown onto the market.

Interestingly girls dance, add on my own. After all, the release of oil to the market by large companies will inevitably lead to the collapse of world prices. Therefore, no analysis logic is visible. However, analysts themselves point out that “something also doesn’t add up on the oil market.” Some kind of game is going on, but which one is difficult to understand. American traders will not give up their goals, otherwise all their plans will lose their meaning.

It can also be assumed that there is a geopolitical background. The United States is ready to start an economic war to bring down commodity prices — in order, first of all, to “kill” rising Russia (following the example of the deprived USSR), additionally punish unbending Iran and establish democratization of Saudi Arabia (and there Qatar). It will not be easy for Iraq, which turned out to be not so accommodating as the bosses from Washington would like. In the Middle East, in full accordance with the theory of controlled chaos, an unprecedented crisis will break out, and the Russian economy, which the World Bank has recently placed in fifth place in terms of GDP, calculated at purchasing power parity, will change to decline. Slates, on which the White House, in regard to both gas and oil, already hopes to be a world exporter of raw materials, indirectly confirm this idea. True, the cost of oil produced from shale is higher than the cost of oil extracted from the subsurface in the traditional way. However, for a market breakthrough that can be conveniently combined with geopolitical expansion, a low price strategy is also appropriate.

Observed and commented on Oleg Chuvakin
- especially for topwar.ru
Ctrl Enter
Noticed oshЫbku Highlight text and press. Ctrl + Enter
We are
Oil has risen in price!Europe is attacking the US economic rake. Will Russia come on them?
29 comments
Information
Dear reader, to leave comments on the publication, you must to register.