The long arm of the State Department reached Turkey?

July 17 2013
27
Turkish riots are usually explained by a variety of reasons. Among the explanations are not so much the authoritarianism of Erdogan, who in the Western media is compared with Putin, or the “Islamist” policy of the government, as the attribution of protests in Gezi Park to the long arm of the White House. Why does Obama wreak havoc in Istanbul and Ankara? Analysts give two answers: Erdogan did not cope with Syria; Erdogan strengthened relations with Iran. For one reason or another, but in recent days, the US has begun to put pressure on its NATO partner: Washington has initiated an anti-dumping investigation against Turkish pipe companies. Ankara, in turn, at a meeting of ambassadors criticized the United States, and earlier demanded an explanation from the White House about the interception of diplomatic missions. Interestingly, with all this, the US State Department calls the relations with Turkey allied and strategic. 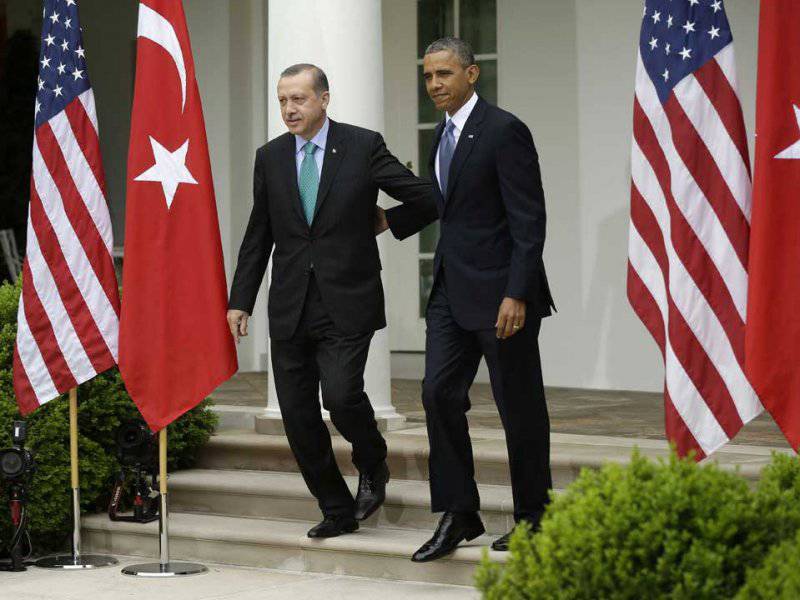 Journalist Dinara Jalilova ("Caucasian policy") believes that unrest is an American punishment prescribed by Turkey for its friendship with Iran. As an argument to this point of view, she refers to a report on the rivalry between Iran and the United States in Turkey, released by the American Center for Strategic and International Studies, authored by Anthony H. Cordesman, Brian Gold, Robert Shelale and Michael Gibbs. Experts cite evidence that under Erdogan, Turkey began to move away from the United States, but closer to Iran. Turkey has already ceased to be a continuation of America in the Middle East and has become an independent and even influential player in the region.

For example, Turkey seems to Washington to be too independent in the military sphere. Along with the purchase of arms, it is looking for alternative suppliers, among which are Germany, Italy, Great Britain, Russia, China and South Korea. Turkey has stopped buying American aircraft with a friend-to-friend recognition system, defining Israeli targets as "their own", which made their attack impossible. Since 2013, Turkey has its own system and can set its own and others.

Having become economically strong, Turkey recognized the Islamic Republic of Iran and began to develop cooperation with it. Erdogan continued the course of rapprochement. If 2008 million Iranians rested in Turkey in 1, then in 2011 there were already 2,7 million. The number of Iranian firms in Turkey grew from 319 in 2010 to 1470 in 2012. To circumvent the US sanctions, Turkey pays Iranian lira gas for Iran buys them Turkish gold, which resells to the Emirates. The United States, in response, sanctioned the ban on the sale of precious metals to Iran.

It must be recalled here that friction in the supply of US weapons to Turkey spilled out onto the level of the White House back in 2010. Almost three years ago, in August 2010, Barack Obama openly demanded that Erdogan change the Turkish political course towards Iran and Israel. The Financial Times quoted Obama as saying: “... some of Turkey’s moves raised congressional doubts about the reliability of Ankara as an ally.” At the same time, Washington didn’t like the fact that Ankara didn’t support UN sanctions against Iran in 2010 in June. Washington found the Turkish voice "against" almost an encroachment on US national security! Well, and threatened not to supply weapons to Turkey. So is it any wonder that Ankara found other suppliers, and also took up production itself?

Since then, something has changed: Turkey’s relations with Israel have become warmer. But the strategic friendship between the Turks and the IRI continues and is growing, despite the American sanctions.

The White House came from the other side.

Rosinvest.com referring to Bloomberg, reports that Turkish steel pipe manufacturers may lose half of their shipments to the United States due to an anti-dumping investigation initiated by the United States.

Mehmet Zeren, chairman of the Turkish Steel Pipe Manufacturers Association, “Turkey with a 4% import share in the US market, or 3,25 million tons of supplies last year, will defend itself at the US Department of Commerce on July 23. We hope that Turkey will be excluded from the study, since we do not subsidize our industry and we do not have dumping. We will try to explain that the use of Eximbank loans to finance trade is not a subsidy. ” According to him, the shares of South Korea and Vietnam in the US market are respectively 25 and 8 percent.

Turkey also made its moves in the game - though not economic, but diplomatic.

In early July, the Turkish authorities summoned to the Foreign Ministry to give explanations to US Embassy employee Jess Baile. "Russian newspaper" with reference to the RIA "News».

He had to comment on the information about the audition of the diplomatic missions by the US special services, published in the press thanks to exposer Edward Snowden.

And the other day, a meeting of Turkish ambassadors was held in Ankara. The opinions of experts about this meeting were cited by Amur Gadzhiev ("Voice of Russia").

Director of the Institute of Strategic Thought, Doctor of Sociological Sciences, Professor Yasin Aktay, in an interview noted that a military coup was carried out in Egypt, and the United States and a number of European countries supported this action. Turkey also took the opposite position, speaking with criticism. The expert noted that Ankara was misunderstood, and said that the Turkish government criticized the position of the world community "fairly." According to him, the United States and the EU countries need to be explained why for many years they demanded democratic reforms from the Islamic world, but now they supported the military coup.

Murat Bilhan, vice president of the Turkish-Asian Center for Strategic Studies and former head of the strategic planning department of the Turkish Foreign Ministry, said in an interview with Voice of Russia that Turkey “just needs to rebuild its Middle Eastern policy. Without urgent and substantial amendments in their foreign policy, the situation in the region will continue to develop not in favor of Turkish interests. ” The expert believes that it is time to revise foreign policy priorities. “In my opinion,” he noted, “during the meeting in Ankara, high-ranking diplomats shared their impressions on this matter. And now, based on their opinions, the government will develop a new Middle East policy. ”

With regard to the riots in Istanbul and Ankara and other cities, on this occasion a representative of the State Department Victoria Nuland spoke a few days ago.

As Namig Huseynov reports (AZE.az) with reference to Anadolu, Nuland stated that the US-Turkish relations are allied and strategic. And they are especially important in view of the US policy in the Eurasian space, in the Middle East and in North Africa.

At first, Nuland praised Ankara: she said that the strength of the Turkish model of democracy is important not only for Turkey, but also for other countries in the region who want to build an Islamic and at the same time democratic state.

Then, speaking of the riots that began with the Gezi Park in Istanbul, an employee of the State Department noted that the United States would continue to remind the Turkish government about freedom of assembly and speech: these are the core values ​​of democracy.

Thus, recent events show that the geopolitical vectors of the United States and Turkey not only do not converge, but often do not go together, which prevents Washington from considering Ankara to be not only a full-fledged strategic partner and a full-fledged ally, but even a democratic country (nevertheless being example for the Middle East). However, Washington, famous for double standards, and does not deserve neither true partners, nor solid allies. Moreover, why would Turkey deny itself the pleasure of pursuing its own policy? Yes, and the times of the US satellites are passing.

Telling Ankara how to behave, the White House is not worried about Turkish security and not about Turkish influence in the region, but about its own geopolitical interests. With Washington, this is simple: he is used to using everyone - just about as toilet paper. And Barack Obama doesn’t like it when a soft piece of paper suddenly turns into an emery "pelt" ...

Ctrl Enter
Noticed oshЫbku Highlight text and press. Ctrl + Enter
We are
Who blew up Turkey? The explosion in Istanbul and the "wave of terror" on Turkish soilResults of the week. "Excuse me, did I, too, chapel ...?"
Military Reviewin Yandex News
Military Reviewin Google News
27 comments
Information
Dear reader, to leave comments on the publication, you must to register.