July 16 2013
87
I can not get past the Sunday incident with the egg, which occurred in the area of ​​residence of racially correct Ukrainians. This is the hero-city of Lutsk. Polish President Bronislaw Komorowski arrived to pay tribute to the compatriots who were brutally murdered by OUN in 1943 year. Those tragic events are known as the Volyn Massacre. According to Polish and Ukrainian historians, more than a hundred thousand Poles were killed in July alone. According to Freedom, intellectually gifted, peace-loving "warriors" were forced to defend themselves against aggressive Poles. The degree of confrontation before the arrival of Komorowski was extremely high. 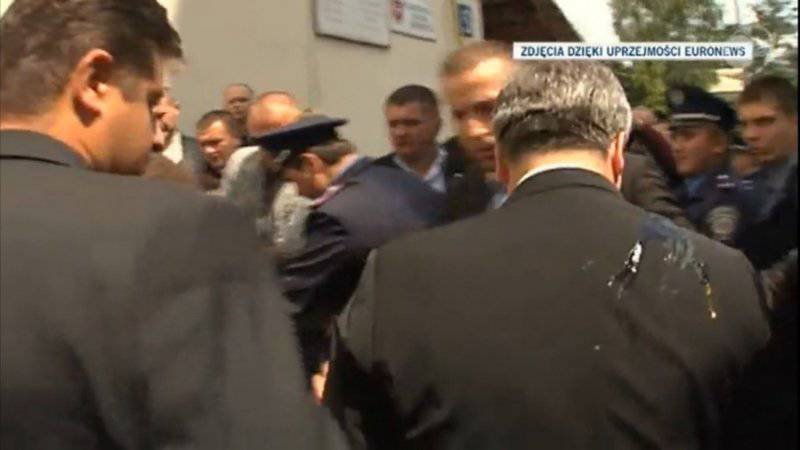 Especially when you consider the resolution adopted on the eve of the visit by the Polish parliament. Even in a softer version (“signs of genocide,” rather than the genocide of the Poles), it caused a whole storm of negative emotions among the “Svobodovtsy”. According to our sources, the representatives of this malignant organization literally went crazy with anger, offered to inflict physical violence, if not on Komorowski, then at least on members of the official delegation. In the heat of the moment, they even compiled a list of Poles living in the epicenter of the “Ukrainian nation” - in Galicia. In the course of the work they were so carried away that they included in the list Jews, agents of the “communo-Bolshevik regime”, explicit homosexuals, Russians, Gypsies and representatives of other handicapped people. The primary organizations of Freedom in Volhynia offered their central organizations to hold torchlight processions, cut down the fence at the Polish consulate, symbolically prick the checkpoint through the Polish-Ukrainian border with human excrement, hold a demonstration followed by assault on the local police station and beating the communists. This is for you to understand what moods reigned in the environment of racially correct primates.

The weight was in a difficult position. On the one hand, the sponsors forbade him to hold shares. In addition, “Freedom” was practically officially recognized as a terrorist organization that professes racism, xenophobia, anti-Semitism and is a direct “heir” to the fascist criminal groups (OUN-UPA, SS “Galicia”). Yes, softer language was used in the resolutions of the Polish and Israeli parliaments, but the essence does not change. On the other hand - the ordinary cattle from primary organizations eager for action. How to be? The wiggle wisely. He simply disappeared in space and time, providing his press service and deputies otbrehivatsya on this subject. Immediately after being elected to Rada, Oleg laid down "for political preservation." He is about to give birth to real Fascism with the help of his personal midwife, Irina Fahrion, however, in order for the fruit to survive, you must wait. To pretend to be an intellectual who is developing complex, intellectually capacious bills in parliament.


As a result, something happened that inevitably should happen. A certain idiot with a backpack on which “Freedom” was written, according to one version, threw an egg at Komorowski, according to another version - simply pushed it towards him and crushed the egg on his shoulder. He was either 16-18 or 19-25 for years. The Polish president, I must give him his due, quickly hit the road and changed his clothes. There was no official reaction from him. This is how the fraternization of the Polish and racially correct Galichan people took place.

Understandably, no one was surprised when the provocateur with the egg turned out to be the representative of the Ukrainian fascists. A young man with a Party of Regions backpack would look a bit strange in this context. In our opinion, the subsequent reaction of the racially correct media, “Freedom” and others in the case of the Pygnybok egg is very indicative.

First of all, peace-loving activists of the city organization "Freedom" were sold out. According to the local fascist Svyatoslav with the typical name Borutsky for this region, none of them planned the actions, did not conduct them and was not involved. All local “Svobodovtsy” during the incident were engaged in cross-stitching and first aid to the sick St. Witt dance. Direct speech of Borutsky (“profitable” according to the clinical admirers of the Ukrainian language sample 1926 of the year): “I, as the chairman of the Lutsk city organization VO Svoboda, declare that our organization did not take any actions regarding the arrival of the Polish president to the city of Lutsk conducted. " A backpack with the inscription “Freedom” was stolen from a VO member since 2007, during a party event in the village of Veliky Kosharyshcha. Moreover, according to the local partigenoshaf, the attacker arrived in Lutsk from afar, either from Zaporizhzhya or Nizhny Tagil region. Perhaps from Chelyabinsk. Intelligence agencies provided him with an egg and a specially equipped backpack to cast a shadow on the great fascist ideals.
The head of the Volyn regional administration, Boris Klimchuk, to whom the Elder Comrades had already managed to break through the rib cage in order to prepare the order of the name of the egg Oleg Pyagnibok, picked up the provocation theme. Klimchuk repeated the spell: “In any case, this is not a Volhynian, not a“ Svoboda ”...”. Then he came around a little, drank from the carafe and continued: “By the way, the political party“ Freedom ”behaved very worthily in this situation. We must be higher and not to succumb to provocations. I think it was a moment of provocation. ” Then he received a call from the Elder Fellows and asked if Citizen Klimchuk smelled the Moment glue, and how well did he, for the time being the head of the regional administration, understand the party’s attitude towards early European integration by joining the Customs Union?

In a very difficult situation were representatives of Galicia, working in the media. They unanimously support the courageous act of the young man with the egg of the Pygnyboka and sincerely rejoice at the incident. Some especially exalted females expressed a desire to surrender to this unknown fighter for the freedom and racial purity of the nation. However, it is impossible to rejoice openly, since Tyagnybok is not officially involved in this case. In addition, the information is not familiar to the introduction of the Galich brain: the assault of the police department, Cop lawlessness, immaculately beaten journalists. As a result, they prefer not to talk about the egg of the Yakutia, which is inappropriately broken on the jacket of the “lawyer of Ukraine”. Or, to the best of more than modest intellectual abilities, to develop a theme with provocation. This is somehow closer to them. All life poor, tolerant Galicians provoke. Either the red banner, the St. George ribbon, the chanson, or the genocide of the Polish population of OUN. They actually have a very difficult life. But, nevertheless, the egg with a direct link to "Freedom" has already entered the annals of Ukrainian-Polish relations and added another touch to the image of this wonderful organization, which will soon be on a par with Al-Qaeda.

Ctrl Enter
Noticed oshЫbku Highlight text and press. Ctrl + Enter
We are
Financial and political secrets of Oleg Pyagnibok and Vitaly KlitschkoVolyn's tragedy: why "it is difficult to believe the Poles ..."
Military Reviewin Yandex News
Military Reviewin Google News
87 comments
Information
Dear reader, to leave comments on the publication, you must to register.