Eurozone with barbed wire for Latvia 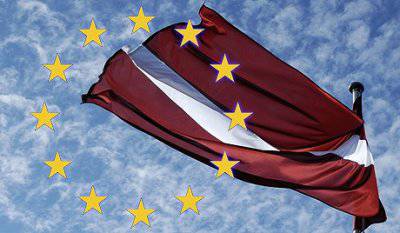 Incredible joy is demonstrated today by representatives of the Latvian authorities. It’s no joke to say that Latvia is becoming the next European Union country, which is being accepted into an even more “friendly” family - into the so-called eurozone. And although according to the “parents” of this zone, the deprivation of “parental rights” for an irresponsible economic policy towards eurozone “children” has long been crying, but these same children, especially adoptive ones such as Latvia, for example, still have to show great joy from hitting the eurozone.


Since January 1, Latvia has been recorded as another foster eurozone child, announced by both gentlemen from Frankfurt and President of the Latvian Bank Ilmars Rimshevich. At the same time, Mr. Rimshevich was so inspired by the entry of his country into the zone of direct circulation of the single European currency (inspired, at least in public), that even the future exchange rate of the euro to lat (1 lat will cost, nothing less than 1,42 euro) as a victory for the “get rid of the shackles” of the Latvian economy. People far from understanding economic laws also hurried to declare the transitional course of the Latvian national currency to the euro the real victory of the Latvian economic policy: they say, gentlemen who managed to declare insolvent the Latvian financial system, our currency is stronger than ever, so strong that even Euro It is worth almost one and a half times cheaper than the monumental lat ... From the “winning” speech of the head of the Bank of Latvia Ilmars Rimshevich:

It is very important to us that nothing will change. It remains the good old lata course, which was maintained during the crisis. Latvia is not going to play or manipulate the course and is not trying to provide excellent conditions for some and less advantageous for others. The European currency (euro) is not in crisis today. And we are talking about problems in specific states of southern Europe, which need to streamline their policies in order to get out of the crisis in five to seven years.

In addition, Rimshevich assured that there will be no price increase in Latvia, except that about 0,4% ...

So here it is - the prophet of the European economic miracle. It turns out that everything is in order in the European economy. It is only “some” Greece with Spain, Italy and Portugal found “small” problems and somewhat prevent the “mega-developed” economies like the economy of Latvia, for example, from being really effective and efficient ... For example, it would seem , Europeans themselves should applaud such words of Mr. Rimshevich, but the fact of the matter is that in the eurozone it is somehow not up to applause.

The old, if I may say so, “zonschiki” (those countries that plunged into the eurozone, unlike Latvia before) understand that Latvia’s accession to this very zone of the common European currency will not be good enough for the Baltic country itself. The reason is that the declared superiority of the lata over one and a half times over the euro (at the exchange rate) during the transition period is a time bomb that can explode and inflict a severe blow on ordinary Latvian citizens, and of non-citizens, respectively. The fact is that the Latvian market, which even today is thoroughly sharpened on European imports, will finally open its doors to products from Western Europe, which will have an advantage over local producers, if only because the single currency rate in relation to lat is delivered (we will guess from three attempts, by whom ...) significantly lower.

China, which states have been trying to impose the yuan appreciation rate on the dollar exchange rate for several years in a row, spits on the “advice” of Washington from a high pagoda, realizing that if the yuan appreciates, the competitive advantages of Chinese companies may come to naught. But this is China, and then Latvia. China in no "zone" does not seek, unlike the Baltic "friends" ...

Thus, Europe gets the opportunity to "break off" those products that have ceased to be in demand within the eurozone, to a new market opening up to all European storms. Naturally, this will in some way breathe power into the crisis European economy, but the question is: for how long? The answer is unequivocal: very, very briefly.

This thesis is also confirmed by representatives of the eurozone itself. In particular, the experts of Spiegel magazine say that the Latvian economy accepted into the “big family” can only aggravate the situation in the euro zone. Why? Because in the Latvian legislation there is a loophole that allows you to launder money transferred from external questionable accounts through remote offshore companies, for example, through the Cayman Islands. At the same time, the German edition unequivocally names the direction of the flows of “dirty” money, which still feed the economy of Latvia and do not allow it to fall to the bottom. These flows come from the bank accounts opened by representatives of oligarchic groups from the CIS countries (Russia in the same list).

Such a thesis is indirectly confirmed by the fact that after the “cleansing” on the “eurozone” Cyprus, the only EU economy that stated the increase in foreign capital (including capital of dubious origin) became the economy of Latvia. This did not hit the euro for the simple reason that Latvia is not a member of the euro zone until 1 in January of 2014. But as soon as this small, but proud Baltic state enters this zone, so does the zone, and the Cyprus variant is waiting for Latvia itself. The zone will be up in arms: if you want to receive loans, make sure that foreign capital (Russian, for example) is arrested in certain banks. And how this system works, we know very well by the example of Aphrodite’s Island and how this very “Aphrodite” with its foreign investments was taken by gentlemen from the eurozone, led by Angela Merkel, who pushed through the Cyprus initiative.

Spiegel also does not like the fact that in Latvia the corporate income tax is 8,5% lower than the European average. Experts of the German magazine fear that such a low tax could turn Latvia into a “safe haven” for all who want to escape from paying taxes at the place of registration of their company. If Spiegel’s fears are confirmed, since January 2014, Latvians may be surprised to see in the information booklets of the Latvia’s accession to the eurozone that the head office, for example, Volkswagen, “moves” to some god-forgotten lane of Daugavpils or the beach of Jurmala ... The head of the Bank of Latvia should definitely be happy, but his joy will obviously not be long, because Frau Merkel does not like when, against the background of difficulties in the European economy, one of the "satellites" suddenly starts to go uphill when using unauthorized Frau Merkel receptions.

And so that Latvian economists suddenly didn’t bump, they were immediately given the bait in the form of a high lat rate against the euro, plus - through the Western European media they hinted non-transparently that it was time to dismantle the soft tax shop. In this regard, one can predict the “delight” that awaits the owners of surviving Latvian enterprises if these same owners know that Riga is forced to raise the tax from 15% to 23,5% in order to comply with Mother Europe ... How many enterprises in Riga’s cities will be forced to stop your work? Let this question be answered by the jubilant Mr. Rimshevich and other representatives of the economic and political forces of Latvia, who so called for the entry of the state into the eurozone.

Ctrl Enter
Noticed oshЫbku Highlight text and press. Ctrl + Enter
We are
Will the Great Wall save Latvia? Why build a fence on the border with Russia and Belarus?Republic of the former USSR. Latvia: years without “occupiers”
Military Reviewin Yandex News
Military Reviewin Google News
110 comments
Information
Dear reader, to leave comments on the publication, you must to register.