Twenty eight. It is more than arithmetic 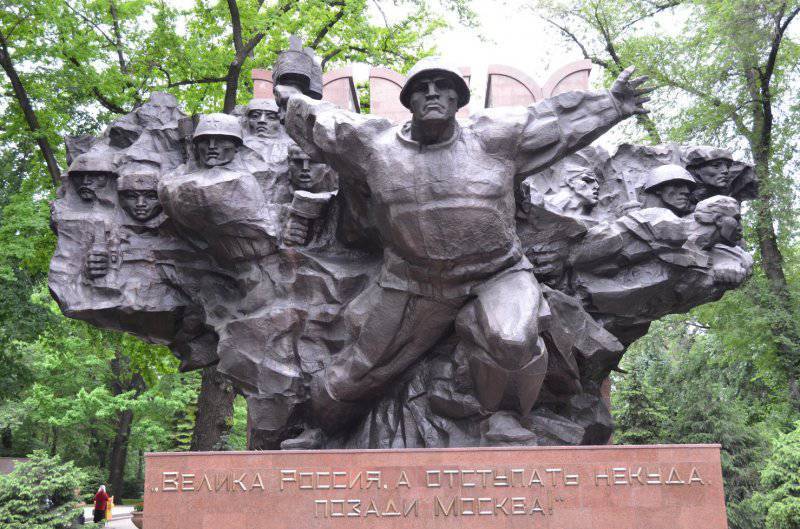 Recently, the 28 Panfilov theme has become very popular. The reason for this was the attempt by a group of enthusiasts, tired of the mud of the war, made by eminent creators with state money, to create a film about the legendary feat of the junction Dubosekovo.


A good idea - and deserving of a good implementation. But enthusiasts didn’t have time to start collecting money for the filming, as “historical objectivists "raised a muddy wave:" there was no such feat, the reporter invented everything !!! ". Although there is a huge distance between the reporter’s invention and the lack of feat, and one does not follow from the other.

So let's try to look, at least superficially, at who the Panfilov members are, what happened under Dubosekovo.

... A division was formed that received the 316 number in Alma-Ata after the start of the war. Formed it for a month from the Russian and Kazakhs, in the bulk did not even pass the military service. That is, in fact, from recruits who had neither combat experience nor military training.

At the completion of the formation, the division was transferred by rail near Novgorod, to the most intense at that moment North-West direction. But a month later, due to the outbreak of the Germans on Moscow (Operation Typhoon), the 316 Division was transferred to the central area. October 5 began the transfer, and October 12 division was unloaded near Volokolamsk, where she began to prepare its defensive line within the Mozhaisk line of defense. The total length of this boundary, from the Bolychevo state farm to the village of Lvovo, was 41 km.

Here you need to make a small digression. According to the tactical instructions and military views adopted on the 1940 in the Red Army, the rifle division should have received a defensive line in 6-8 km in defense and 10-12 km in the secondary direction in the direction of the main attack of the enemy. The 316 Division, unstretched, of the recruits who did not have the full roster, received a lane in 41 km. And this is in the direction of the main attack. That is, the length of the front of the division in 5 (!) Was more than the normative, and for each kilometer of the front there were fewer soldiers and fire weapons in 5 than was considered necessary to create a sufficiently strong defense.

The lack of guns in the Panfilov division itself (54 guns), on the one hand, was more than offset by the reinforcement units attached to them (another 141 gun). But, on the other hand, this reinforcement was greatly depreciated by the lack of ammunition. That is, in general, the defense, although very well-organized, was very "liquid", having several times less than it should be, the density of troops and fire weapons.

German troops, developing initial success, entered the Mozhaisk line of defense by October 15. In the Volokolamsk area, units of the 5th Army and 46th Motorized Corps were advancing. Against the 316th division were the German 2nd and 11th tank and 35th Infantry Division. All formations were perfectly armed and had great combat experience. The Germans expected to easily knock Panfilov’s off the line.

October 16 The 2 Panzer Division unsuccessfully attacked the left flank of the Panfilov division, the positions of the 1075 regiment. German attacks were repelled. October 17 was hit by a large force. In the course of several attacks, the Germans were able to advance literally a mile away, the defense of the Panfilovites resisted. On October 18, the Germans strengthened the attacking group even more and forced the 1075 regiment to withdraw. But the Germans were stopped by the heroic resistance of the artillery units and managed to reach only Ruza.

Total: in three days of fierce fighting, having a huge numerical and fire superiority and relying on complete air supremacy, the Germans managed to move only a few kilometers. Panfilov Division resisted.

Having failed on the left flank of the division, the Germans attacked the right, on the 1077 regiment, repeating the onslaught and on the left flank. The Germans again managed to advance slightly on both flanks. But again, they failed to overthrow the 316 division. Despite the hardest losses, the acute shortage of ammunition, the repeated superiority of the enemy, the Panfilov members continued to hold the front. Volokolamsk was left by them only at the end of October, when the Germans broke through in other areas and there was a threat of encircling the division.

What happened before Dubosekovo? The Germans, leading a swift (according to plans) attack on Moscow, managed to move less than two dozen kilometers along the Volokolamsk direction in half a month of fighting. And they got up, pulling up reinforcements and rear. 2 November front line stabilized.

Was this a feat?

Yes, it was generally a miracle.

When the thin-line division of recruits who lacked ammunition for a long time stopped at times a superior experienced enemy. And those recruits who, under a terrible onslaught, retreated on one day, firmly held their positions for the next.

... November 16 began the next phase of the German offensive. In this case, the German strike was a counter.

From the conversation between Stalin and Zhukov from November 10: “Shaposhnikov and I believe that we must thwart the enemy’s preparing strike with our preemptive counterstrikes. One counterstrike must be applied to bypass Volokolamsk from the north ... In the area of ​​Volokolamsk, use the right-flank formations of the Rokosovsky army, the tank division and the cavalry, which is located in the region of Klina. "

On November 15, the tank-cavalry group struck north of the positions of the 316 division. The impact of inexperienced and small parts, although it was an initial success, did not develop. November 16 was supposed to hit the 316 Division in support of the upcoming neighbors. And she was preparing to attack. But she was on the edge of the German strike.

At the time of the German strike, the neighbors of the Panfilov division were already in a desperate situation, and the division itself, which was about to attack, was struck at least three times by the superior forces of the enemy. 4-I tank group Wehrmacht rushed to Moscow.

In theory, with such introductory 316-division I should have been swept away immediately. Three Germans fell upon our division. The positions of the 1075 regiment stretched from the exit from Volokolamsk to the junction Dubosekovo. That is, one not fully equipped regiment had a larger front than it was supposed to in the defense of a full-fledged division. On the Novo-Nikolskoye (now Bolshoy Nikolskoye) -Dubosekovo section, that is, on the front in 4 km, the 2-th battalion of the 1075-th regiment defended. Actually, at Dubosekovo-Petelino, the 4 th company of the 2 battalion of the 1075 regiment, the one in which the political instructor, the legendary Klochkov, was, was holding the defense. That is, the company, which included less than a hundred and fifty soldiers, accounted for more than a kilometer of front in an open field.

The 1075 TD struck the positions of the 11 regiment. In this case, the main blow fell on the 2 th battalion. With the indicated density of defense, with such a difference in forces, it is impossible to hold a front with a counter strike. But the Panfilov Division held out. He stayed long, impossible for long hours and the 2 th battalion. The first blow of the Germans fought off. The second blow of the German Panzer Division crushed the battalion. But the units retreated with battles, with terrible losses, but delaying the enemy. A 4-20 man remained in the 25 th company. That is about one out of every six. The Germans from 16 to 20 November, for the 5 days of battles, managed to advance only to Nismeny, that is, to 12 km

It was during these battles that the division was awarded and became an example to follow. 17 November she was awarded the Order of the Red Banner, 18 November awarded the title of the Guard.

Were these battles heroic? Were the feat Panfilov?

Well, what else? What other name can you think of?

And what about a journalist from the front line (from the front, not from the computer screen in a comfortable office! In the midst of a fierce battle, and not between coffee cups!) Did not accurately list the names - which, if not secret, matters in assessing the feat?

One way or another - the figure “28” is forever imprinted in our history.

And historical science is powerless here, not to mention arithmetic and statistics.

The fact that the Spartans in Thermopylae were not exactly 300, that the Phocians remained with them, the fact that the Persian forces of the Greeks exaggerated - did it somehow cancel the feat of the people who died for the freedom of their country and delayed their many times superior enemy?

The feat of the Panfilovs is greater than the feat of the ancient heroes. He is bigger because recruits committed it against the most experienced enemy, and not the recognized best warriors of their time. And these recruits fought from day to day, for months, becoming in a short time veterans, and then a guard.

And we are no longer given to know all the details of this feat, the feat of each company. And when it is not possible to find out all the facts - the legend remains.

But this legend is true, because it speaks of the real feat of real people.

Because no one invented German tanks. And in the capital of our country they were never seen, including because they were met by non-invented Panfilov members.

I personally want a film about Panfilovs to be made. And that it was a film about heroes whose glory is immortal. And no matter how many characters will be said in the film. It is important not to forget - the whole division was heroic. And such a division was not the only one in the Red Army.

And it was these heroes who died for the freedom of our country and our people, saved her.