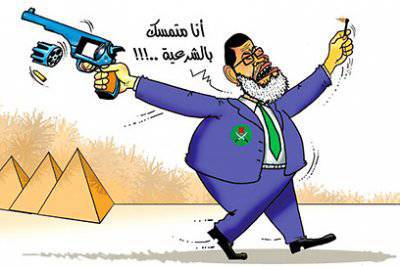 Of course, the main theme of the week became offset by a military coup from the post of Egyptian President Mohammed Mursi. Mursi still continues to consider himself a legally elected presidentbut from the fate of Hosni Mubarak his now hardly something will save. In any case, the events that have happened within the framework of the Middle East, and indeed the entire geopolitical mosaic of the world, are important and ambiguous. So it makes sense to analyze them a bit.


Mohammed Mursi, who came with the support of the Muslim Brotherhood in power in Egypt as a result of the election of 17 on June 2012, for the year in power managed to “do” things for more than a few years and ten years. From the main you can remember Pharaoh's Egyptian Constitutionwhich Mursi lobbied and also the recent severance of relations with the official authorities of Syria. In fact, Mursi, convicted by the sole authority in Egypt's 85-ti million, with its policy, represented a "time bomb" for the entire Middle East. In addition to Mursi, the same "bombs" were Turkish Prime Minister Recep Erdogan, the Qatari dynasty of Al-Thani and the Saudi dynasty to KSA. As you know, after the protests in Turkey started in early June of this year, Erdogan was ready to coordinate actions on the Syrian issue, well, and Mursi ended his career this week. Both are largely due to certain forces inside these countries, who do not want to be drawn into the Middle Eastern adventure imposed from outside. So now, in essence, only Qatar continued to remain the core of the destabilization of the Middle East, which was recently headed by Emir Tamim bin-Hamad At-Thani, the young continuer of his father’s affairs, and the Kingdom of Saudi Arabia, risking going into oblivion immediately after the death of current King Abdullah Ibn-Abdel Aziz Al Saud But back to Egypt ...

Often enough all sorts of "experts" make all sorts of conclusions regarding the factors of certain events in the Middle East. So now, in the Runet, the western “duck” is massively replicating that Qatar and Saudi Arabia are “merged” by Mursi, and indeed Qatar and KSA carry out different policies in Egypt. Qatar, they say, supports the Muslim Brotherhood, 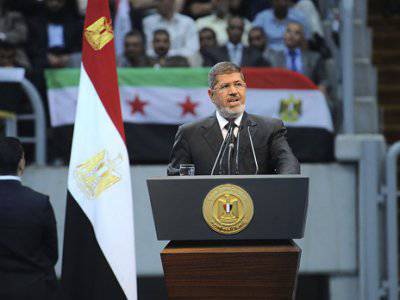 and KSA - local Salafis. And they are not very friendly. First, it should be immediately noted that the Wahhabis are the same Salafis. In Egypt, the Wahhabis Muslim Brothers, who call for the creation of the Great Islamic Caliphate, are de facto (they themselves do not consider themselves to be the creation of the Great Islamic Caliphate), and the Salafis from Hizb al-Nur enjoy the support of both Qatar and KSA, while adhering to almost identical ideology and completely identical goals. So, the resignation of Mohammed Mursi for Qatar and KSA is the loss of a huge political and economic asset. The power in Egypt again took over the military. And this means the removal of all the Salafi-Wahhabi guardians of the "political Islam" of a radical nature from the internal politics of Egypt. Yes, Egypt will continue to conduct pro-American policies in the region. The United States regularly paid for the army of Egypt. 1,3 billion dollars a year. Egypt will continue to pursue a loyal policy towards Israel. But at the same time, Egypt will stop playing jihad on orders from Doha and Riyadh under the tacit approval of Washington. And it threatens to a great failure for the entire “Greater Middle East”.

In general, initially the coming of the Muslim Brotherhood to power in Egypt was like a gambit. The military on the basis of sentiment in Egyptian society allowed Egypt to "steer" representatives of this movement. And then, having waited for the right degree of discontent in society with the policies of Mursi and Co., they removed the Muslim Brotherhood from Egyptian politics in one fell swoop, and didn’t let them do real big "deeds." Now, a return to power in Egypt of radical Islamists is hardly possible even in the medium term, although the protests of the Muslim Brotherhood and Co. in Egypt will certainly continue. And that means that Egypt will cease active participation in all sorts of adventures in the Middle East. It is very happy. It’s only a pity that the military leadership in Turkey has become very relaxed since the days of Kemal Ataturk ...

Ctrl Enter
Noticed oshЫbku Highlight text and press. Ctrl + Enter
We are
For a revolution or a counter-revolution? The role of the military in the politics of EgyptForeign religious influence on the Muslims of Tatarstan in the post-Soviet period
23 comments
Information
Dear reader, to leave comments on the publication, you must to register.