The latest apocalyptic forecasts of Western economists: the collapse of oil prices, the crisis in Russia

July 5 2013
82
Our western "partners" continue to write horror stories for those economies of the world that, as they say, are tied to the prices of hydrocarbons. One of these economies, as we are well aware, is the financial system of Russia, economic well-being and, as a result, the strengthening of the geopolitical role of which are clearly not included in the plans of the mentioned partners. 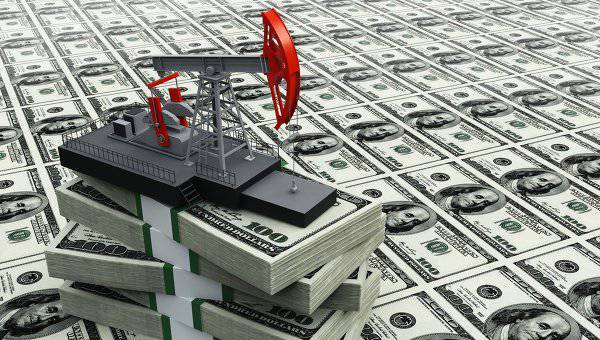 So, the other forecast of the next western forecaster was published the other day, the total number of which is legion. At this time, John John Levellin, who at one time headed the Organization for Economic Cooperation and Development, shared his vision with the world economic community about the development of the situation on the oil market. Mr. Levellin concocted his apocalyptic prediction together with an office like Puma Energy. So what is the prognostic apocalypticism of Mr. Levellin?

It turns out that literally through 7-8 years the world expects a situation opposite to that which manifested itself in the 70-s of the last century.

To make it clear what is at stake, we touch historical retrospective oil prices. Before the Arab-Israeli war of 1973, the price of “black gold,” which no one thought seriously to call gold at that time, resembled something purely symbolic. The developed West bought oil in countries where production was at a high level, at a price of about a dollar per barrel. For example, in 1973 (before the start of the conflict), the price of a barrel of oil in the world was $ 1,27, and, obviously, more than satisfied the United States and Great Britain, which “fed” oil at bargain prices, developing their economies.

In the 1973 conflict, the same United States, Great Britain and a number of other Western states unequivocally supported Israel in the “Doomsday War”. This caused a storm of indignation in the Arab world. The perturbation resulted in the nationalization of oil rigs, which in most cases were owned by American and British companies, who were taking 78% net profit from oil production by themselves. After the nationalization of the towers, a number of Arab countries declare an embargo on the supply of crude oil to the West.

The price of a barrel soars 5 times, but still remains quite low (compared to today's prices). During the following years, when the US economy was forced to go into a deficit due to the war in Vietnam, the oil went up in comparison with 1973 a year almost 15 times! As they say, a freebie of one dollar per barrel has come to an end, and with it came the understanding that oil is not just an energy carrier, but also a strategic resource that can painfully click on the nose of even the most superpower thinking about itself.

Since then, the West has had to get into debt more and more to ensure the growth of its economy at the expense of other countries' oil resources. And so that the debts could somehow be reduced and lead to a digestible value, the strategy of the so-called oil wars was developed. Over time, the planet has deigned to watch these wars in Iraq (twice), Libya and other countries of the world. The United States even urgently had to make friends with the main "democrats" of the Middle East - the monarchies of the Arabian Peninsula, who eventually began to think a lot about themselves, wielding friendship with the States and often trying to dictate conditions from the height of their dwarf growth.

Naturally, the dependence on the price of oil and, as a result, the dependence on the mood of the oil-producing countries of the USA was not impressive. And that is why the West, headed by the same States, is already 40 for years, trying with all its might to bring back the times when oil was worth pennies and gave huge profits to economies that use it to develop the industrial sector.
Another gentleman who decided to find an opportunity to return peace to 1973 the year when oil flowed like a river at one dollar price, and John Levellin mentioned at the beginning of the material became. He said that in 2020, the world price of oil could fall by half, and eventually it would come to the 30-dollar mark. At the same time, the forecaster claims that this process will bury the economies of those countries that today lead the oil industry in the classical way and will bring to a new level those countries that are producing shale hydrocarbons.

The direction of Levellin's forecast is understandable. He needs to somehow cheer up those authorities who give him (gave) work. And for these same authorities, there is no better encouragement than the news in the form of a forecast of an “expert” that the Western economy, by 2020, will again break out to the place that is ahead of the rest of the world, having buried the world’s oil-producing leaders in their fragments. , for example). They say that we are still hoo, we will show you the American “gadget mother” with our slates. If Levellin and his colleagues took off their shoes and patted them on the podium - it would be even more convincing ...

Meanwhile, with all due respect to the authority of such an unsinkable forecaster, whom Lewellin has been lately, other forecasts must also be taken into account. As they say, slates are shale, and no one has canceled the tendency for the exhaustion of natural resources. To produce hydrocarbons every year is becoming more difficult, and, therefore, economically more expensive. If so, can oil fall three times in price, as the prognostic report of the said gentleman says. After all, it is possible in the Sahara to try to grow wheat, bringing black soil, tons of water, labor, and fertilizer. Will a ton of wheat grown anywhere in the Stavropol region or in Canada become cheaper from the appearance of Saharan wheat on the market? The probability of that is negligible.

By the way, the report of Levellin has nothing to do with reality, they say in the International Monetary Fund. They conducted their own research of the oil market and on this basis announced that due to the decline in world oil reserves and the need to use new (more expensive) technologies for its production, the price of a barrel of oil will at least remain in the corridor in which it is now, and, at most, will grow. And waiting for the price of “black gold” to fall to 30-35 dollars per barrel can either impassable romantics, or those who wish to make a comforting compliment to the Western economy and hurt those for whom falling oil prices, to put it mildly, is not good news .

Today, the price of a barrel of oil is at around 103-106 dollars per barrel. A certain increase in the price of oil in recent days has occurred due to the new Egyptian revolutionary manifestations. As is known, President Mursi, who was elected after the overthrow of Mubarak, became the next victim of the victorious “democracy”. Mohammed Mursi is now in the hands of the military, who will decide his future fate. And you have to do the same: American “achievements” in the extraction of shale oil didn’t understand, they couldn’t affect the price jump associated with the overthrow of the Egyptian president ... Why couldn’t the oil shale to keep oil at the right price for the USA? I would like to address this question to Mr. Levellin. Maybe because the shale revolution in oil production is more like a fiction that interested parties are trying to, forgive, vtyuhat, presenting the desired for the real.

Well, in order for Levellin and his fellow gentlemen to draw less attention, it’s time for the Russian authorities to think about how real it is, and not in words, to jump off the oil needle on which the Russian economic system is sitting. In principle, it is known how ... Only this is what our esteemed oil gobblers will say to this - a question that, it seems, our authorities care much more than what situation this total dependence can lead the country in the end.

Ctrl Enter
Noticed oshЫbku Highlight text and press. Ctrl + Enter
We are
Oil: how optimists were mistakenOil separately, people separately
82 comments
Information
Dear reader, to leave comments on the publication, you must to register.